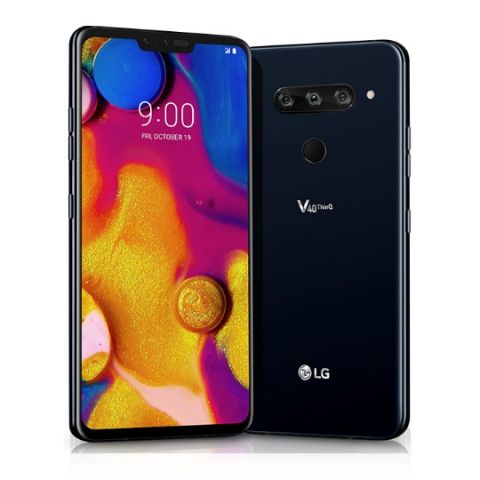 The LG V40 ThinQ comes equipped with a 78-degree standard lens, a telephoto zoom, and a super wide-angle lens. The phone enables one to capture three images, one with each lens, in a single shot.

LG has launched its fourth flagship smartphone of 2018, the LG V40 ThinQ, soon after revealing its design. It is indeed a flagship device, on paper, with the top-of-the-line specifications and the trendy notched display. However, the key highlight of the phone is that it gets five cameras in total with three on the rear and two on the front. The smartphone runs on the latest Qualcomm processor and it also comes with IP68 water and dust resistance with Military-grade (MIL-STD-810) certification. There’s also a BoomBox speaker and the now going obsolete 3.5mm audio jack on the device, which can relay audio via a 32-bit Quad DAC.

The LG V40 ThinQ smartphone runs on the latest Snapdragon 845 SoC, coupled with 6GB of LPDDR4X RAM and 128GB of UFS2.1 internal storage. Its internal storage can also be expanded up to 2TB via a microSD card. The device features a 6.4-inch QHD+ OLED FullVision screen with 3120x1440p resolution, which is protected by Corning Gorilla Glass 5, and a 19.5:9 display aspect ratio. Equipped with a 3300mAh battery, the handset supports fast wireless charging and Quick Charge 3.0 when being charged the old-fashioned way.

Coming to the device’s main attraction, the optics. The LG V40 ThinQ features a unique triple main camera setup with a 78-degree standard, a 45-degree telephoto zoom, and a 107 degree super wide-angle lens. What’s unique is that one can capture an image in all the three modes with a click. The standard main camera features a f/1.5 12MP sensor with 1.4µm pixels, which is considerably larger than the 1.0µm pixels of the LG V35 and the LG G7. The main camera supports Optical Image Stabilization (OIS) and this is the first LG phone to offer Dual Pixel AutoFocus. The telephoto lens is paired with a 12MP sensor with f/2.4 lens, while the wide-angle lens gets a 16MP sensor.

At the front, the LG V40 ThinQ sports a dual camera setup with an 8MP, 26mm standard lens paired with a 5MP, 21mm wide angle lens. There’s also a Triple Shot feature that creates a video or a GIF out of the three images. AI is also used for helping users compose their shot as it is said to recognise people in the frame and help users frame the image using “rule of thirds” composition. LG says, “AI Cam recognizes what you’re shooting and suggests the best filter, while AI Composition adjusts the position of your subject for artistically balanced photos.”

In terms of its flagship specs and optics, the LG V40 ThinQ goes up directly against the Huawei P20 Pro (review), which also features a triple rear camera setup. However, unlike LG’s use of three different lenses, the P20 Pro comes equipped with a 40 MP RGB 1/1.7-inch sensor, a 20 MP monochrome sensor and an 8MP sensor with a telephoto lens. There’s no wide angle lens for those zoomed out shots, which you will be able to get with the new LG phone. The main camera of the Huawei P20 Pro supports 10x digital zoom, and 5x lossless hybrid zoom. On the front, the P20 Pro does not feature dual cameras but is equipped with a 24.8MP camera which supports 3D portrait lighting effect for adjusting the lighting in an image after one shoots it. The device also comes with a 360-degree face unlock feature, which is said to unlock the device in under a second. It remains to be seen how the LG V40 ThinQ compares with it but rest assured, we will test it when it comes in for review, but it should make for a good flagship camera comparison.

Seeing that smartphone makers are constantly looking to up the number of cameras they offer on devices, one can expect future flagship and even mid-range devices to house more than 2-3 primary cameras. In fact, it is rumoured that Nokia is working on a penta-lens smartphone reportedly called the Nokia 9.

Samsung also recently launched its first smartphone with three rear cameras, the Galaxy A7 (2018). It comes equipped with an 8MP 120 degree Ultra Wide Lens, a 5MP lens for controlling the depth of field, and the third one is a 24MP lens that is said to automatically let more light in by combining four pixels into one pixel in low light conditions. It should be noted that while LG and Huawei have put three cameras on their flagship phones, Samsung has used in a smartphone that starts at Rs 23,990.

The LG V40 ThinQ will be available in the US from October 18 with prices starting at $900 (Rs 66,379 approx). The cost of buying it will vary in every country. There is no word yet on its availability and price in India.