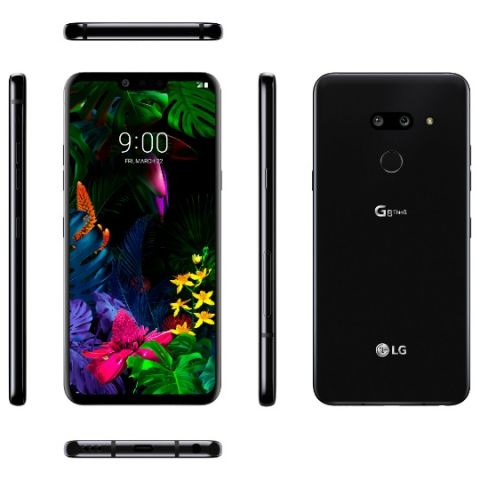 A new image of the LG G8 ThinQ has surfaced online, giving a look at the handset’s design.

LG is speculated to announce its LG G8 ThinQ smartphone at MWC 2019. However, ahead of the official unveiling, an image of the handset have been posted online by the well-known tipster Evan Blass. The image showcases the upcoming phone from every angle, suggesting its design from the front, rear and sides. If the image can be believed, LG might not depart much for the G8 ThinQ, especially when it comes to the design department. We see the display of the phone is almost bezel-less but with a notch on top. The chin on the front is also quite visible and one will notice a single camera on the front.

On the back, the LG G8 ThinQ can also be seen with a centrally placed horizontal dual-camera setup. An LED flash is placed aside the cameras and a fingerprint sensor can be seen directly below the sensors. The company has already confirmed that it will equip the upcoming phone with a Time of Flight (ToF) sensor manufactured by Infineon that is said to work similar to how Apple’s FaceID works. Coming back to the leaked image, the volume rockers can be seen on the left edge of the handset, along with a dedicated button for invoking the Google Assistant. On the right spine, the power button and SIM tray are placed. On the bottom edge, the USB Type-C port is placed between the speaker and a headphone jack.

There have already been numerous leaks regarding the LG G8 ThinQ and as per the latest report, it could be announced in a 128GB storage option. Additionally, reports suggest that the handset could be priced at CAD 1199 (approx Rs 64,136). In terms of hardware, the smartphone is said to launch running on the Qualcomm Snapdragon 855 and could feature a 6.1-inch 19.5:9 display. It might also feature ‘sound on display’ technology, enabling it to route audio through the screen and this tech increases the chances of the device coming equipped with an OLED panel.