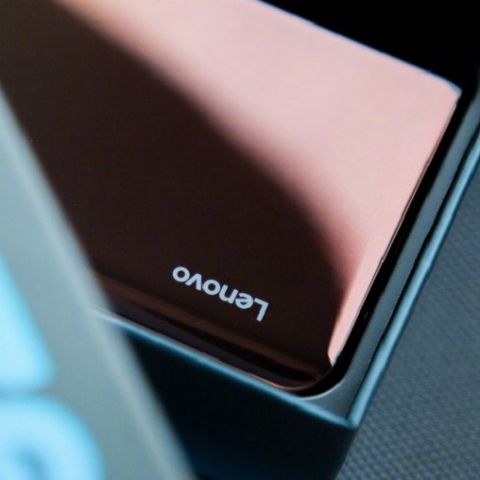 The phone will sport a 6.39-inch OLED panel with HDR10 support.

It is claimed to be the lightest phone with 4000mAh battery.

Lenovo Z6 will be launched at 11:30 am local time (9:00 am India time) on July 4 in China, and two days ahead of the event, Lenovo Group Vice President Chang Cheng has shared an image unveiling the design and almost all the key specifications of the phone. He is responsible for intermittent release of the details about the upcoming Lenovo Z6 smartphone. Below is the round-up of all the specifications that are known so far.

The Lenovo looks a lot like the Z6 Youth Edition and sports a near edge-to-edge display. The display has a waterdrop notch and a chin. The phone features an in-display fingerprint sensor, which is claimed to unlock the device in 0.13 seconds. The phone sports a 6.39-inch OLED display with HDR10 support and a 120Hz refresh rate. Lenovo claims that the phone has 93.1-percent screen-to-body ratio. On the back, it has a vertically aligned triple camera setup placed on the top left corner. The image shows a blue coloured back panel with a gradient pattern.The Z6 is said to have nano-coating for durability and the back panel of the phone is claimed to have 10 layers of NCVM vacuum nano-coating that gives it a 3D effect. 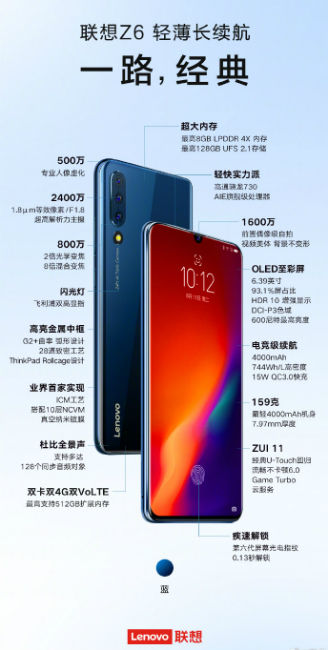 It has already been confirmed that the phone is a mid-range device with a Qualcomm Snapdragon 730 chipset under the hood. The CPU is said to be clocked at 2.2GHz and is touted to deliver 35 percent improved performance over its predecessor. The device will be offered with up to 8GB LPDDR4 RAM and up to 128GB UFS 2.1 storage. The phone will run ZUI 11 custom OS based on Android 9.0. To ‘enhance’ the gaming performance, the phone will come equipped with Game Turbo technology.

When it comes to camera, the Lenovo Z6 will sport a triple camera setup. The primary camera will have a 24MP Sony IMX576 sensor with an f/1.8 aperture lens. It is combined with an 8MP telephoto lens with 2x optical zoom and 8x hybrid zoom support. The third is a 5MP depth sensor, while on the front, the phone is equipped with a 16MP sensor. Further, Cheng claims that the Lenovo Z4 will be the lightest phone (159 grams) with a 4000mAh battery in the industry. The battery will have 15W Quick Charge 3.0 support. Lenovo says that it has used the rollcage design of the ThinkPad laptops to shed the Lenovo Z6’s weight. The company claims that the Lenovo Z6 has a durable and drop-proof 6000-series aluminum frame.