Lava has entered the budget quad-core smartphone race with the Xolo Q800. Priced at Rs. 12,499 the device is a direct, but slightly smaller competitor to the Micromax Canvas HD. We compare both smartphones and see how they stack up! 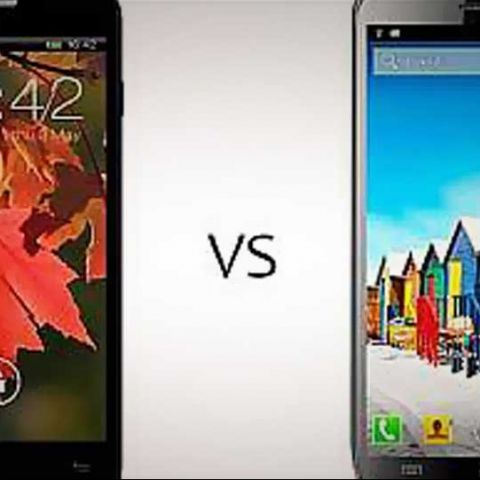 Yesterday, Lava launched the Xolo Q800. It is a budget smartphone that boasts of a quad-core processor on the MediaTek MT6589 chipset. Does the name of the chipset sound familiar?

Well, that is because it is the same chipset that is powering the Micromax A116 Canvas HD. The Canvas HD is the first budget smartphone to launch in India that showed off a quad-core processor along with a 720p HD display.

After Micromax and its Canvas HD, quite a few other devices have adopted MediaTek's MT6589 chipset, such as the WickedLeak Wammy Passion, and the Jiayu G4. Yesterday, Lava entered this race with the launch of the Xolo Q800.

Let us start with a quick look at the specifications of the two smartphones – the Canvas HD and the Q800.

On the specifications front, it is easy to say that both the devices are nearly at par when it comes to the processor and the raw power under the hood. The display of the Canvas HD is 5-inches, making it a phablet. It has a display resolution of 1280x720 pixels giving it a pixel density of 294ppi. The Xolo Q800 on the other hand has the traditional 4.5-inch display with a 960x540 pixel resolution. This means that that it has a pixel density of 244ppi.

The difference in the pixel density of the display of the two smartphones is a mere 50ppi and only a well-trained eye will be able to make out the difference in the sharpness and the overall quality of the resolution. To the naked eye, both the Xolo Q800’s and Canvas HD’s displays will look good, as their panels are IPS and the pixel density is high. We have spent a great deal of time with the Canvas HD and we can say that the display is one of the best we have seen on a sub 15k smartphone. It has very vibrant colours, the black levels look deep and the viewing angles are good. It’s safe to say that the Canvas HD has one of the best displays we have seen on a budget smartphone.

The only advantage that the Xolo Q800 has over the canvas HD is that the display is 4.5-inches and hence will appeal to those who don’t want a behemoth in their pockets. We are waiting to get our hands on the Xolo Q800 so we can have a more in-depth analysis of the two devices.

Both, the Xolo Q800 and the Canvas HD have the MediaTek MT 6589 chipset with a quad-core processor clocked at 1.2GHz coupled with 1GB of RAM. The PowerVR SGX544 GPU handles the graphics on both the smartphones. In our experience with the canvas HD, the performance of the device was very smooth. Be it in multitasking, running some heavy-duty apps or playing games. The device was really smooth but plagued with the occasional crashes and bugs found on all budget smartphones. The only real problem we faced with the Canvas HD is that the smartphone refused to run the Flipboard app. The launcher of the Canvas HD would crash and it was a task restoring the device. Hopefully, this problem won’t present with the Xolo Q800 but we will have to wait and see what bugs plague the smartph

one when it lands in our labs for review. Both the Xolo Q800 and the Canvas HD show off 4GB built-in storage expandable up to 32GB via a microSD card. With the smaller display, we predict the Q800’s graphical performance might just be better than the Canvas HD.

Both the Xolo Q800 and the Canvas HD sport an 8MP camera. In our camera review of the Canvas HD, we found that the performance of the camera was quite good. The camera is very responsive in terms of shutter lag, though it wasn’t as fast in the focusing department.

The Canvas HD camera’s engine has been tweaked to bump-up the colour saturation, producing punchy colours and images with a hint of exaggerated contrast. The obvious negative side of the extra vibrant colours is that the images don’t look very natural. There is an obvious warm tone to all colours, which becomes evident when you are shooting frames with a lot of red, pink and yellow tones. Given its usage scenario, where most users are looking for pleasing images with vibrant colours from their smartphones, and using them mainly for web postings, the extra vibrancy isn’t necessarily a bad thing.

While shooting indoors and in low-light with the Canvas HD, we encountered a consistent problem of ending up with blurry images. This could be the result of the electronic shutter dropping down the shutter speed to below 1/10 of a second, to avoid noise and maintain exposure. In contrast, most cameras in challenging light conditions would either give dark, under-exposed images or they’d be very noisy, but the results won’t turn out blurry. While you can attempt to fix underexposed and noisy images with some post-processing, blurry images unfortunately are mostly unusable.

Now, the advantage that the Xolo Q800 has over the Canvas HD in terms of the camera is that it has an 8MP rear BSI camera. With the addition of back side illumination, we think that the Q800 will be able to take better images especially in low light conditions. But we will reserve this judgment until we get our hands on the Q800.

The Canvas HD has a light skin but for the most part you get a raw Android experience and that is a good thing. There is no information about the skin or the preloaded apps available on the Q800. In our opinion, the lighter the skin, the better.

Apart from the occasional app crashing, we are quite happy with the performance of the Canvas HD. It has the first mover’s advantage in terms of launch but the competition isn’t far behind. The Xolo Q800 has the same specifications as the Canvas HD apart from the display and the battery capacity. One major disadvantage of the Canvas HD is that the display lacks a Gorilla Glass making it susceptible to scratches – the Lava Xolo Q800 doesn’t have such a rating either. On paper it seems that the Xolo Q800 will be a good performer device but we still reserve our final judgment for our review of the Xolo Q800.