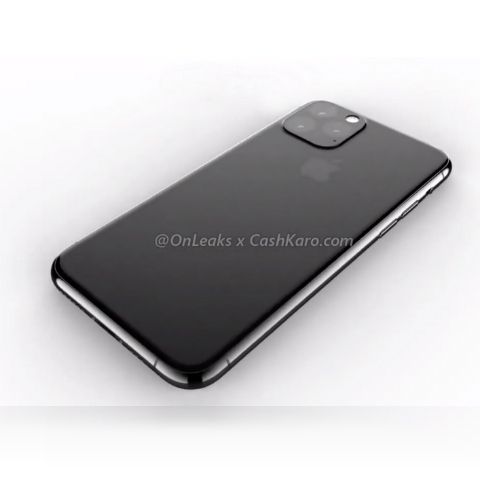 The leaked images and a video are reportedly based on ‘Final’ CAD renders of the phone.

While we are quite confident of the early render we posted of the iPhone XI, there were chances that Apple might change its design by the time the phone launches. However, new "final" CAD-based renders the smartphone haveonce again leaked online, suggesting that Apple cpuld have decided to stick with the unusually huge and protruding square triple-rear camera setup. The leak comes from known tipster OnLeaks, in partnership with CashKaro. It re-iterates our previous leak, which was also in partnership with OnLeaks, that the upcoming iPhone XS successor, rumoured to be called the iPhone XI, might end up with a square shaped rear camera module housing three cameras and an LED flash.

The iPhone XI is said to come equipped with a 5.8-inch OLED display, which is the same size as the iPhone XS. However, the bezels will be comparatively reduced as seen in the renders. The size of the notch looks to be the same as the iPhone XS in the new renders. The handset is said to sport dimensions of 143.9 x 71.4 x 7.8mm and the thickness bumps up to 9mm taking the main camera into account. The iPhone XI's rear panel might be made out of a single slab of glass and the rear camera will be a part of it. The one thing different from our early renders is the placement of the mic, which has slightly shifted in these new renders.

There will apparently be a ‘mute’ button on the device, which is most probably the notification slider. The lightning port can be spotted on the phone’s bottom edge, contrary to rumours of Apple switching to a USB Type-C port on this year’s iPhones. The company is expected to unveil the successors to the iPhone XS, XS Max, and XR in September. As per Apple analyst Ming-Chi Kuo, these 2019 iPhones are expected to feature 5.8-inch OLED, 6.5-inch OLED, and 6.1-inch LCD displays. Some of more prominent changes predicted to hit the new iPhones XI series this year include - bigger batteries, an upgraded Face ID system with a higher power flood illuminator, reverse or bilateral wireless charging to charge other devices, and a triple camera setup which includes wide, telephoto, and ultra-wide lenses.

As mentioned earlier, these render images and the video are said to be based on the ‘final’ CAD renders of the phone, however, final designs are still subject to change.