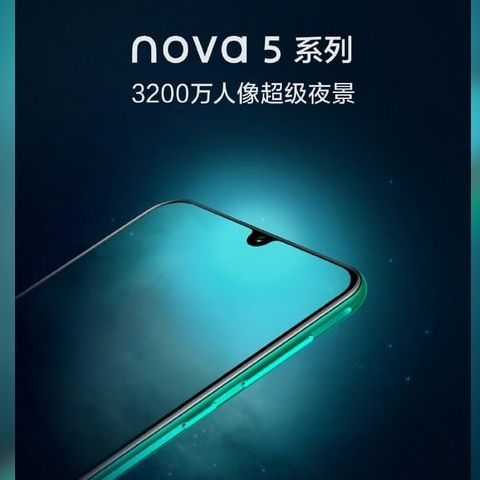 Huawei will be announcing the Nova 5 series on June 21.

To gather more hype around the series, Huawei took to Weibo to officially state that the Nova 5 series will sport a waterdrop notch housing a 32MP front camera.

The Nova series will have three smartphones — Nova 5, Nova 5 Pro and the Nova 5i.

Huawei will be announcing the Nova 5 series on June 21 and the series will feature a 32MP camera on the front. To gather more hype around the series, Huawei took to Weibo to officially state that the Nova 5 series will sport a waterdrop notch housing a 32MP front camera. The official teaser poster also shows a device with a waterdrop notch while the accompanying text reveals the camera inside the notch is of 32MP resolution which will come with a dedicated night mode for selfies.

Huawei’s Weibo account shows the poster of the upcoming Nova 5 series and the design and colour of the phone resembles the Nova 5 Pro that’s already been listed on JD.com, a Chinese e-commerce site for pre-order.

Previous leaks did claim that the Huawei Nova 5i will be powered by the Kirin 710 SoC, which is not surprising, considering it will be aimed at the mid-range segment. The Nova 5 Pro, on the other hand, will be powered by the Kirin 980, Huawei’s flagship chipset for 2019. The Nova 5i will supposedly sport a 6.4-inch FHD+ display with a quad camera stack on the back. Apart from that, there’s little that’s confirmed about the upcoming series.

Huawei will be debuting the Nova 5 series in China next week. Stay tuned for more details.