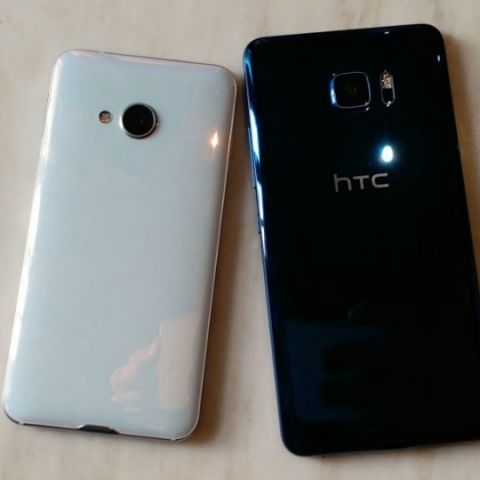 HTC has launched the U Ultra and the U Play in India and are priced at Rs. 59,990 (MOP) and Rs. 39,990 (MOP) respectively. The HTC U Ultra will be available from March 6, while the HTC U Play will be available from mid-March. The highlight of both these phones is the new AI-driven assistant called Sense Companion. HTC says that the companion will be able to learn user’s behavior and over time and deliver prioritised notifications.  The two devices also come with USonic technology which analyses the user’s inner ear via a sonar-like pulse, and adapts the audio to it. The HTC U Ultra runs on Android Nougat, while the U Play comes with Android Marshmallow.

The HTC U Ultra features a glass and metal build, and sports a large 5.7-inch Super LCD 5 display with a QHD resolution of 2560 x 1140 pixels. Further, there is a secondary display on top of the device similar to the one found on the LG V20. HTC calls this Dual Display and is used to show top contacts, notifications, reminders, and more. The U Ultra is powered by a Qualcomm Snapdragon 821 SoC with 4GB of RAM.  At the back of the device is a 12MP UltraPixel camera with a f/1.8 aperture lens and Optical Image Stabilization. At the front is a 16MP camera with an UltraPixel mode that is aimed at taking low-light selfies. It is equipped with a 3000mAh battery and offers 64GB of built-in storage, which can be expanded by up to 2TB. The HTC U Ultra is available in Brilliant Black, Cosmetic Pink and Sapphire Blue colour variants.

The HTC U Play comes with a smaller, 5.2-inch display FHD display, and is powered by a MediaTek Helio P10 processor with 4GB of RAM. The U Play comes with a 16MP cameras on the front and back, but the one on the front comes with an UltraPixel mode, like the one used on the U Ultra. The HTC U Play sports a 2500mAh battery and offers 64GB of storage, that can be expanded by up to 2TB. The device is available in Iceberg White, Indigo Blue, Black Oil and Cosmic Pink colour variants.