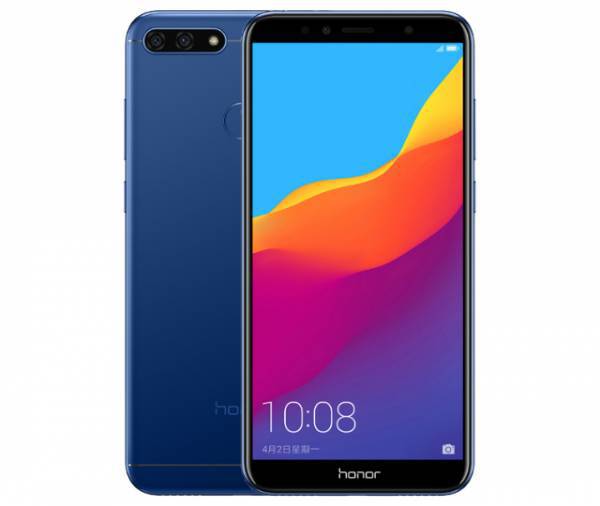 The Honor 7A features a 5.7-inches HD+ display with an 18:9 display aspect ratio and comes with face unlock feature, dual rear cameras and a 3000mAh battery.

Honor has launched its latest smartphone, the Honor 7A in China. The smartphone features a dual rear camera setup and comes with the face unlock feature. It has been launched in two variants, one with 2GB RAM/32GB ROM priced at 799 Yuan (Rs 8,300 approx), and another with 3GB RAM and 32GB of internal storage, which costs 999 Yuan (Rs 10,300 approx). The internal memory of the Honor 7A supports expansion via a microSD card and the device will be available in Black Gold and Blue colour options in China.

Coming to the specifications, the Honor 7A is powered by the Qualcomm Snapdragon 430 octa-core processor clocked at 1.5GHz with Adreno 505 GPU. It features a 5.7-inches TFT LCD HD+ screen with a resolution of 720 x 1440 pixels and runs on EMUI 8.0, based on Android 8.0 Oreo. It is powered by a 3000 mAh battery and comes with a fingerprint sensor at the back. In the camera department, the device features a 13MP + 2MP dual-rear camera setup with an LED Flash.  On the front, it is equipped with an 8MP camera with f/2.0 aperture and it also comes with a dedicated LED flash.

It is not known whether Honor will release this product globally or if it will come to India. However, Honor’s parent company, Huawei recently launched its latest flagship smartphone, the P20 Pro, along with the P20. The handsets have been announced globally and are expected to be made available in India soon as the company has teased the P20 Pro on its official India website.

The Huawei P20 Pro is the company’s answer to the Apple iPhone X. It features a triple main camera system with a 40MP RGB 1/1.7-inch sensor, a 20 MP monochrome sensor and an 8MP telephoto sensor capable of 3x optical zoom. The rear camera also supports up to 10x digital zoom, 5x lossless hybrid zoom, a Leica colour temperature sensor, a laser-based autofocus, and a high ISO range of up to 102400, which the company said is at par with the Canon 5D Mark IV. The standard Huawei P20 comes with a dual 12MP + 20MP rear camera setup where the former is equipped with a 1/2.3-inch RGB sensor with a f/1.8 aperture, and the latter is an RGB sensor with a f/1.6 aperture lens. On the front, both the smartphones come with a 24.8MP camera.

The Huawei P20 Pro and the P20 are powered by the Kirin 970 SoC, which comes with a Neural Processing Unit (NPU) onboard for processing AI related tasks. The phones are running EMUI 8.1 based on Android 8.1 Oreo. The Huawei P20 Pro features a 6.1-inch full-HD+ OLED FullView display, whereas the P20 sports a 5.8-inch full-HD+ RGBW screen. The two devices come with a notch on the top of their display. The P20 and P20 Pro are equipped with 4GB and 6GB RAM respectively and both come with 128GB of internal storage. Despite the taller display aspect ratio of 19:9, Huawei has managed to accommodate a home button at the front of both the smartphones. It also supports an 'edgeless fingerprint' feature, which can recognise gestures like a swiping left or right for multi-tasking, short tap for back and long tap for home.

There is no word on the price at which the smartphones might be available in India, however, in Europe, the Huawei P20 costs EUR 649 (Rs 52,200 approx), whereas the P20 Pro costs EUR 899 (Rs 72,300 approx). The devices are speculated be priced the same or slightly lower in India.