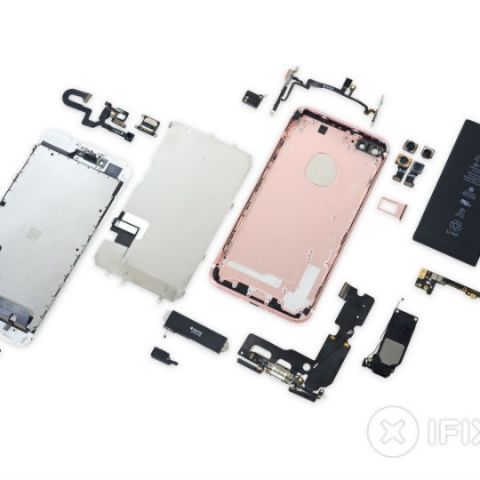 The guys over at iFixit have given Apple’s new flagship smartphone, the iPhone 7 Plus, the teardown treatment. The teardown has revealed some interesting facts about the phone such as the amount of RAM, battery capacity, and more. The device got a repairability score of seven out of a possible 10. iFixit notes that that accessing the battery is pretty straightforward and while removing it requires specialty screwdrivers and knowledge of adhesive removal technique, it isn’t difficult. Further, the new non-mechanical home button should improve reliability. The improved water resistance reduces the need for repairs associated with environmental damage, but makes some repairs more difficult. Screen repairs are easier, but the water proofing measures make it more difficult. iFixit also notes that the addition of tri-point screws, most iPhone 7 Plus repairs will require up to four different types of drivers.

One of the first things noted during iFixit’s teardown was that the adhesive strip sealing the iPhone 7 is much stronger than the one used on the iPhone 6s Plus. It possible that new adhesive is a part of the phone’s water resistance. In the space behind the sport where the 3.5mm jack used to be is the Taptic Engine. This is used to simulate the feedback on the new home button. As for the battery, the teardown reveals that the iPhone 7 Plus has a 2900mAh battery, which is a slight improvement over the 2750mAh battery used in the iPhone 6s Plus.

The iPhone 7 Plus is the first smartphone by Apple to feature a dual-rear camera setup. The teardown reveals that the two 12MP sensors come with separate sensors. The wide-angle lens has Optical Image Stabilisation (OIS), while the seconds telephoto lens doesn’t. Delving deeper into the phone reveals the new quad-core A10 Fusion chip and a 3GB LPDDR4 RAM by Samsung. Further, the new fixed home button is removeable. iFixit also notes that a non-mechanical home button should improve reliability.