Android 10 could release on September 3, Google's Pixels to get first dibs

Android 10 could officially be released on September 10.

It will be made available on Google's Pixels first on September 3.

2016 Google Pixel will also get updated to Android 10.

Last week Google rebranded Android, and for the first time since its original release ten years ago Android will now be shipping without a dessert name. The latest Android version will be called Android 10. The move signified that the launch of the stable version is just around the corner. Now, Phonearena reports that it will be released on September 3, 2019, which is just one week from now.

Android 10 could debut on September 3, and it could be released for the Pixel phones first, as expected. Thanks to Google support, we are now aware of the official release date of Android 10. The date was confirmed by separate chats with Google customer support reps. In both cases, the Google customer support responded to the question of when Android 10 would be made available with the exact same date: on September 3. In one of the cases, the messages were exchanged with a Pixel 3a user. Below is a screenshot of the conversation: 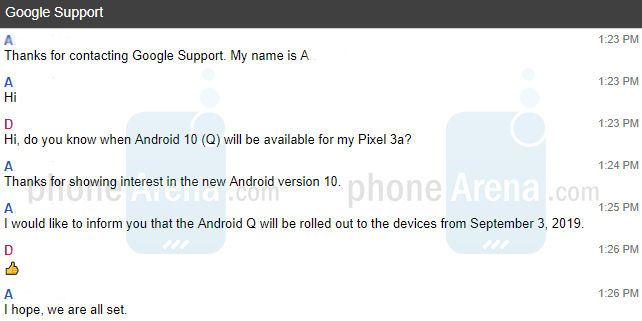 Android 10 is first expected to roll out to the Pixel smartphones - all of them,  from the original to the Pixel 3a series. While the Android 10 update is out of the standard two-year support window for the original Pixel, it will still be getting the update.

Some of the major changes that Android 10 will be bringing are native support for foldable phones, Smart Reply, 5G, Live Captions, Suggested Actions, as well as improved security and privacy features. Other notable features include improvements in digital well-being and parental controls functionalities, and seamless background updates. Additionally, a system-wide dark mode is also incoming.

While Android manufacturers take some time to prepare the major Android software updates for their devices, Nokia has already released a roadmap for smartphones that will be receiving the Android 10 update. You can check if your Nokia device will be getting Android 10 update here.