Apart from the 14-inch workstation ultrabook, HP also announced an expansion to its Z portfolio of professional workstation and display products. Some of them sport Intelâ€™s Thunderbolt port. 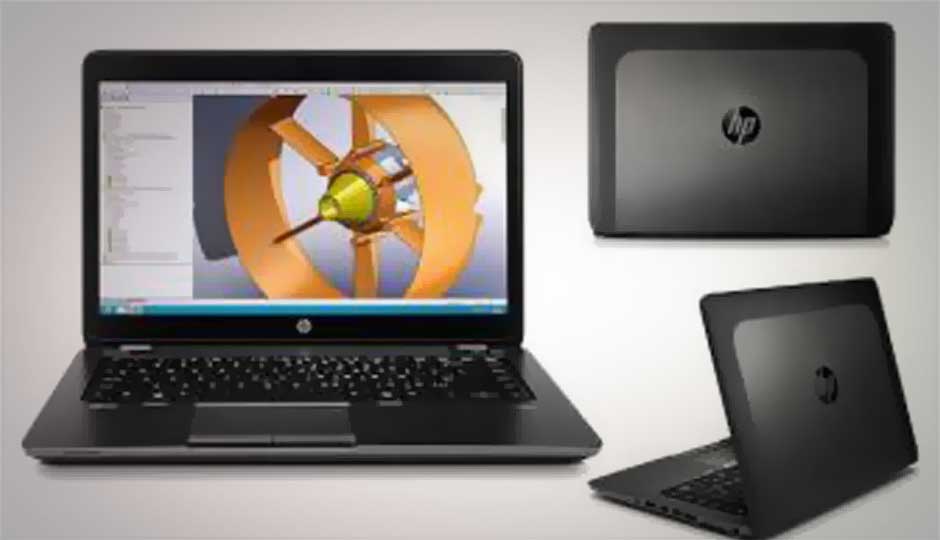 Workstations are performance behemoths of the PC industry. Their performance punches knock out off-the-shelf consumer desktops with ease, humiliate the fastest consumer laptops with a yawn, and they melt smartphones and tablets like cheese on their high-powered, performance-rich diet. Workstations are in a different league altogether – and HP just launched some new ones in India yesterday.

Of these, the HP ZBook 14 is hailed by the company to be the “world’s first” workstation ultrabook, sporting a slim 14-inch profile and an optional multi-touch enabled display. Scroll down further to read more about it and check out its detailed images.

Before we dive into HP’s workstations, a short summary of the category. According to IDC, HP’s the market leader in the workstations segment – both in India and across the world. Anneliese Olson, Vice President, Personal Systems Category, HP Asia Pacific and Japan, mentioned at the launch event that the market for workstations “grew by 7 per cent”. And there’s plenty of growth potential in the Indian market – since workstations are ideal for professionals in engineering, CAD, architecture, design, animation, film, education, government and healthcare – hence HP’s flurry of brand new workstations for Indian customers.

The HP ZBook 14 also comes with the option for a touch-enabled panel, making it a great choice for anyone who likes a hands-on experience. The HP ZBook 15 will include an option for a super-high-resolution QHD 3,200 x 1,800 display. The HP ZBook 15 and 17 feature a Thunderbolt port, as well as an optional DreamColor Display panel that provides accurate and consistent color from the display to print and the big screen.

Take a look at the HP ZBook 14 workstation ultrabook below:

All the existing HP Z desktop workstations – the HP Z420, Z620 and Z820 – have been updated to include the latest Intel Xeon E5-1600v2 and E5-2600v2 families of processors as well as new memory running 16 percent faster and 2nd generation Thunderbolt ports, according to the company’s report. The addition of Thunderbolt will accelerate creative projects with data transfer speeds four times faster than the bandwidth of USB 3.0, easily connecting multiple devices with just one single, compact Thunderbolt port.

Apart from tool-free serviceability, the dual-socket HP Z820 Workstation offers up to 24 processing cores, up to 512 GB of ECC memory, up to 15 TB of high-speed storage, and up to two NVIDIA K6000 graphics.

The HP Z620 Workstation packs computing and visualization power into a quiet, compact footprint. The HP Z620 is the company’s most versatile workstation, providing up to 24 discrete processing cores, up to 192 GB of ECC memory, up to 12 TB of high-speed storage, and up to NVIDIA K6000 or dual NVIDIA K5000 graphics for high-speed graphics performance.

Adding to the company’s line of professional displays, the new HP Z27i and Z30i IPS displays are aimed at designers, content creators and knowledge workers across the enterprise who require image accuracy, adjustability and reliability.

Both the HP Z27i and Z30i new displays claim to provide 100 per cent coverage of the Adobe sRGB color space—the standard color space for the web, and for the majority of engineering, creative and professional applications—commonly used in photography and digital press workflows. These displays also have IPS gen 2 panels with 178 degree viewing angle and up to 37 per cent greater power savings compared to HP’s first-gen IPS display tech, the company claimed. To free up valuable desk space, an HP Thin Client Mount Kit also is available for both the HP Z27i and Z30i, allowing users to securely mount an HP Thin Client or Ultra Slim desktop to the back of the display. 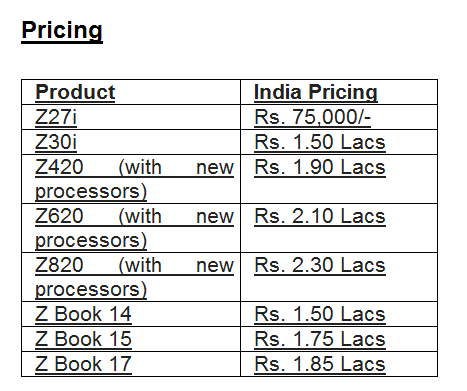