WWDC 2016: Here’s how to watch the keynote live 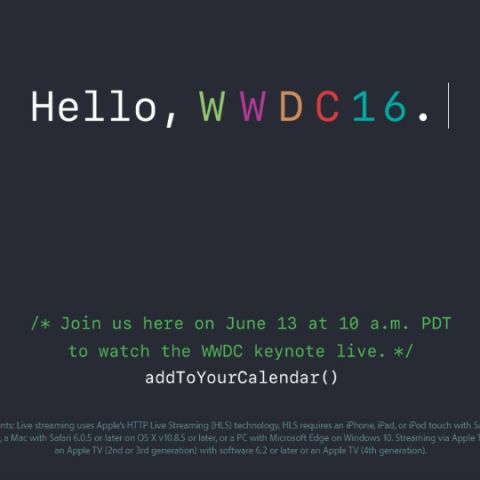 Apple’s Worldwide Developers Conference (WWDC) will kick off today at 10:00 am PDT (10:30 pm IST). The keynote from the event will be streamed live and Apple has offered people a number of different ways to view it. The most simple method watching the stream is via this link here. However, since the stream uses Apple’s HTTP Live Streaming (HLS) technology, there are some minimum requirements. Those using an iPhone, iPad, or iPod Touch with Safari need to ensure that they are running iOS 7 or later, while Mac users require Safari 6.0.5 running on OS X v10.8.5 or later. Apple TV users with 2nd, 3rd or 4th generation devices can view the event via the dedicated Apple Events app. However, Apple users aren’t the only ones to get to watch the event. Like the launch event for the iPhone 6s, Windows users can also enjoy the keynote as long as they have a PC running Windows 10 with Microsoft’s Edge browser.

While Apple has not yet confirmed anything, there are a number of announcements being speculated. The company is expected to unveil iOS 10 alongside OS X 10.12. Apple may also unveil a new WatchOS and tvOS for the Apple Watch and Apple TV. It is also expected to revamp iTunes and Apple Music. Apple is also speculated to release a new Siri SDK that is tipped to give the virtual assistant additional features.