This material is so water-repellent that water bounces off it 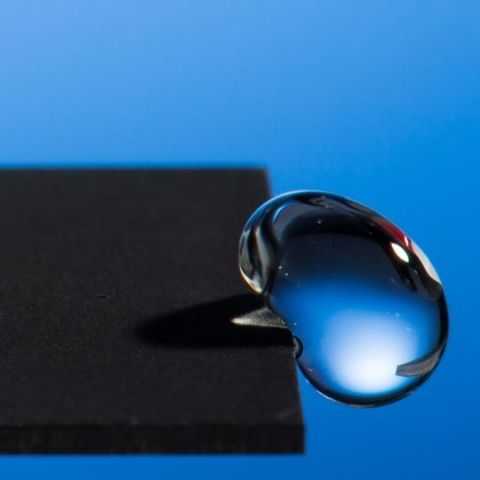 Researchers at the University of Rochester have developed a new laser-etching technology that creates a super hydrophobic sheet of material. The material is so hydrophobic that water drops bounce off until they fall off the edge.

The unique thing about the new technology is that it's much more slippery than Teflon, used common hydrophobic material that often coats nonstick frying pans. It's notable unlike non stick frying pan new  laser-treated metals doesn't require to tilt the metal for water to roll off the surface. Since frying pans use chemical coating which wears off over the time. The new technology can be used in a number of applications such as rust prevention, anti-icing, or even in sanitation uses.

As the water bounces off the surface, it also collects dust particles. Researchers also tested this using ordinary dust from a vacuum cleaner and dumped it onto the treated surface. About half of the dust particles were removed with just three drops of water. It took only a dozen drops to leave the surface spotless. Also it remained completely dry.

“The material is so strongly water-repellent, the water actually gets bounced off. Then it lands on the surface again, gets bounced off again, and then it will just roll off from the surface,” said Guo, professor of optics in the University’s Hajim School of Engineering and Applied Sciences. That whole process takes less than a second.

“In these regions, collecting rain water is vital and using super-hydrophobic materials could increase the efficiency without the need to use large funnels with high-pitched angles to prevent water from sticking to the surface,” says Guo. “A second application could be creating latrines that are cleaner and healthier to use.”

Check out the video below to learn more about the new water repelling metals.