StoreDot claims to charge your smartphone battery in 30 seconds

StoreDot's prototype bio-organic technology can charge your smartphone in 30 seconds or less. 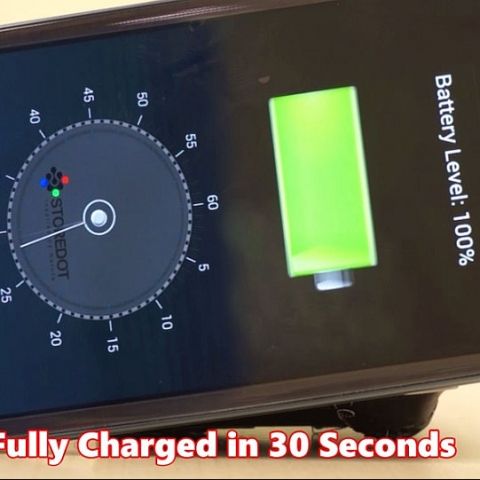 An Israel based startup, StoreDot claims to have developed a new battery-technology that claims to charge your smartphone's battery in 30 seconds. The startup unveiled its battery prototype at Microsoft's 'Think Next Conference' in Tel Aviv. The company has developed a charger and a battery. This special charger can charge an empty Samsung Galaxy S4 battery within 30 seconds! The demo with an S4 battery was given by the startup at the conference.

StoreDot's charger produces chemically synthesized bio-organic peptide molecules called 'nanodots', that improves the electrode capacitance and performance, which results in batteries that can be fully charged within seconds instead of hours. The technology is cost effective and is inspired by natural processes.

'In essence, we have developed a new generation of electrodes with new materials – we call it MFE – Multi Function Electrode," StoreDot CEO and founder Doron Myersdorf stated. "On one side it acts like a super capacitor (with very fast charging), and on the other is like a lithium electrode (with slow discharge). The electrolyte is modified with our nanodots in order to make the multifunction electrode more effective."

Currently the battery which is the size of a laptop charger, is not ready for the market. According to Myersdorf, it will take a year for the company to make a functional prototype embedded inside mobile devices. The company expects to have the charger ready for production by 2016. The estimated cost of the charger is twice as that of an average charger which is up to $30.

"So we are talking about three years for a commercial ready device," Myersdorf added. "So I assume it will be three years before you can actually purchase it in the market."