Follow Us
HIGHLIGHTS
Specs comparison: Honor 7C vs Honor 7A

The Honor 7C and the Honor 7A are two budget devices by the company that comes under Rs 10,000 in India. Both the device comes with a dual camera setup and an HD+ display. In the budget segment (under Rs 10,000) you don’t have a wide range of options to choose from still there are plenty of devices available in the market among which these two are also pretty good when it comes to the specifications they have to offer. Let’s compare the two to see what these two got under its hood in terms of hardware? 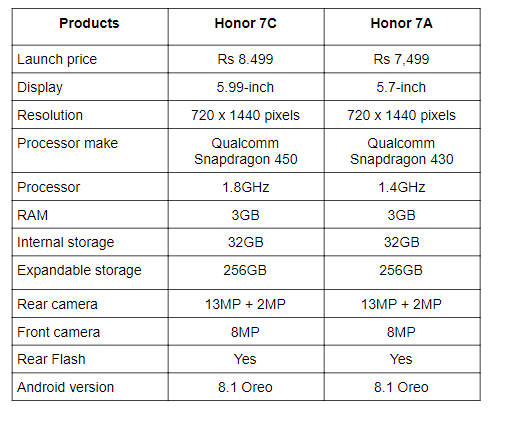 As far as the cameras are concerned, both the device has a dual 13MP + 2MP camera set up at the back along with an 8MP unit on the front.

Overall, there is not much of a difference between the two but there are some noticeable upgrades in Honor 7C in compared to the Honor 7A, which can be taken into consideration. The Honor 7C available in India for Rs 8,499, while you can get the Honor 7A for Rs 7,499.