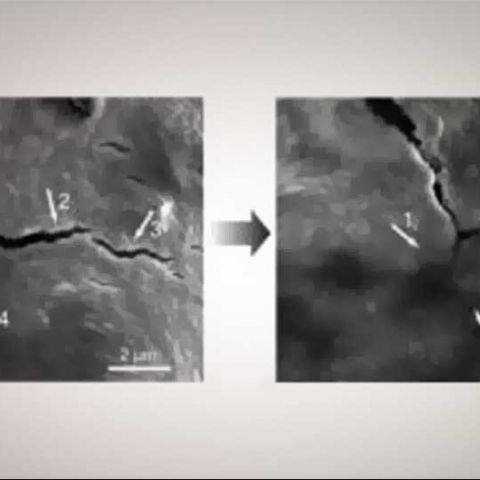 A team of scientists from Stanford and SLAC have made the first battery electrode that heals itself. The battery will opening a potentially commercially viable path for making the next generation of lithium ion batteries for electric cars, smartphones and other devices.

Chao Wang a postdoctoral researcher at Stanford developed the self-healing polymer in the lab of Zhenan Bao, a chemical engineering professor at Stanford. Chao added tiny Nan particles of carbon to the polymer so it would conduct electricity for the battery project. The self-healing electrode, which is made from silicon micro particles that are widely used in the semiconductor and solar cell industry.

Researchers added a stretchy polymer to coats the electrode and bind it together. The polymer instinctively heals miniature cracks that build up during battery operation and helps in increasing battery life.

The researchers have tested the electrodes by putting them through 100 charge-discharge cycles without facing any issues. However, they added that needed to achieve 500 cycles for smartphones and 3,000 cycles for electric vehicles, before confirming the results.

Chao Wang, one of two principal authors of the paper stated, "Self-healing is very important for the survival and long lifetimes of animals and plants. We want to incorporate this feature into lithium ion batteries so they will have a long lifetime as well."

"We found that silicon electrodes lasted 10 times longer when coated with the self-healing polymer, which repaired any cracks within just a few hours," Bao said.

"Their capacity for storing energy is in the practical range now, but we would certainly like to push that," said Yi Cui, an associate professor at SLAC and Stanford who led the research with Bao. He added that the electrodes worked for about 100 charge-discharge cycles without significantly losing their energy storage capacity.