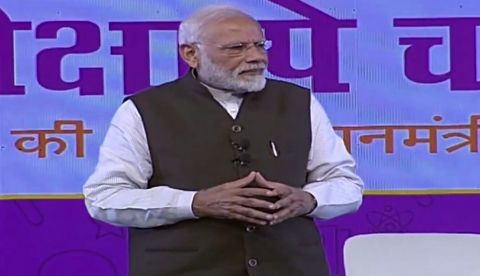 PUBG Mobile has grown by leaps and bounds since it was launched as it now has over 30 million daily active players. It also won Best Mobile Game Award at 2018 Golden Joystick Awards, along with Google Play’s best game of the year award. However, for all the adulation it has received, the battle-royale multiplayer title is also being looked at as a source of addiction for children and adults, in some cases. The game seems to have become so well known that even Narendra Modi, the Prime Minister of India, knows about how addictive it is.

In a recent interaction with parents and students at an event called “Pariksha pe Charcha 2.0” (Discussions on Exams 2.0), PM Modi answered some questions pertaining to the upcoming exams. The mother of a student said that her son in class IX is inclined towards online gaming, so much so that it is affecting his studies. She asked the PM for a solution for this to which Modi replied,  “Ye PUBG wala hai kya?” (Is he one of the PUBG players?). As far as we know, there are no major politicians that are up to speed on how much impact PUBG Mobile has made on people across the country, but it seems like PM Modi knows what’s happening. As soon as he said the words, the crowd at the event burst out into applause.

However, the PM is not up to speed on the other famous battle royale title as he also said, “Ya to frontline wala hoga” (Or he might be playing frontline). We think he meant Fortnite and not frontline. Modi goes on to say that technology is a problem, yet also the solution and that taking away kids from technology is regressive. Students should be guided on what to use technology for and parents need to discuss with their children on what's happening in the world of tech.

PUBG Mobile is indeed a hot topic, even more so since it was reported of being banned from primary schools in Gujarat. The Gujarat government’s primary education department issued a circular asking district authorities to implement a ban on PUBG. The circular is said to have been issued after Gujarat State Commission for Protection of Child Rights made a recommendation to do so as children were supposedly getting addicted to the game and it was “adversely affecting their studies”. Jagruti Pandya, the chairperson of the Gujarat child rights body, said that the National Commission for Protection of Child Rights (NCPCR) has recommended a ban on the game across the country.

Previously, Jammu and Kashmir Students Association asked the state’s governor to ban PUBG Mobile for the same reason. It was said to be too addictive and the reason for poor results of students in Class X and XII exams.