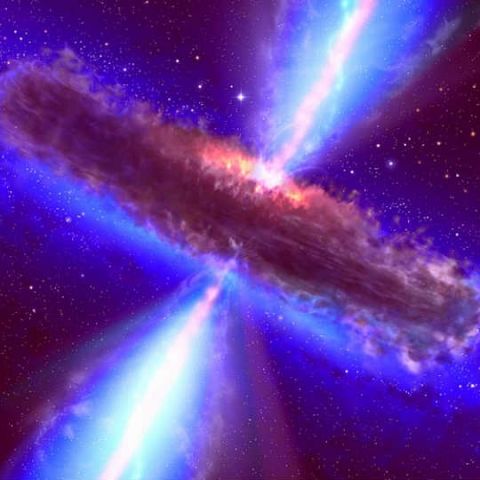 Astronomers working at the National Center for Radio Astrophysics (NCRA) have discovered a giant radio galaxy that is dying. The galaxy was discovered using the Giant Meterwave Radio Telescope (GMRT) located in Kohad,located in the Pune district. It is located in the constellation Cetus and is about nine billion light-years away. The newly discovered galaxy has been given the scientific name ‘J021659-044920’ and emits powerful radio waves. The galaxy has an end-to-end extent of 4 million light-years. Radio galaxies measuring less than a million light years are common, but those of this size are extremely rare. The fact that the galaxy is in the process of dying has made this an extremely rare find.

A radio galaxy is a galaxy that produces radiation that falls in the radio-frequency range of the electromagnetic spectrum. It is argued that the reason for such radiation is the presence of a supermassive black hole at the center of the galaxy. This black hole drives massive jets of hot plasma in diametrically opposite directions which eventually give rise to radio lobes. Under some rare circumstances, the black hole at the center may stop producing the jet. When this happens, the radio lobes fade away due to lack of replenishment, followed by the loss of energy. This loss is caused by the emission of radio waves and the transfer of energy to photons from the cosmic microwave background. The image of J021659-044920 shows that the jet has stopped and the radio lobes are starting to fade away. 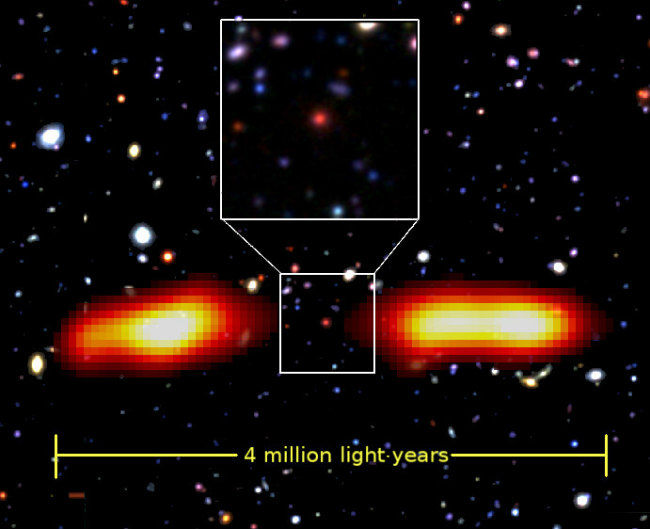 Low frequency radio telescopes like the GMRT are used to study dying radio objects. The GMRT is the world’s largest radio telescope operating at low frequencies. it is an array of 30 fully steerable, 45-meter diameter antennae that are spread over a 30 kilometer region around Khodad. It is built and operated by the NCRA of the Tata Institute of Fundamental Research since 2002. For their analysis, the team combined the observations of the GMRT with previous observations made using international ground and space based telescope facilities. Using data from multiple telescopes that span the electromagnetic spectrum, researchers were able to carry out a comprehensive analysis of the physical conditions around the galaxy.