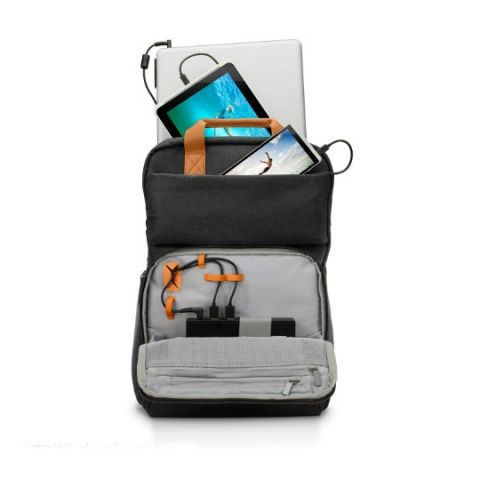 Called the HP Powerup Backpack, the bag is priced at $199 and sports a 22400mAh battery.

Most of us now carry around a power bank with us to charge our phones when they get low on battery, but what if your laptop is low on charge? It seems like the folks at HP have decided to tackle the issue by launching a backpack that can charge a laptop. Called the HP Powerup Backpack, it comes with a huge 22400mAh battery and is priced at $199 (approx. Rs. 13,300) on Amazon. HP says that the backpack can charge most HP laptops, as well as tablets and smartphones. Further, it also features power priority, which allows the user to choose which device charges first. The HP Powerup Backpack also comes with a built-in heat sensor that monitors temperature and ensures that the bag does not get too hot. The bag is capable of charging a laptop as well as two devices via microUSB cables.

The backpack itself is made from canvas with an interior padding. Further, it comes with its own raincoat that can be used to cover the bag in case it starts to rain. The HP Powerup Backpack is scheduled to be available from October 1.

HP is also working on a backpack that will do much more than just charge your laptop. Back in May, the company showcased a concept backpack that was a complete PC and was aimed at offering an untethered VR experience. Called the Omen X, the device weighs about 4.5kg and will be powered by Intel Core i5 or i7 processors. It will also sport two hot-swappable batteries.