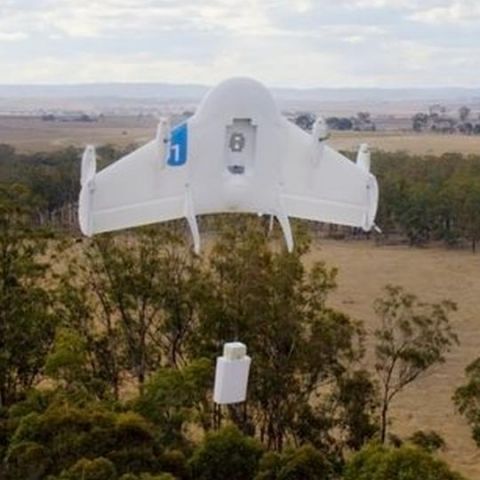 Google X, the internet giants tech search team has been working on Project Wing, a drone-based delivery system for the last two years. The internet giant plans to use drones to deliver goods to buyers similar to Amazon but the projects main aim is to help people stuck in disaster areas.

Google has dozens of people working on the project and aims to deliver good to people quickly via these small, "self-flying vehicles." Google X's Astro Teller states, "Even just a few of these, being able to shuttle nearly continuously could service a very large number of people in an emergency situation. "

Google's drones consists of four electrically-driven propellers with a wingspan of about five feet; it weighs just under 19 pounds and can take off and land without a runway. BBC reports that the entire weight of the craft and the item it is delivering can be only up to 22 pounds. The drones power is near the front of the plane and its computer is near the tail section. It supports GPS, cameras, radios, and an inertial measurement sensor to help the craft determine how it's positioned.

Google's Project Wing completed its first delivery of a bundle of Cherry Ripe chocolate bars on Aug. 13, "We selected these items based on several conversations with local people about how aerial delivery might help them in their jobs," GoogleX said in a release Thursday. "Over the course of the week, the team ran more than 30 successful delivery flights. We are now back in California reviewing what we've learned."

Google says that the drone will be controlled by computers as well as people. The internet giant adds that it plans to use human interactions to improve the automated software, similar to its self-driving car program. Although Google is bullish on the projects progress, the company says not to expect drone deliveries for a few years yet. The team is planning to work on improving the precision of its flights and delivery targets and making sure the drones are able to see and avoid each other while in flight over the coming months.

Google's rival Amazon is already said to be working on the drone-based delivery system. According to reports, India will be the launchpad for the new system. Also Read- Amazon may start delivering in India using Drones by Diwali

Do you think drone-based delivery system will be successful? Let us know your views in the comments section below: