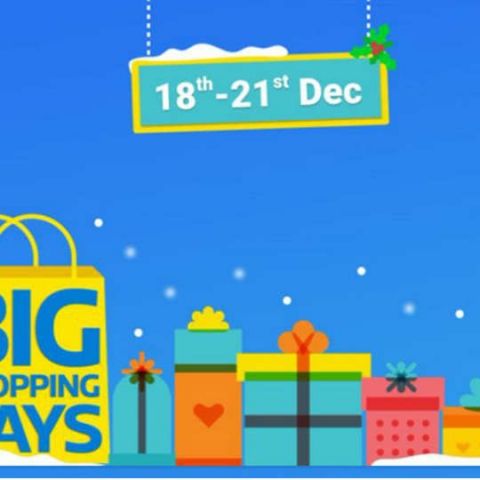 Flipkart's 'Big Shopping Days' Sale has turned into a controversial affair even before the sale started. While Flipkart's shopping extravaganza have been plagued by pricing glitches in the past, this time it got into a controversy over sale of OnePlus 3.

OnePlus 3 is undoubtedly the best smartphone under Rs 30,000 and with Flipkart selling the device at just Rs 18,999, the smartphone turned into an even more compelling option. The availability of OnePlus 3 at just Rs 18,999 has taken even the company co-founder Carl Pei by surprise who tweeted his confusion. While OnePlus 3 priced at Rs 18,999, a discount of Rs 9,000 remains the top highlight of Big Shopping Days Sale, there are other great deals on gadgets and electronics that you should not miss.

1. Apple iPhone 6: You simply can't go wrong with an iPhone. Apple has set a standard for what an ideal smartphone experience should look like with its iconic iPhone and while a brand new iPhone would put a big dent on your wallet, an older model should work fine regardless of its age. Apple has not refreshed the iPhones in terms of design for nearly three years now and Flipkart is selling iPhone 6 - the last redesigned iPhone at Rs 29,990 for the 16GB variant.

Apple iPhone 6 features a 4.7-inch Retina display with a resolution of 1334 x 750 pixels. The smartphone is powered by Apple's A8 processor aided by 1GB RAM and 16GB non-expandable storage. Apple iPhone 6 sports an 8MP primary camera and a 1.2MP secondary camera. It also offers Touch ID for unlocking and authenticating digital payments. However, what sets iPhone apart is its operating system. Apple iPhone 6 runs iOS 9 with upgrade available to iOS 10.

Apple iPhone 6 is two years old but Apple has a proven track record of upgrading its devices for at least three years. Considering that, iPhone 6 is good for upgrades for at least two more years and if you are curious about security, then iOS is second to none in the mobile space. Read our full review here.

2. Canon EOS 1200D with dual lens kit: Sure, smartphones have overshadowed point-and-shoot cameras in the past and are now on the verge of getting better of entry-level DSLRs. Till that becomes reality, Canon EOS 1200D is one of the best entry level DSLR for both amateurs and pro photographers looking for a second cheap glass. With Flipkart's dual lens kit option with 18-55mm kit lens and additional 55-250mm zoom lens, the deal just gets even better.

For uninitiated, Canon EOS 1200D offers an 18MP APS-C CMOS sensor with maximum shutter speed of 1/4000 second and maximum ISO of 3200. The camera offers 9 point autofocus with ability to choose between auto and manual focus.

3. Samsung Galaxy On Nxt: Samsung has made its own space when it comes to budget and mid-range smartphones running Android. While Samsung devices don't offer as much RAM or processing like smartphones from Chinese OEMs do, it certainly delivers on experience and reliability. Flipkart is offering discount of flat Rs 1,590 on Galaxy On Nxt.

The Flipkart-exclusive smartphone comes with 5.5-inch Full HD display and is powered by Exynos 7870 processor. The smartphone comes with 3GB RAM, 32GB storage with expandable storage up to 256GB via dedicated SD card slot. In our review, we noted that Galaxy On Nxt delivers "decent performance for non-demanding users and even has a fairly decent display." If you are looking for a Samsung device under Rs 20,000 then Galaxy On Nxt is worth considering.

Buy Samsung Galaxy On Nxt from Flipkart at Rs 16990.

4. Apple Watch: Whether you own an iPhone or planning to get one, the best wearable in terms of compatibility is Apple Watch. Apple Watch doesn't offer an always-on display or round watch face like its Android counterparts but it makes for it with tighter integration with iOS and trademark Apple build quality and plethora of choices when it comes to straps.

Flipkart is offering Apple Watch Sport with 38mm space grey aluminium case and black sport band for Rs 18,990. The smartwatch generally retails for Rs 25,900 and it makes for a great companion if you live in the Apple World. If sport band doesn't entice you then Flipkart is also offering Apple Watch with Black woven nylon strap at same price. While smartwatches may have lost their sheen, it will certainly appeal to gadget nerds.