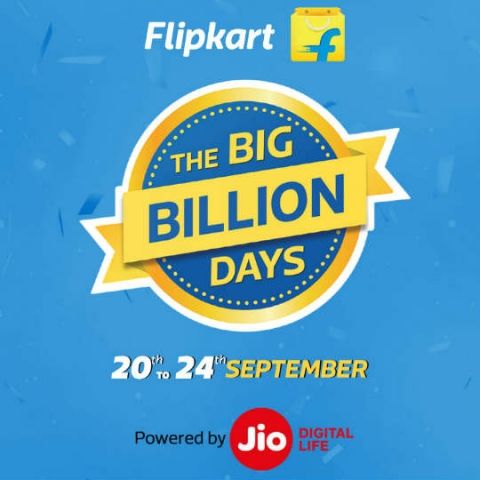 Flipkart's Big Billion Day sale starts tomorrow and the company is targeting consumers looking to purchase new products ahead of the festive season. The sale starts at midnight and first day will see deals on electronics and fashion products. However, the big sale will be held on on September 21 where Flipkart will have exclusive deals on wide range of smartphones.

Ahead of the big sale, the company has confirmed discounts that will be available on some of the products. The final price on some of the mainstream products is still unknown but Samsung Galaxy S7 seems to be one of the top smartphone on sale this year.

Flipkart has discounted Galaxy S7 to Rs 29,990 and is offering extra Rs 3,000 off over regular exchange. With Galaxy S7, Flipkart is also offering assured buyback of up to Rs 15,000 when customer exchanges the device later and one time screen replacement within 1 year from date of activation can be availed at just Rs 990. Flipkart notes that effective price of Galaxy S7 against exchange of Galaxy On Nxt comes down to Rs 20,990.

The Indian e-commerce giant will also have discounts on Huawei's Honor 6X and Honor 8 Pro smartphones. Honor 8 Pro is a premium mid-range flagship with 6GB RAM, dual 12MP camera setup and is priced at Rs 29,999. The Honor 6X, on the other hand, also features dual rear cameras, 4GB RAM, 64GB storage and it generally retails at Rs 13,999.

Flipkart will also hold sales of Xiaomi's entry-level Redmi 4A and Android One-based Mi A1 starting at midnight on September 21. The Redmi 4A will be available in 3GB RAM, 32GB storage variant at Rs 6,999 while Mi A1 is priced at Rs 14,999. The 3GB RAM and 4GB RAM variants of Lenovo K8 Plus will be available at discounted price during the sale. The Lenovo Z2 Plus, with a Qualcomm Snapdragon 820 processor, will be available for Rs 8,999.

Flipkart's Big Billion Days sale will also see the launch of Asus Zenfone 4 Selfie at Rs 9,999 and Panasonic's Eluga Ray 700 and Eluga Ray 500 at Rs 9,999 and Rs 8,999 respectively. As far as premium devices go, Flipkart is promising special discounts on Apple's iPhone lineup and solar red variant of HTC U11. Flipkart has also partnered Bajaj Finserv to offer no cost EMI on all mobiles. It must be noted that Amazon is hosting its own Great Indian Festival from September 21 to September 24.