In its crusade against fake accounts and misinformation, and to enforce Community Standards on the platform, Facebook, in a new report, has revealed that it disabled a record 1.2 billion fake accounts in the fourth quarter of 2018 and 2.19 billion in the first quarter of 2019. In the third Community Standards Enforcement Report, the company also added information which includes data on appeals, content restored, and regulated goods (such as drugs and guns).

Firstly, the company said that it is now including metrics across nine policies within its Community Standards, which are: adult nudity and sexual activity, bullying and harassment, child nudity and sexual exploitation of children, fake accounts, hate speech, regulated goods, spam, global terrorist propaganda, and violent and graphic content.

As mentioned above, Facebook also included data on the actions it took in case it found a fake account or any questionable content. For fake accounts, the company said that the amount of accounts it took action on increased due to automated attacks by bad actors who attempt to create large volumes of accounts at one time. In the case of questionable content, the company claims that it detected over 95 percent of the content it took action on before someone else reported it. The content was audited under six policy areas.

“For hate speech, we now detect 65 percent of the content we remove, up from 24 percent just over a year ago when we first shared our efforts. In the first quarter of 2019, we took down 4 million hate speech posts and we continue to invest in technology to expand our abilities to detect this content across different languages and regions,” Facebook said. 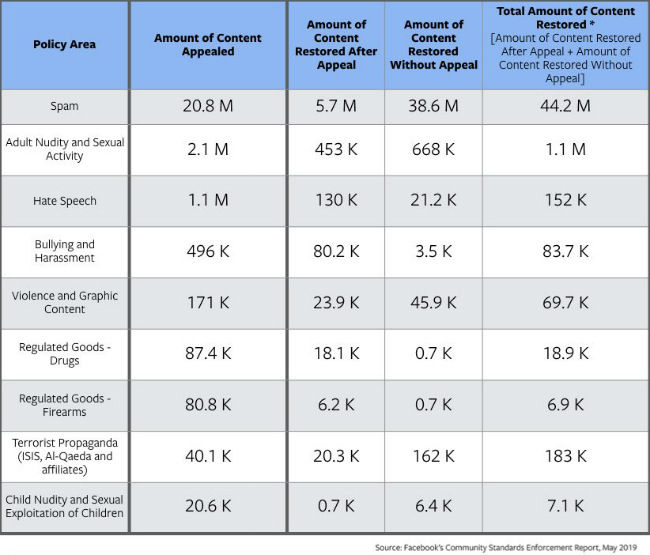 Additionally, company CEO Mark Zuckerberg denied calls to break up Facebook, arguing that it is because of the size of the company that it was able to defend against the network's problems. “I don't think that the remedy of breaking up the company is going to address [the problem]. The success of the company has allowed us to fund these efforts at a massive level. I think the amount of our budget that goes toward our safety systems... I believe is greater than Twitter's whole revenue this year,” BBC quoted Zuckerberg as saying after a call with the media.