Users can now pair the already available AR stickers with photos and videos. Earlier, users could only sent them through standard text chats. 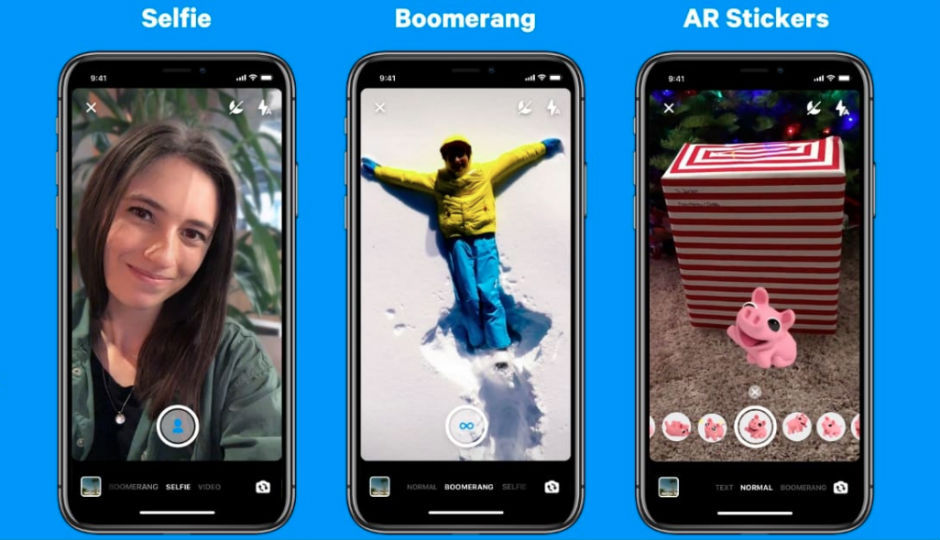 Facebook has announced the addition of two new modes in the Messenger app's camera and updated the use of AR stickers enabling users to club them with photos and videos as an augmented reality object. Selfie mode and Boomerang videos are the two modes being added to the app's camera. These modes are already available in Facebook-owned Instagram app and users will now get to use them within Facebook Messenger.

“Starting today, there are now five modes to Messenger’s camera including everyone’s favorite video-looping effect, Boomerang, to make Messenger posts more interactive and fun. We’ve also added Selfie mode, where you can capture portraits of yourself or friends in Messenger’s camera. Now when you take a photo or video of yourself, you’ll remain in focus with a little extra glow while the background blurs,” the company says in a blogpost.

Facebook states that it is making navigation of Messenger’s existing camera modes — Normal, Video and Text, easier. In Text mode, users can now use new fonts and coloured backgrounds and there are also new holiday-themed features like stickers, masks and filters. Facebook says that every day, more than 20 million people use camera effects for photo and video posts and over 440 million stickers are sent in Messenger chats.

The announcement comes a month after the well-known tipster Jane Manchun Wong tweeted about Facebook Messenger testing Selfie Mode. She claimed that the feature works similar to the portrait modes we see in smartphone camera apps, including skin softening and Bokeh. In October, Messenger announced several changes in the app for easy navigation, personalised conversations, and more.

Facebook Messenger is testing Selfie Mode. It works like the portrait modes we see in smartphone camera apps, including: