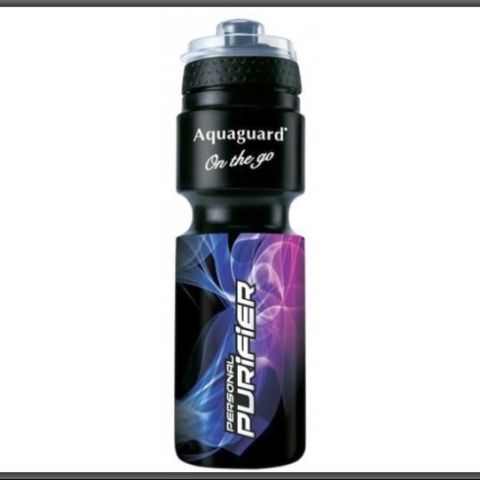 The water purifier is called 'Aquaguard-on-the-Go'.

Eureka Forbes has launched a mobile water purifier called 'Aquaguard-on-the-Go' in India and has priced it at Rs.595. The water purifier will come in the shape of a 'sipper' featuring water purification technology. The sipper will be available at all the retail outlets and general stores in black, pink, pearl white and racy blue colors. "Aquaguard-on-the-Go is perhaps the only water purifier in India which can enable affordability, adaptability and availability of safe drinking water for Indians. It is an important milestone in the history of brand Aquaguard which will take our market leadership in India to the next level,” CEO - Direct Sales and Senior VP of Eureka Forbes, Marzin R Shroff said. He added that "the miniaturized water purification technology was rolled out after seven years of research."

The purifier can distill water using space nano technology which essentially means that the purifier has more than 100 crore optimally charged active sites that attract and remove 99.9 percent harmful bacteria and virus. Water filled in the purifier passes through a maze of nano-sized positive charged media that traps negatively charged pathogens and other impurities to decontaminate drinking water.

The company says that the water purifier would attract travelers, school/college students, sports and fitness enthusiasts. Eureka Forbes is a joint venture between Shapoorji Pallonji Group's Forbes & Company Ltd, based in Mumbai and Electrolux, which is a Sweden-based company. Forbes & Company Ltd. is the oldest registered company in India and founded by Scottish John Forbes in 1767. Later Forbes family sold the company to Tata Group which later sold it to Shapoorji Pallonji Group. Eureka Forbes started as a small firm to introduce domestic water purifier - the Aquaguard. The company had a turnover of Rs. 1776 crore last year and has a customer base of 15 million in India with presence in over 450 cities and towns across 35 countries globally.