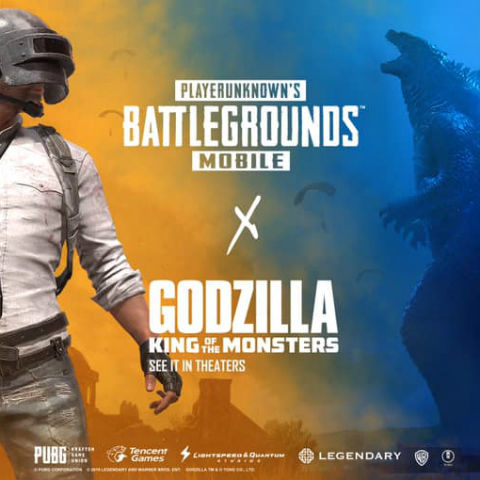 PUBG Mobile teams up with Godzilla: King of the Monsters to announce a new crossover

PUBG Mobile developers keep introducing new features in their game to keep things interesting for players. The zombie mode that the company introduced in collaboration with Resident Evil 2 proved to be a hit as a new related mode was recently rolled out and the title hit over 100,000 monthly active users. Now, Tencent is banking on another famous franchise to re-up the hype for the game. The company has teamed up with Warner Bros. Pictures, Legendary Pictures, and Toho Co.LTD to announce a collaboration between PUBG Mobile and Godzilla: King of the Monsters.

The company is hinting at the arrival of Godzilla in-game, similar to the zombies that arrived after Resident Evil 2 crossover. Players of PUBG Mobile can also expect to see some hints about the fictional monster’s arrival. Several players are reporting that they have spotted graffiti resembling Godzilla and other monsters in the Miramar map. On investigating this graffiti, players would be credited with silver fragments. Some players spotted Godzilla footprints at the military base in Erangel and a silhouette of the monster can be spotted near spawn island. Most of you would have heard a loud scream of the Godzilla when night mode falls on Erangel, with a shadow moving across the map.

PUBG Mobile India tweeted the collaboration announcement saying, “Another collaboration is here! We are thrilled to announce the crossover between PUBG MOBILE and Godzilla: King of the Monsters! Parachute in to find clues of Godzilla's imminent arrival. See Godzilla: King of the Monsters in theaters May 31st!” It will be interesting to see how Tencent will leverage this partnership to bring new content to PUBG Mobile. Maybe a new mode is in the works where players need to slay monsters, which wouldn’t be too different from the event company made available for its players in China during Chinese new year.

A quick look at what makes OPPO F19 so cool! Previous Post
iQOO 7 series to be available via Amazon in India, confirms company Next Post