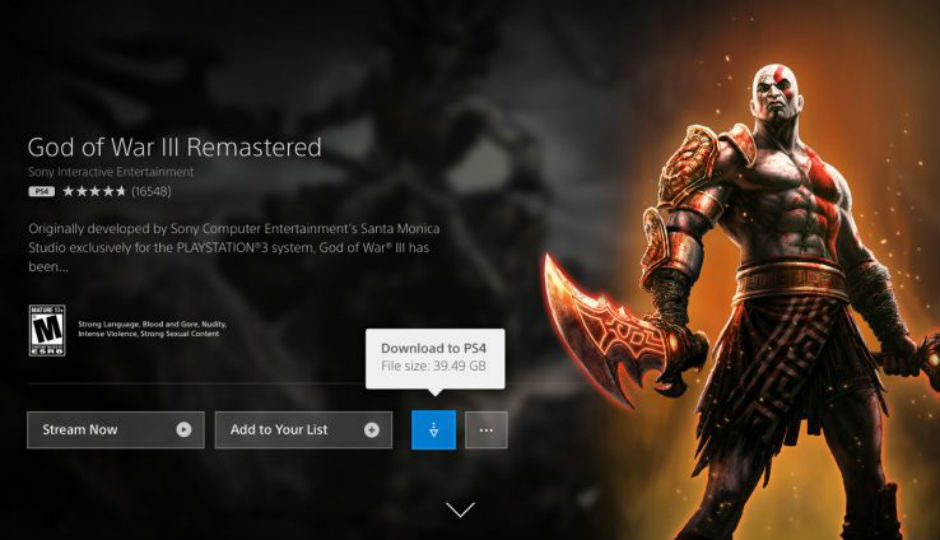 In a blog post Sony has said that PlayStation Now subscribers will be able to download and play PlayStation 2 games on their PS4 console. This will also include enhancements made for the PS4 Pro console if it is applicable for the game. In its blog post, Sony said, “Almost all PS4 games in the service, including Bloodborne, God of War 3 Remastered, NBA 2K16, and Until Dawn, will be available for download, in addition to the PS Now lineup of classic PS2 games remastered for PS4. This feature will be gradually rolled out to PS Now subscribers over the next couple of days, so if you don’t see the feature on your PS Now today, make sure to check back again soon.”

Downloaded PS Now games will support all user-purchased DLCs, microtransactions, and add-ons. PS Now subscribers do not need a PlayStation Plus membership for online multiplayer. This is applicable for both streaming and downloaded games. One thing to remember is that users will need to connect their PS4 systems to the internet every few days to verify their PS Now subscription. This is done even if you only play downloaded games.

For those unaware, PlayStation Now isn’t officially available in India. The game streaming service is not limited to the PlayStation console. The service can be used on TVs, PCs and other devices. You can use the service on your PS4 to play Sony’s classic library of games. It’s a shame though that only PS2 and PS4 games will be downloadable on the system. Sony has a good library of PS3 games and even though you can still stream the games on Sony’s service, it would have been nice to the ability to download them. Maybe because of the architectural differences, it is difficult to download a PS3 game on a PS4 for offline play.

Microsoft is one company that has worked very had hand built a library of backwards compatibility games. You can play a large number of Xbox 360 and first-generation Xbox games on the Xbox One and the Xbox One X. There is no streaming service in play as far as Microsoft’s service is concerned, however, with backwards compatibility, Xbox gamers have access to a great library of games.