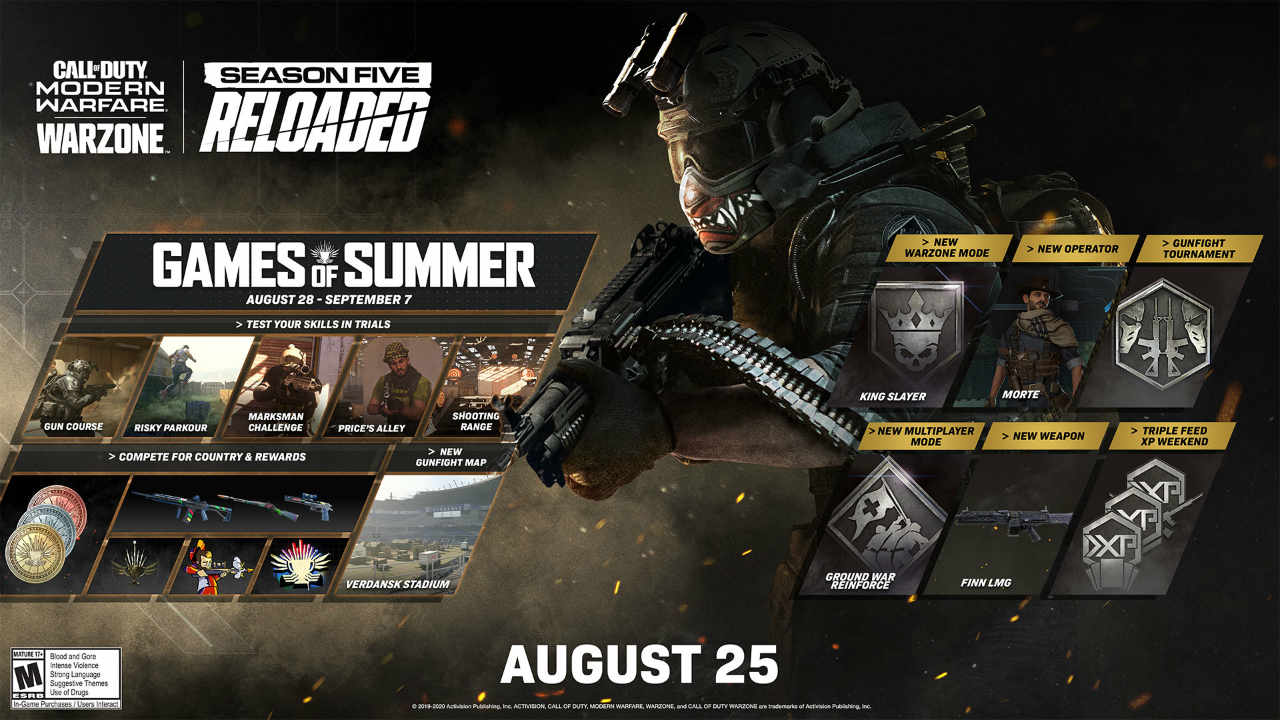 Call of Duty: Warzone is getting a Season 5 Reloaded update today. It comes with exciting new changes including a new weapon, new game modes and a brand new, Olympic like Games of Summer event.

The big one is the Games of Summer event itself. The event which begins on August 28 seems to be Call of Duty’s take on the Olympics and involves players competing in a series of trials and challenges. This single-player event will take place in the Trial mode and includes challenges like Risky Parkour, Gun Course, Marksman Challenge amongst many more. Each trial will be time-based. Based on the players’ performance they will be awarded a medal. Those with gold medals in all 5 challenges will be rewarded with a Legendary Assault Rifle - Juliet Blueprint. Just like the Olympics, each individual medal will be worth points to their country. Throughout the duration of this event, players will see a country leaderboard too. The event is free to play across all platforms and begins on August 28 till September 2. The roadmap of the event is below.

We are also getting a brand new weapon this update. An agile, mobile, and hostile tank of an LMG, the FiNN’s ultra-light and open-bolt design is uniquely paired with advanced recoil controls. This all adds up to a weapon with exceptional full-auto accuracy while still being lightweight, allowing for a unique playstyle that further blurs the line between an assault rifle and LMG.

Stay tuned and turn on notifications to stay in the loop. pic.twitter.com/JzgXdTHcUq

For all multiplayer fans, there is some good news as in the new playlist update Shoot the Ship will be making a comeback. This playlist features the two most frantic, high paced and exciting maps of the game i.e. Shipment and Shoot House across many game modes. This is complemented with a triple feed XP weekend, meaning players will be able to rank up faster with double XP, Battle Pass XP and Weapon XP.

The Gunfight tournament is returning on the free to play weekend. Players will battle it out for rewards like XP, cosmetic items and most importantly, bragging rights as champions. Keeping with the Olympic theme, the pitch of the Stadium from Verdansk is being added as a new Gunfight map.

This update we are getting a new operator called Morte, a spaghetti western-loving gunslinger. Players will be able to access this new operator by purchasing his operator bundle from the store.

Players will also be getting a new Ground War game mode called Ground War Reinforced. Like traditional Domination, players will battle for three flags on the large scale Ground War map but once they are downed they will enter spectator mode, returning only when their teammates capture a new flag. If a team captures all three flags they automatically win the round.

This Season 5 Reloaded update brings a new game mode for Warzone called Kingslayer. This is a large-scale Team Deathmatch on Battle Royale where teams fight to earn points by defeating hostile players. However, the circle doesn’t collapse, rather it moves around the map for an agile battle on the go. The top five team’s top-scoring player will be marked as a ‘king’ on the Tac-Map. Players eliminate kings to get additional points and are awarded a free Killstreak.

We also expect to see some in-game event on August 26 for the reveal of Call of Duty: Black Ops Cold War on August 26. We have already covered its teaser trailer, click here to check it out.