ACT Fibernet says that customers can subscribe to content from existing OTT streaming partners that have tied up with the company, and pay for their subscriptions directly. 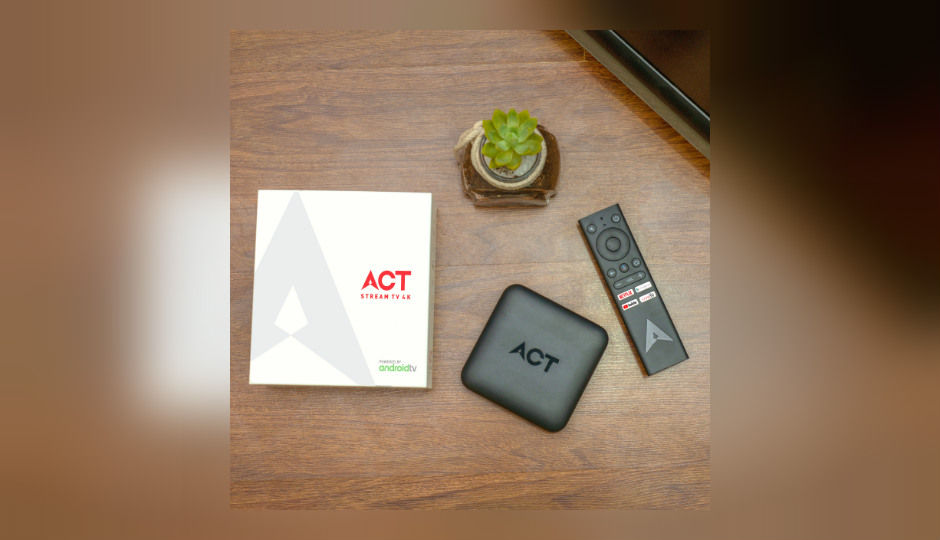 Atria Convergence Technologies Ltd, better known as ACT Fibernet, has launched its first consumer product - an Android-powered hybrid streaming box. Called ‘ACT Stream TV 4K’, the device is part of the fiber-focused broadband provider's new brand strategy towards offering customer centric solutions to enhance user experience. ACT Stream TV 4K will let users stream from their popular OTT platforms like Netflix, Hotstar, Sony Liv, Hooq, Zee5, YouTube, Sun NxT and any othet app available on the Google Play Store, since the device runs on Android 9 Pie. What's unclear at this moment is if the streaming box will launch with Android TV Pie or just Android 9 Pie like any other smartphone. The major difference in the two could be the way the UI is presented. Besides being a hub for OTT streaming, ACT Stream TV 4K users can also access content from TV channels.

The ACT Stream TV 4K ships with Dolby Passthrough and users get access to over 3000 apps available on the Google Play Store. Moreover, customers can also watch over 100 free-to-air TV channels. In case they miss any of their favourite shows, customers can use “Catch up TV” feature to watch TV shows, matches and highlights for upto 24 hours.

What's interesting is that those who buy the ACT Stream TV 4K will be able to subscribe to content from existing OTT streaming partners and channels that have tied up with ACT Fibernet and pay for their subscriptions directly as part of their monthly bill. The device ships with dedicated buttons for Netflix, Google Play Store, YouTube, Live TV and even supports voice search powered by the Google Assistant through a button on the remote. Users can also connect hard disk, joysticks and cameras to the ACT Stream TV 4K box.

In terms of specs, the box is powered by HiSilicon 3798M V200 chipset, along with 2GB RAM and 8GB storage. It supports Dual band (2.4G and 5G) and 802.11 ac Wi-Fi to optimise content. The ports on the box include, two USB ports, an Ethernal port, one HDMI port, one AV output and one SD card slot. In comparison, Airtel now ships the Airtel Internet TV for Rs 3,499. The package includes, Airtel Internet TV box, a 1-month Mega HD channel pack, Free Airtel TV subscription for 12 months (worth Rs 1200), free TV games and one month Netflix trial.

The ACT Stream TV 4K box is priced at Rs 4,499 and will be available with select plans and for purchase post commercial launch in May 2019. You can visit this link to purchase the device when it becomes available. Until then you can express your interest in the device by providing your details. As an introductory offer, ACT Fibernet will provide the ACT StreamTV 4K complimentary to select 5000 customers. Additionally, the company will give customers discounted rates on the Video on Demand (VOD) apps, extended trial periods on content apps, free access to pay-per-view content, download apps from Google Play store, among others.