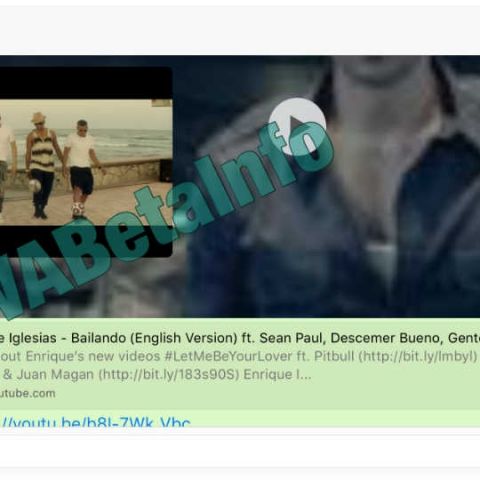 WhatsApp is reportedly testing a new feature that allows users to play YouTube videos from directly within the app's chat window. The feature would eliminate the need to launch the YouTube app for video playback. According to WABetaInfo, the feature enables playback of YouTube videos in a picture-in-picture (PIP) mode instead of opening the dedicated YouTube app. The PIP mode will also allow for functionalities like pinch-to-zoom, full-screen view and option to hide the playback and continue reading the messages. The report also notes that playback will stop as soon as the user switches to some other chat.

The Facebook-owned social messaging service has over 1.2 billion monthly active users globally and over 200 million users in India. The service has been adding a ton of new features to its services starting with voice and video calling support. WhatsApp also gained support for a feature similar to Snapchat Stories and claims that it has over 175 million users.

WhatsApp has also added features like 2-step authentication, the ability to stream videos before downloading, GIF sharing and increased media limit. The service recently started rolling out an option to share any file type, and added an album feature that groups all incoming photos into a folder. Apart from these new features, WhatsApp is also planning to integrate UPI to transfer money. Like most of WhatsApp's beta features in the past, the new YouTube feature is being tested on iOS first and supports reportedly supports iPhone 6 and above right now. The feature is said to first arrive on iOS before rolling out to other platforms.