It will reportedly enable users to set an expiry time for when a message is to be deleted.

Facebook also seems to be testing dark mode for its mobile app.

It seems like Facebook is readying some new features for its Android app, and the popular online messaging platform WhatsApp. As per a new WABetainfo report, WhatsApp developers are now testing self-deleting messages on the platform that was previously called Disappearing Messages. Now renamed simply to Delete Messages, we have already seen a similar feature on Snapchat and Telegram. In a separate report, some on Twitter posted screenshots of the Facebook app with a dark theme. It seems like the social media platform is finally testing dark mode for the Facebook app. However, the test might be happening with a limited batch of users. 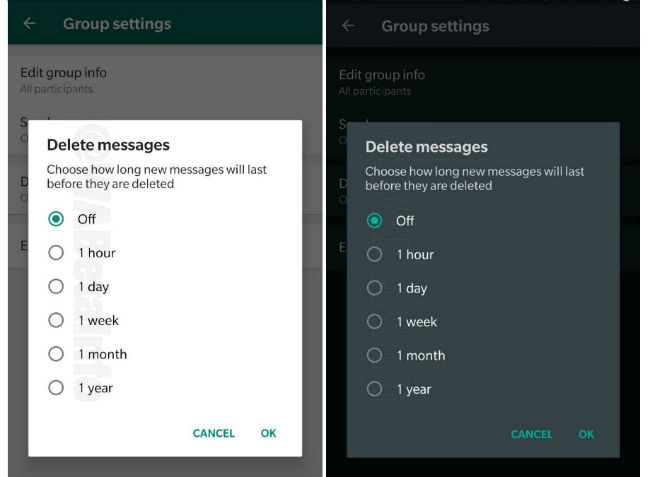 The Delete Messages option is apparently available in Contact Info or Group Settings and can only be enabled by group admins. However, updating to the latest WhatsApp beta version doesn’t enable the option, since it is said to be currently under development. The feature is said to enable users to select how long their sent message will be available before being deleted. Currently, the time periods for the delayed deletion of messages include one hour, one day, one week, one month, and one year. Since the feature is still in testing, it could be changed.

Coming to the dark mode sighting on the Facebook app, Jane Manchun Wong, ṭhe well-known reverse engineer, first spotted the option. Initially reported back in August this year, the dark mode option was said to be in an early stage of development and only certain areas of the app were painted black. The new screenshots posted by some Twitter users suggest that the dark mode development has progressed quite a bit. It remains to be known when the option will be rolled out for standard users.

Speaking of dark mode, WhatsApp is also testing the dark scheme on its app. The option is available for beta users right now and is expected to soon roll out for all users.