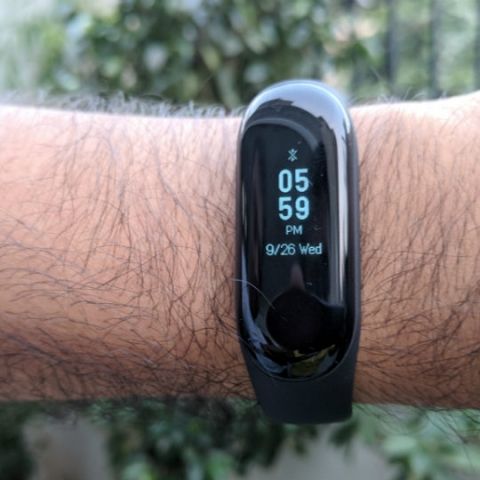 The Xiaomi Mi Band 3 is a pretty impressive little performer for its price range. However, its price point of Rs 1,999 is slightly higher than its predecessors and brings it close to devices like the Lenovo HX03F Spectra.

It could be argued that the first Xiaomi Mi Band kick started the affordable fitness tracker trend in India. The follow up, the Mi Band 2, introduced a display and made it more useable. It was also one of the most affordable fitness trackers you could buy. Now, we have with us the Xiaomi Mi Band 3, which aims to carry forth the legacy of its predecessors. However, the budget fitness tracker market isn’t what it used to be with companies like Lenovo launching a slew of wearables in the category. Let’s see how the Mi Band 3 fares.

The Mi Band 3 shares a lot of similarities with its predecessors. The wearable is small and lightweight. The central module is detachable from the single-piece strap, which is made from silicon. The big difference here is in the central module. While the Mi Band 2 featured a very prominent touch-sensitive button, the button on the Mi Band 3 is more very subtle with a small indentation to let you know where it is. Turn the watch around, and you’ll find the heart rate sensor. 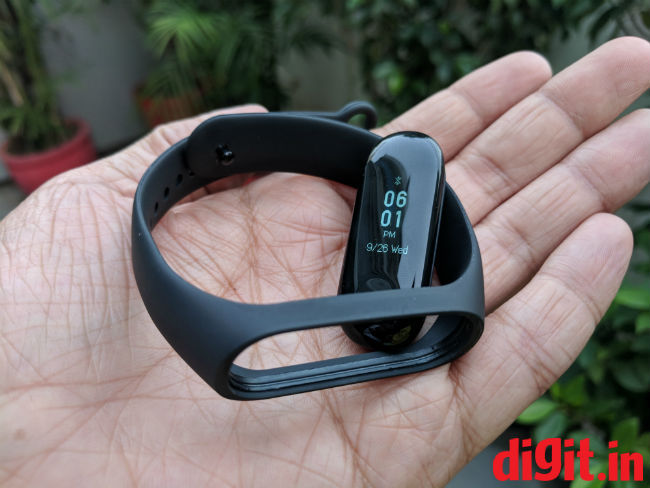 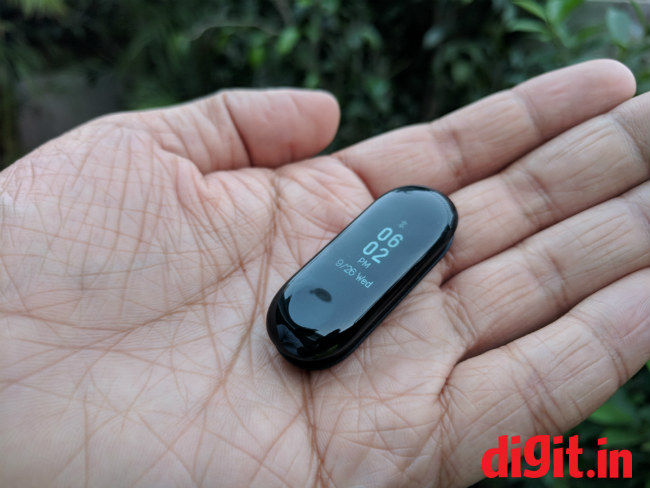 The strap is fastened via a single prong that goes through a loop on the other end of the strap. It’s quite secure and I never felt that it was in any danger of falling off. The Mi Band 3 is also quite light and sleeping with the band on was no problem. I personally quite liked the subtle, bracelet-like looks of device. The Mi Band 3 come with a monochrome OLED display, much like most other devices in this  price range. This time around, the wearable offers a larger display at 0.78-inches. Another nifty little feature is the fact that the you can change the watch face on the device, which is not common among devices in this range. However, you only get three watch faces to choose from.

The display is also pretty bright and I didn’t have much trouble viewing the screen in bright daylight.

The Mi Band 3’s UI takes a little while to get used to. Thankfully, the app features a handy little guide that you can use. Swiping vertically lets you switch between different categories such as steps, heart rate, exercise and so forth. Swiping horizontally lets you access more option within that category. To access any specific function, you’ll have to press and hold the central button. Tapping the same button takes you back a step. 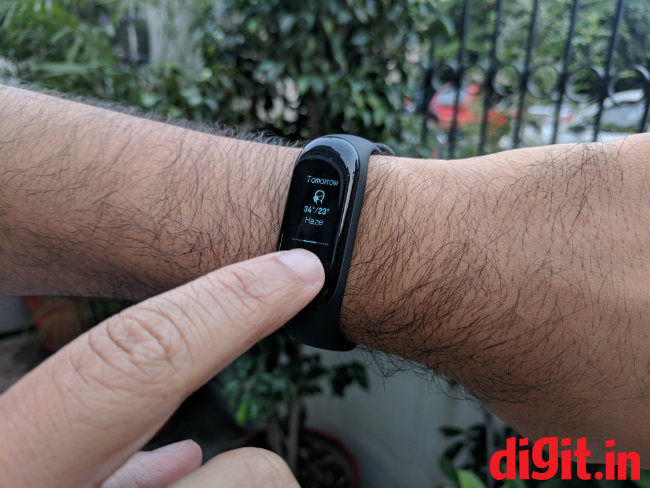 The Mi Band 3 offers a couple of interesting features besides the usual fitness tracking. These include a stopwatch watch as well as a weather updates. For the latter, the wearable offers updates for three days, today, tomorrow and the day after.

It isn’t the most friendliest of UIs that I have used on a wearable if I’m being honest, but at least the Mi Band 3 offers users a lot of features to explore. It should also be noted that the watch is quite quick and if not very simple, it may have one of the fastest UIs I have used on a budget firness tracker yet.

The Mi Band 3 pairs with your smartphone via the Mi Fit app. The app lets you metrics in detail as well as other features such as sleep tracking. Information is presented in the form of cards, which makes things intuitive and simple.

Tapping on the step counter on the app lets you access more details such as distance covered as well as the calories burned. Interestingly, it will also show how much fuel you saved which (considering the current prices of fuel) is quite funny when you think about it.

The sleep tracking available on the Mi Band 3 is adequate.You only get to see light sleep and deep sleep cycles, not REM sleep cycles. Thankfully, sleep tracking is automatic and seems to be pretty accurate, which is always a plus. 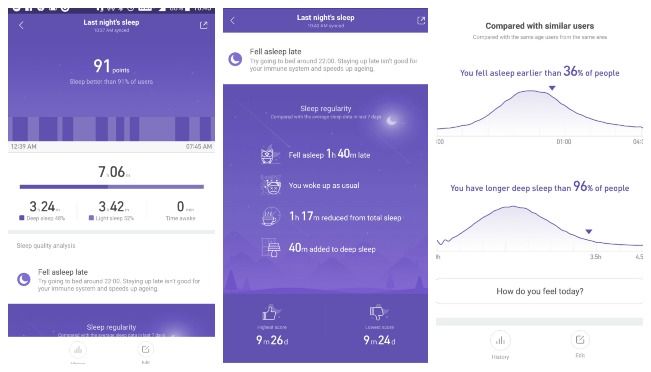 Below that is the ‘Exercise’ card, which tracks any workouts that were done when the workout option was selected. To be honest, I was pleasantly surprised to see this option in a device in its price range. I will get into more details about this feature in the next section.

It should be noted if you have any other Xiaomi device with you, it too pairs with the same app and synchronises with the data from the Mi Band 3. For example, I also use the Mi Body Composition Scale (review), and data from the scale is combined with the info from the wearable.

This however, turned into a double edged sword. I am also currently wearing the Amazefit Pace, which is manufactured by Huami, which in turn is owned by Xiaomi. And while the pace has its own app, it also pairs with the Mi Fit app, something which I didn’t realise. As a result, I thought that the band was tracking my activities on its own, however, those were from the Pace. While the band does seem to track activities on its own, the information is bare minimum. This confusion could be easily cleared if there was a logo or a sign that would let me know which information is provided by what device.

As mentioned before, the Mi Band 3 is capable of tracking workouts, which is good news for guys like me who workout rather than go out for a jog. The information that you get is pretty straight forward. It divides the time you were exercising into relaxed, light, intensive, aerobic, anaerobic and VO2 Max. This gives you a fair bit of understanding of how intense your workout was. 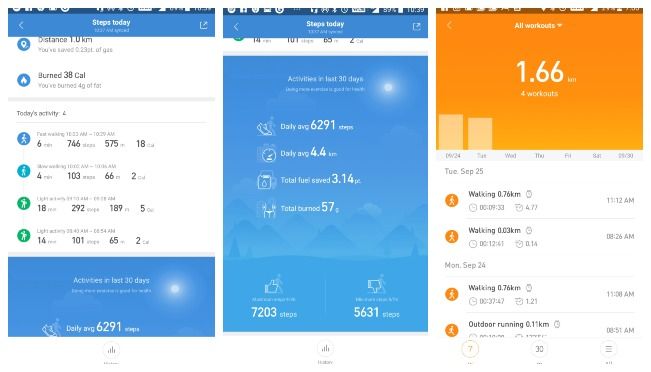 Of course, the Mi Band 3 also comes with an optical heart rate tracker. So you also get a chart of your heart rate during your workout . I follow a seven minute work out which starts off with a cardiovascular exercise and then gradually builds up again. This can be seen in the graph which peaks in the beginning, and then gradually builds up again. 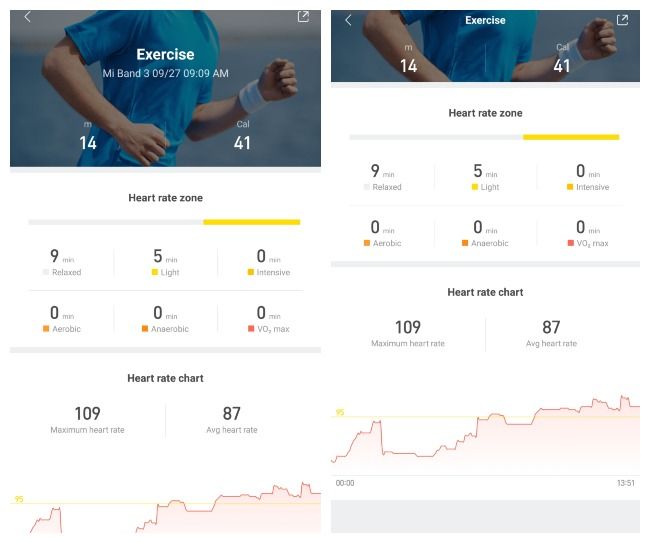 Charging the tracker is done in a manner similar to the Mi Band 2. You take out the central module and insert it into the charging cradle. The only problem here that things tend to get a little fiddly with the module slipping off the guide rails in the cradle if you’re not to careful. 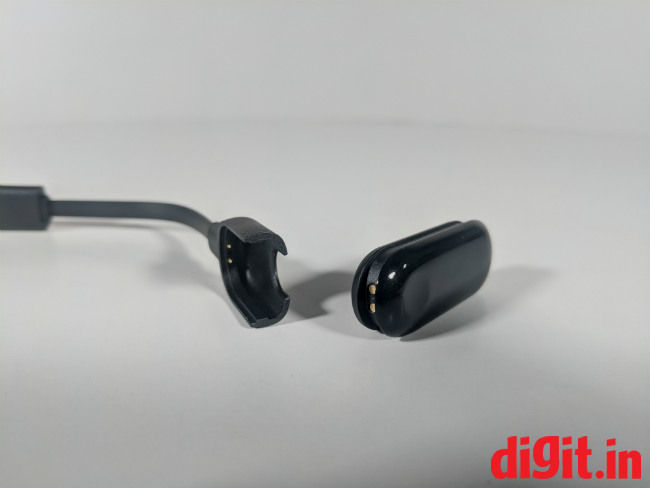 The Xiaomi Mi Band 3 is a pretty impressive little performer for its price range. However, its price point of Rs 1,999 is slightly higher than its predecessors and brings it close to devices like the Lenovo HX03F Spectra (review). Both devices are neck and neck in terms of capability, but Lenovo’s wearable offers a slightly larger display, that too in colour as well as a simpler charging system. But the Xiaomi Mi Band 3 has battery life, the subtle looks and the Mi Home ecosystem on its side. This is what you’ll have to consider when choosing between the two. 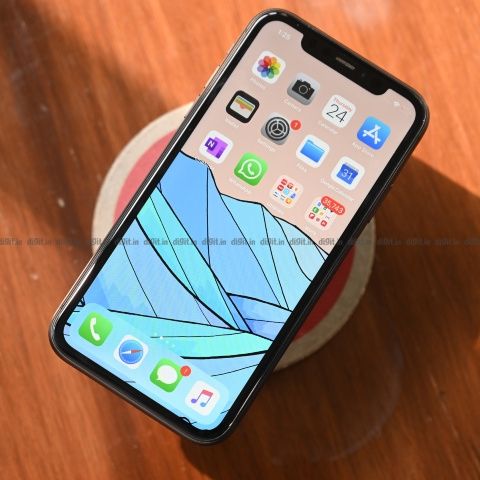