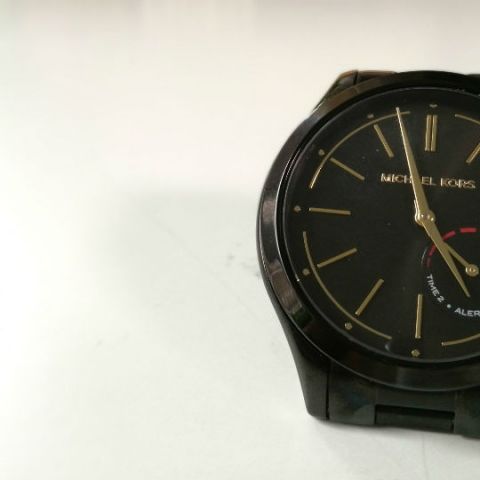 When you think smartwatches, you mostly think of a watch with a touch interface, certain health trackers, the ability to make and take calls and perhaps a comprehensive coaching app accompanying the device. That is not what you get with the Michael Kors Access Hybrid Runway smartwatch.

The MK Access Hybrid, as the name suggests, is an analogue watch with a few smart features built into it. Don’t let the Michael Kors branding fool you, the watch is actually made by Fossil, which holds the rights to manufacture smartwatches under the MK brand name. However, the MK Access Hybrid’s design philosophy does exude a Michael Kors-like luxury aesthetic. Let’s find out more.

There is no doubt that the MK Access Hybrid Slim is a good looking watch. It sports a black stainless steel finish with a black steel bracelet. The Michael Kors branding is etched in gold inside the watch, as well as on the steel clasp of the watch bracelet. However, with a 42mm dial and three chronograph-like buttons on the side, it’s not necessarily made to suit a female wrist. At the same time, Its bold, and predominantly gold watch face with gold hands, may also not appeal to many men. 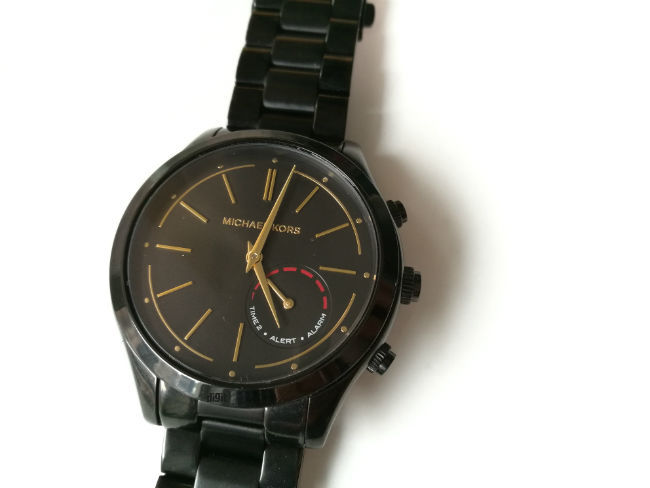 When I first wore the watch, it took me a few days to get used to the 117 gram device on my wrist. Wearing it too tight around the wrist can be a problem, since its chronograph buttons unwillingly press against the hand. I had to adjust the watch and wear it just a little further away from the point where my wrist meets the hand, in order to avoid the buttons being pushed at random. That said, I tend to prefer watches with big dials and I have to admit, I liked the way the watch looked on my slender wrist. 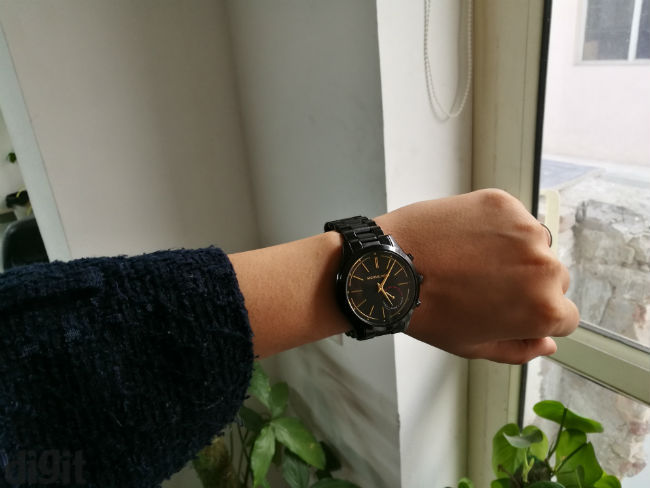 The MK Access Hybrid Slim comes with a secondary dial on the watch, with a singular, tiny hand to indicate a second time zone, notification alerts and alarms. It is also used for tracking goal progress with subtle red bars used to denote the percentage of goals achieved. These make the watchface more appealing, at the same time making it apparent that this is a hybrid analogue watch and not a typical smartwatch.

When it comes to the build quality of the MK Access Hybrid Slim, it’s safe to say that the watch can hold its own. I have used this device for almost 2 weeks now and it has had, at many occasions, a tryst inside the deep trenches of my bag, jumbled up with all sorts of adapters, cables and, well, makeup. The hybrid watch has shown no signs of scratching, both on the glass as well as the body. Unless you really mishandle the watch and are a rough user, you shouldn’t have a problem with this one losing its charms to scratches.

Another big plus is that the MK Access Hybrid Slim is water resistant upto 30 meters or 100 feet. It can easily endure sink splashes, and a dunk or two in a fishbowl. I accidentally wore it in the shower, but only for a few seconds. While this is not recommended, nothing happened to the watch and it seems to be working just fine, sans any water damage.

If a good looking, well built, and fashionable watch is what you are looking for, and you don’t mind the black and gold interiors, I’d say that the MK Access Hybrid Slim is a good option. While the blackened steel variant looks sophisticated, the watch is also available in an entirely gold coloured variant, which I would honestly skip.

Calling the Michael Kors Access Hybrid Slim a smartwatch is, honestly, a stretch. Compared to the likes of the Samsung Gear S3 and the Apple Watch 2 competing head on in terms of watch-based apps and functionality, the MK Access Hybrid is pretty basic with what it has to offer. But, that’s not necessarily a bad thing.

The wearable industry anyways suffers from a high abandonment rate due to the lack of a compelling value proposition. With all the apps and operating systems under the sun, it is still difficult to utilise Apple watch-like smartwatches to their maximum potential. The MK Access Hybrid takes away all the complications and confusions of using a smartwatch and offers exactly what it promises - an understated sense of style coupled with some smarts.

The Hybrid watch can track steps, sleep, calories and goals such as drinking water and exercising. It can also display a second time zone. A feature called Michael Kors Link allows the watch to ring a phone that it’s connected to, control music and take photos. It can also deliver notification alerts from the Bluetooth-connected smartphone and be used to set alarms that make the watch vibrate on the wrist, with customisable strengths. 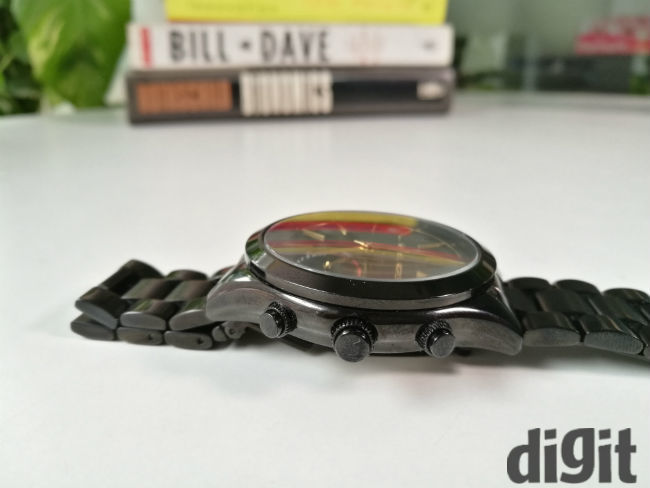 Each chronograph button has an assigned function, and when pressed, the watch hands respond to indicate the function in use. For instance, the top button can be used to view the last alert. Using the app, one can customise these alerts and assign a number on the watch to contacts and apps of their choice. Say if you assign the number 1 to your Mom’s contact on your phone, when you get a call from her, both the hour and the minute hands of the watch will point to number 1 for a few seconds to alert you of the call. You can setup 5 such customisable alerts for contacts.

However, it takes some time to memorise the numbers and their corresponding contacts. It took me 2-3 days to get used to looking at the watch and identifying the corresponding alert. I guess that is a price to pay for a smartwatch with no display.

Similar to the top button, the middle and bottom buttons have their own functions to perform. The middle button serves as the mode toggle and can be pressed to switch between alerts, alarms and second time zone. The bottom button can be used to program any one of the Michael Kors Link features mentioned above. This is another limitation of the analogue watch. I could either set the bottom button to control music, find my phone, click a selfie or display goal information. One of these options needs to be set from the accompanying app and all of them cannot work at the same time.

There is a learning curve involved when it comes to using the watch’s three buttons and it’s easy to confuse one for the other, but once you get it, you are good to go.

Step and sleep tracking is also pretty accurate, and the fact that Fossil acquire Wearable tech company Misfit, is very evident in the way the watch carries out these functions. The sleep trackers helps differentiate between light and restful sleep, while the step tracker can be used to set step goals. it also shows distance walked and calories burnt on a single screen in the app. Percentage of step goals achieved can also be tracked on the watch’s secondary dial, as mentioned before.

For an app that bears the name of a famous fashion brand, the Michael Kors Access app is surprisingly well organised. It’s easy to navigate through the watch's settings using the app. The tabs are boldly and neatly labelled. A ‘Device Features’ section within the app acts as a user guide for the smartwatch and can be accessed at any time in case of any confusion. This is very helpful initially, as I said before, it takes a while to learn how to use the device. 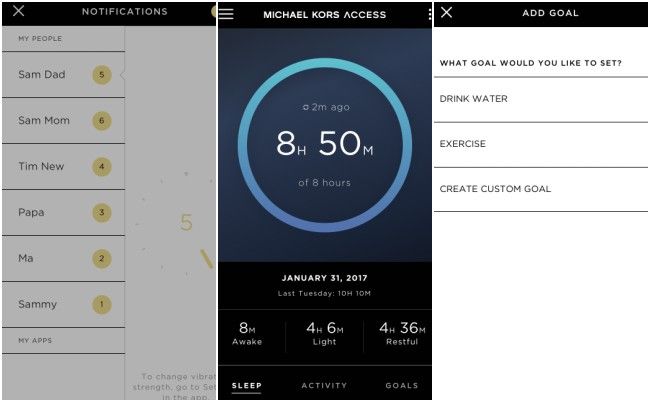 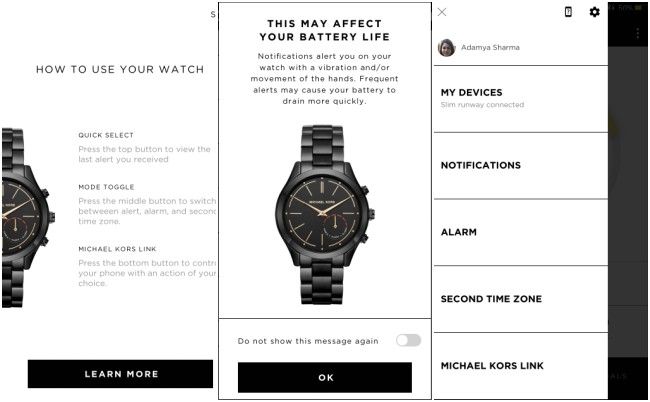 Since the MK Access Hybrid Slim is also an analogue watch it uses cell batteries, which last longer than those that watches with displays house. Michael Kors claims the watch can last for 6 months before it needs a battery replacement. With Michael Kors Link enabled, the watch may lose battery faster, but it still won’t die on you before 4-5 months, which is an ample amount of time. What’s great is that one does not have to worry about charging the device every few hours, like the Apple Watch 2 and Gear S3, but then again the functions they perform are far beyond what the MK Access Hybrid Slim offers.

If you are in the market for a luxury watch, you are better off with the Swiss watchmakers. If apps, calling, display notifications and more sophisticated activity tracking is your thing, you will have to churn out at least Rs. 10,000 more to get your hands on the likes of the Samsung Gear S3 Frontier.