Shaping our future: The road to future technology 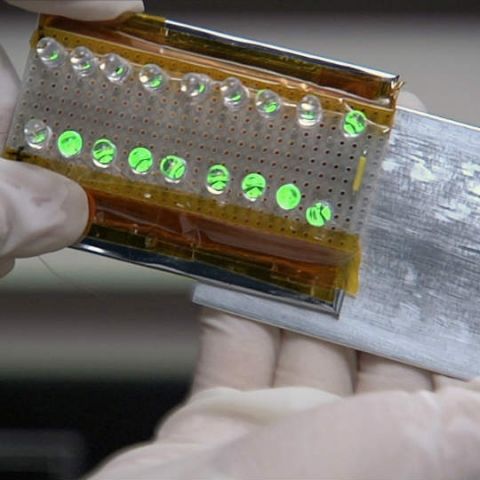 Adam Shaw, presenter of BBC's award-winning Horizons, writes about technology of our future, that can change how we live.

Imagining the future is what Horizons is all about. In this series we have looked at some of the biggest challenges facing our planet in the 21st century, from energy generation to food production and beyond. We explore how scientists across the world are rising to this challenge and developing the technology of the future. The technology of the future doesn’t necessarily have to be invented or born out of thin air. Janine Benyus, the founder of the Biomimicry Institute, explained to us in this series that nature is the greatest laboratory of all – understanding and learning from it – she says, is already bringing us huge advances. If you think about the world as a scientific core, which, through evolution and various other processes, has been trying to solve scientific problems for thousands of years, it’s done the work for us.

Biomimicry is perhaps one of the most appealing areas of science; not just because it makes for exciting television, but also because it is something that everyone can understand and has a connection to. Quantum mechanics, astrophysics, nuclear biology etc., are all really exciting areas of science but they’re very distant from ordinary people’s everyday experiences. Biomimicry, however, takes its inspiration from nature, so you can look all around the world and see inspiration.

The most obvious example of biomimicry is Velcro. When the Swiss engineer, George de Mestral, came back from walking his dog on the moors he noticed it was covered in these burrs, which he couldn’t get off. When de Mestral examined the seedpods under a microscope he marveled at how they bristled with hooks ingeniously shaped to grasp at animal fur. The plant had worked out a system of dispersing its seeds by just attaching themselves to any passing animal. He realised that being able to attach something really firmly and then detach it would be really useful and with that, he invented Velcro and changed the world of fastening forever. 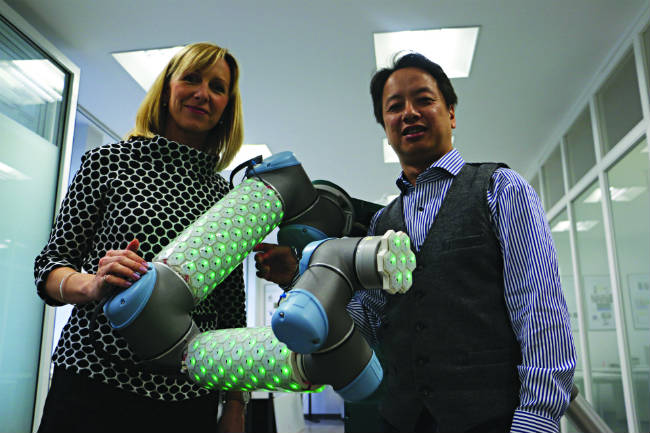 The future of energy generation and supply is one of those fundamental forces that will shape our societies. For the most part we think of energy generation as big energy plants, solar fields, nuclear power stations or gas and coal power stations, but energy is all around us. We use energy as we walk and generate energy all day, even when our clothes rub together they generate energy, we just don’t have a way of gathering that.

In this series of Horizons we speak to Professor Zhong Lin Wang, from the Chinese Academy of Science in Beijing, who is researching a fascinating new type of electricity generation called the triboelectric effect. The word comes from the Greek word ‘tribein’ meaning ‘to rub’.

Triboelectricity can create a surprising amount of power by rubbing or touching two different materials together and Professor Wang is looking at ways to collect this energy and use it. For instance on the floor of a shopping centre; when your foot touches the floor, the movement can generate a tiny electrical current. If you can capture that tiny current in a space where hundreds or thousands of people walk every day, suddenly you’re generating quite a lot of electricity. The same is true with clothing; scientists are experimenting with putting collectors on clothing and as you walk, your clothes rubbing together will create an electric charge that you could attach to a mobile phone in your pocket and have it constantly charging.

This use of movement to generate electricity has been seen before; a couple of years ago a hotel put their gym on the grid for a publicity stunt. The idea was that if you went to the gym and used the bicycle you generated electricity for the hotel and they knocked a bit of money off your bill. This research is taking that idea further and, rather than seeing us as consumers of electricity, each person becomes a generator.

I think triboelectricity is one of those things, which is really emblematic of Horizons, this isn’t something that’s going to happen tomorrow but it is fundamental science that really has the potential to revolutionise the whole world. At the moment, it’s really just a laboratory but if it’s scalable into something that everyone can do, it could not only change the products that we make but how much electricity we need, pollution, infrastructure, almost every area of people’s lives. Every- body could stop thinking about electricity generation as a power station and start thinking about it on an individual level, we’re all generating electricity and that is genuinely very exciting.

The world of medical technology is also experiencing vast changes and this series we visit a facility in California where surgeons are being trained to use robots in surgery. The robot itself does not actually conduct the surgery, it is robot assisted; it’s a bit like the game at the funfair where you have to control the pincers and grab a teddy bear. At the funfair they purposefully make it difficult to grab the teddy bear, here of course they make it much easier; to move the cutting arm, or the pincers a tiny amount you have to move your arm a lot, which means you have very precise control. This is something that is perhaps harder when doing surgery in person as moving the tiniest amount can be very difficult, but using robots you can control a millimeter by moving your arm a foot and the machine just scales that down.

I was allowed to have a go on the machinery and did the test that surgeons have to do. I had to control two mechanical arms through a series of gears, pick up tiny rubber bands and then stretch them over tiny bubbles; I mastered the movement within an hour. What was interesting was that the operating table was only 2 or 3 feet away from me and the machine was controlling the surgeon’s tools remotely, which to me suggested that there was no reason why a surgeon in California couldn’t be operating on someone in London.

This technology really raises the possibilities for new kinds of treatment as expert surgeons could operate on patients that are on the other side of the world. This isn’t something that’s in a laboratory, this is really happening now and these expensive machines are being installed in hospitals all over the world. But this new frontier in surgery isn’t about replacing surgeons, as there is always a surgeon the other side of the machine, making all the decisions, it’s about giving surgeons a new set of technological tools and pushing the frontier of surgery even further forward. 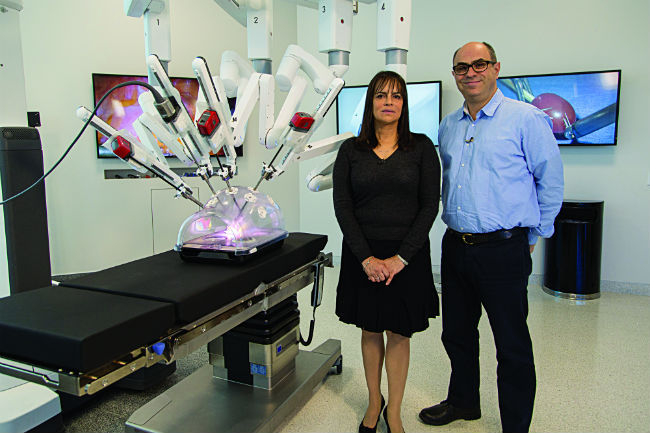 Myriam J. Curet and Adam Shaw with the robotic arms that will enable the next generation of intuitive surgery

We are now pushing at the frontiers of farming, not just growing crops on the edges of our productive land but right in the heart of our cities. This is an attempt to provide us with nutritious, locally produced food but also to revitalise an industry that is suffering from a declining and ageing workforce. When we think about frontier farms it conjures up images of farming in the wildest of places and in some cases, the opposite is true; it’s actually about urban agriculture.

There are two places that are a good example  of this; one is in Clapham, South London, where they have converted an old bomb shelter into an underground farm with polytunnels and a hydroponic system to grow fruit and vegetables. This particular venture is being partly funded by the chef, Michel Roux, who uses their herbs and salads in his restaurant. I am a little dubious about whether this can solve the agricultural problem because you wonder how many underground tunnels there can be around the world but I do think that the technology, which in itself isn’t particularly ground breaking but the vocation of it is very interesting, could be a step towards solving a big agricultural and pollution problem.

A similar approach has been used by Toshiba in Japan where they are growing lettuce hydroponically in an old floppy disk factory. They use an old floppy disk factory because it is dust free and because there are no pests, animals or disease involved there is no need for any pesticide. They also control the environment and you have to wear a mask and pass through UV lights and vacuum chambers to make sure no contaminates get into the room. These factories of food are unlike any other farms and operate like an ordinary factory process.

So there’s this irony or paradox that the frontier is much closer than you think it is. You think of the frontier as somewhere in the wild but actually, the frontier in farming is bringing it home. 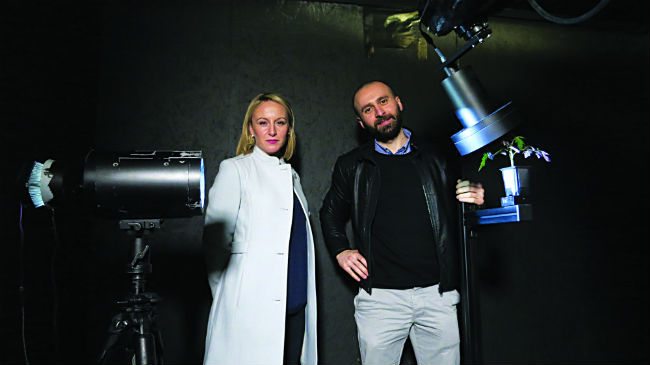 About the author: Award-winning journalist Adam Shaw is the host of Horizons, a BBC TV series that focuses on discovering the latest technologies and innovations that could revolutionize the way we live. During the first few seasons of Horizons, Adam has filmed in 18 different countries, visited 120 different companies and organisations and interviewed 150 industry and thought leaders travelling the globe searching for the brilliant ideas that have the potential to change millions of lives.