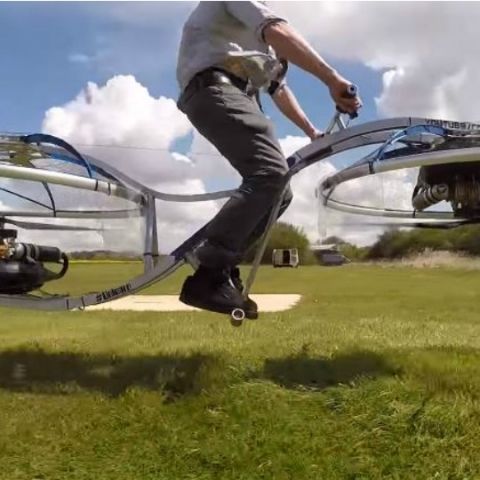 Technology brings crazy things to us, and we embrace them wholeheartedly.

About three decades ago, a certain film showed us individuals gliding around on hoverboards, and our lives changed forever. Over time, the best minds (and some incredibly over-ambitious novel ones, too) came together in attempts to create the technology, falling and failing, and falling again. Of late, the likes of Hendo and Lexus have produced working prototypes of hoverboards that do look fanciful, but are a glimpse into what we may have in our distant future.

Some, though, have more extreme solutions in mind. Very recently, we saw the Flyboard Air by Zapata Racing - a hoverboard powered by a jetpack on the rider’s back. Incredibly tricky to ride and land, the Flyboard Air became the first object to be able to fly on surfaces that are not made of metal, and is not based on magnetic levitation. Previously, XploreAir attempted a failed Kickstarter campaign with its weirdly-shaped contraption, the Paravelo flying bike. On a strikingly similar note, YouTube celebrity and crazy inventor Colin Furze has come up with the hoverbike.

The twin-propeller hoverbike, with no way of braking

The homemade hoverbike can either be described as an incredibly simple creation in terms of design, or a mechanical structure that resides somewhere between suicidal and insane. A metal frame holds together the two motors and the propellers, and there are no seats or braking mechanism to control movement. To control movement, you have to either lean to the front, backwards, or either side, similar to a segway. The only way to stop its flight is by jumping off it, leaving the risk of minor fractures and bruises to luck. In addition, the propellers have an open structure, and Furze himself calls it the ‘human blender’. Funded by automobile giant Ford’s #unlearn campaign, Furze literally stood for what the campaign was all about — forgetting all preconceived notions of how automobiles have been imagined as, and designing something completely revolutionary (the usage of this word here remains questionable).

The hoverbike can fly only a few feet off the ground, with the propellers generating enough thrust to stay afloat and be maneuvered with the help of handlebars. The lightweight S-frame metal helps keep the entire construction light, and all of this actually leads to a functional hoverbike that can fly in the air for quite some time, albeit at a very minimal height and a lot of risks.

This, though, is not Furze’s first. Some of the craziest concepts that Furze has come up with include a jet kart, a supercharger-powered baby stroller (this one beats every other “innovation” of his), and also a motorised drift bike that can shoot sparks, too. Each of his innovations seem to have a similar theme to their uncontrolled speed, and there’s an undeniable sense of thrill to them. Interestingly, Furze is officially a self-taught engineer and inventor, alongside being a plumber, a choice of profession that may not be too common among those building hovercrafts.

While some have exclaimed at Furze miraculously remaining unscathed, the recent progress of flying transportation is worth a major mention. Sure, the hoverbike is nowhere close to being viable for taking your son to elementary school, but it sure is a start!