Intelligent life out there confirmed

On August 15, 1977 a 72 second long narrowband signal was intercepted by Jerry R. Ehman at the now defunct Big Ear at The Ohio State University. This signal was never detected again despite constant attempts to search for such a broadcast. While all known attempts to decode that transmission were reported to have failed, recently declassified NSA documents have revealed that a translation was indeed achieved. The transmission appears to have been a report by an intelligent civilization about the habitability of our solar system.

Below is the translated report, verbatim:

Since the destruction of our forward outpost in the Quarak zone of the binary star system Kortan (closest translation: Tau-Sagittarii) the search for another habitable planet has intensified here on Morkan (translation: unknown). We have found a relatively new star system in the outer arm of stable zone of the spiral system of Chrontor (translation: the Milky Way galaxy). Morkanian astronomers have dubbed this system Sol (translation: Sun) and the third planet, GS03 (translation: Earth) is of particular interest to us.

Earth had always been of major interest to scientists here at Supon Institute of Planetary Sciences (SIPS) on Morkan. We first stumbled across Earth  nearly 23 years ago and having obtained a Level Five — the maximum rating — on the Foundation Habitability Meter, we focussed all our energies on obtaining funding to study and make contact with Earth.  We now work on the extensive study of planet Earth and the possibility of other habitable worlds in their stellar system: the rocky planet GS04.01 (translation: Mars)and three natural satellites of other planets coded GS05.04 (translation: Europa), GS06.13 (translation: Enceladus), GS06.06 (translation: Titan). The following is a report of the study of Earth, how it obtained its record Habitability Meter Level, and the habitability readings of four other bodies in the system.

Earth captured our attention first when we noticed its transit period across its host star (called Sun). Its orbit took approximately 365 cycles(translation: days), uncannily similar to our own 385 days. We were also able to deduce that its mass was nearly equal to ours as well, but the gravity was much higher. Earth also has a unique natural satellite (called Moon) that formed through a giant impact and remained close to the planet, but is in a slow orbital decay. Extensive study of the Earth’s atmosphere from our Orbital Telescope showed that Earth had nearly identical atmospheric components as that of our home planet Morkan. Carbon, hydrogen, oxygen, and helium are the most abundant gases in this universe; and it was thus argued that there was a higher probability to find carbon-based life than any other kind. Keeping in line with this mission, we used four main characteristics of carbon life forms to study Earth.

The Fellot Band (translation: Goldilocks Zone): Apart from the fact that Earth is rocky, it was a major find for us that the Earth sits in what is called the habitable zone or the Goldilocks zone — not too hot, not too cold, just right. It’s star is the primary source of energy and would sustain everything from the weather to the water cycle to energy for life. Life forms on Earth would potentially be able to suitably harness Sun’s energy naturally for sustenance, while protecting themselves from too much heat. The ideal temperature also supports liquid water on the surface.

Atmospheric Gases: Earth was the first body to show positive results for scans of all three major gases that constitute biosignatures – oxygen, methane, ozone. Oxygen on Earth is produced and sustained by plants alone. Methane is an abundant by-product of the biome, especially of the domestic cattle. Ozone in Earth’s atmosphere is produced by molecular oxygen combining with atomic oxygen using energy from sunlight or lightning. In our astrobiological quest, we had quite abandoned the idea of looking for each of these gases individually as they do occur naturally, such as molecular oxygen on comets and methane released by volcanoes. However, as methane does not stay in the atmosphere for a long time, we could conclusively say that the constant replenishment of methane in Earth’s atmosphere was by biological process. Indeed, the combination of methane with either oxygen or ozone provides for a good case of astrobiology.

Magnetosphere: Just like Morkan, Earth has a rotating liquid iron core which produces a protective magnetic field that surrounds the planet. This helps in deflecting and protecting Earth from Sun’s radiation and solar wind: a stream of high energy particles traveling almost at 1000km/sec, wreaking havoc and causing destruction on the atmosphere of every body it encounters in the star system. We can safely conclude that had it not been for the magnetic field, earth’s atmosphere would have eroded away ages ago, killing all life with it. The solar wind colliding with and being deflected by the magnetic field also produces mesmerising aurorae just like on Morkan.

Liquid Water: Finally, we come to what is probably the most important biosignature. Liquid water is important for two reasons: Firstly, water is a universal solvent, which means that it is that it is capable of dissolving more substances in it than any other known solvent. The greatest advantage to that is that liquid water can transport dissolved minerals from one corner of the planet to another and support life. Secondly, water needs to be in liquid form because solid ice traps nutrients and does not move. Liquid water carries the highest weightage in determining the HML of a body. Liquid water on Earth was first detected by observing the unusually high percentage of water vapour in the atmosphere.

Following the successful detection, observation, and interaction with life on Earth, SIPS now uses identical methodology to provide Habitability Meter Levels (HMLs) on four other bodies in the same star system as Earth. Bodies below are referred to with their local names and the star system is called Solar System.

Being Earth’s neighbouring but smaller planet, it has attracted a lot of attention from the natives and for good reason. Mars sits just on the outer edge of the Goldilocks zone and is rocky as well. It has confirmed reports of trickling salt water on its surface. There is barely enough heat from Sun, so it’s much colder than Earth and definitely too cold to have oceans. There is a visibly remnant magnetic field. The magnetic field that once existed might have kept the planet warm enough to contain life. Solar wind has since stripped all of its atmosphere away. Present life is most certainly absent, while past life could have existed. The magnetic field loss is still unexplained. 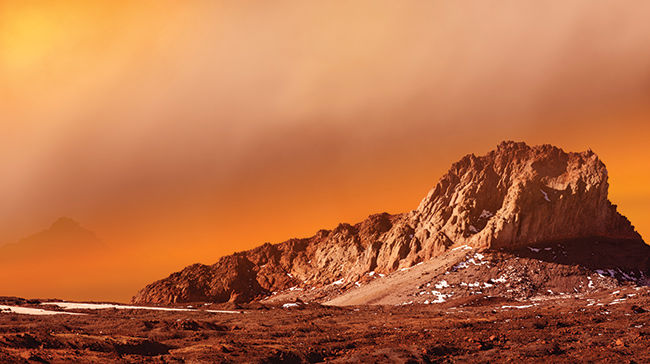 Europa is a moon of the largest planet in the solar system coded GS05 ((translation: Jupiter). It has rocky interior but a water-ice crust. Its surface is filled with lines and cracks but it is the smoothest object in the solar system. This smoothness indicates that its surface is young, because bodies whose surfaces don’t keep changing have impact craters (like Earth’s Moon). A surface change can happen due to plate tectonics and volcanism where the inner material of the planet or moon comes out and forms the new, smooth outer layer. Europa does indeed have its material from inside forming newer layers of smooth surface outside due to plate tectonics. On Earth, tectonics occur because the core is hot and molten.

On Europa, tectonics occur because of tidal flexing. Jupiter and the other large moons, (called Ganymede and Callisto) constantly tug at Europa, causing it to be agitated internally. This releases heat and provides geothermal energy. This discovery of energy also requires SIPS to reexamine the definition and usage Goldilocks zone. There is evidence of a subsurface liquid ocean of water under the icy crust. The heat from the geothermal activity keeps the water in liquid state. Europa has a magnetic field that is induced by Jupiter’s. Furthermore, hydrogen peroxide is abundant on the surface. As hydrogen peroxide decays to molecular oxygen, it could provide necessary support to life. If there is any life, it is definitely restricted to aquatic forms.

Enceladus : This is an icy moon of the ringed planet, coded GS06 (translation: Saturn), and is barely bigger than a regular asteroid. It is a suitable candidate for our study for the same reasons as Europa. It is a rocky-ice body with a surface of nearly smooth, fresh, bright water ice. The satellite’s biggest appeal is cryovolcanism. Unlike volcanoes on Earth, the ones on Enceladus spew out ice, water, salt, and dust. They are called Plumes.

Just like Europa, Enceladus’s heat comes from tidal flexing, but of a different kind. Enceladus is tidally locked to Saturn in a 1:1 resonance, which means that the same side of the satellite faces the planet and one revolution equals one rotation. Therefore, one side of Enceladus constantly faces more gravitational tug from Saturn than the other side, producing a lot of tidal forces that give rise to subsurface and atmospheric disturbances, causing heat and geological activity.Naturally, this heat keeps a global subsurface ocean of water in the liquid form and also causes cryovolcanism. Enceladus even contains organic carbon compounds and lies within Saturn’s magnetic field. Any life would be confined to the subsurface ocean. Titan is another satellite of Saturn and is the second largest satellite in the solar system. It is bigger than even the first planet in the system. It is the only satellite to contain a thick atmosphere. This atmosphere contains nitrogen for the most part, but it also contains clouds of methane that rain down on the moon. Titan has a full methane cycle like the GS03 water cycle, complete with weather, erosion, wind, and associated surface features. It is the only other body that has can sustain liquid on its surface.

It sits within Saturn’s magnetic field for the most part of its orbit and obtains energy due to tidal flexing from Saturn. It is a prebiotic body, meaning it has the perfect conditions for life to form. Our probes have showed conditions similar to theorised early Earth, the primordial soup from which life formed there.
Titan receives a low ranking on the FHM because exploration and study is not in line with looking for carbon-based life forms. Life on Titan would be unusual and exotic, if existent. But primarily, it would be unidentifiable. Organisms that could thrive in the methane lakes would inhale oxygen and exhale methane. However, proposals have been submitted for future studies of Titan as the ongoing expansion of Sun will eventually make Titan habitable enough to sustain liquid water within a few million years.

It is our strong recommendation to the Astrosciences Committee at SIPS that the study of this star system continue due to highly favorable conditions on G3. Probes to be dispatched at the earliest.

The above transmission was received from the Chi Sagittarii group of stars in the region of the Sagittarius constellation. Since the successful interpretation of the signal this region of deep space has been under regular scanning but so far, no other signal has been detected. Even more surprising is the fact that none of our telescopes have been able to detect exoplanets in this region, prompting scientists to think that this was probably a message transmitted accidentally in the wrong direction by a moving ship.