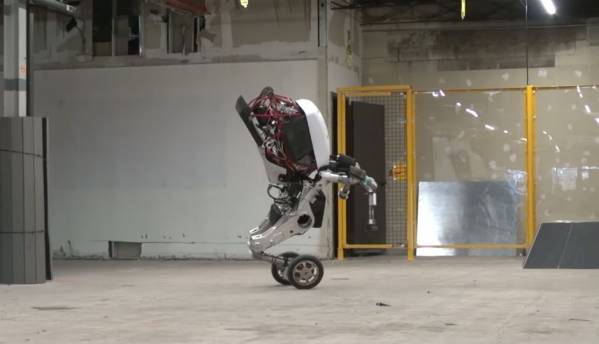 Boston Dynamics' newest robot has a 'Handle' on its wheels, can jump and tilt

Boston Dynamics' new Robot is called Handle, is surprisingly lifelike, but on wheels.

Boston Dynamics, the Alphabet-owned robotics company, has been making waves with its robots for a while now. The company maintains robots for the United States’ Defense Advanced Projects Agency (DARPA) regularly and has showcased some impressive, and eerily life-like robots in the past. But, the company’s newest robot may trump everything it has done before.

Known as the Handle, the robot breaks barriers by way of the confidence it shows in its movements. Much like other robots from Boston Dynamics, this one also resembles an animal, but it seems much more comfortable with movements, compared to traditional robots. Instead of moving tentatively, one foot after the other, the Handle has two wheels attached to its legs, and it zips around just like a bicycle. It’s actually a very good likeness to the Wild Weasel assault system from 1986 children’s cartoon, Centurions. Handle, though, uses two wheels instead of becoming a unicycle.

Over the years, robots have been stiff in their movement. In fact, many of Boston Dynamics’ own robots have shown such traits. Handle, though, can carry 100 pound loads, while moving with almost no stiffness. The video below shows what the robot is capable of.

The video, now publicly available, was first seen in January, when Steve Jurvetson, a venture capitalist, posted it on YouTube. At the time, Marc Raibert, CEO of Boston Dynamics, called the Handle a “nightmare inducing” robot.

Like humans, Handle seems to understand what its body can do. It bends slightly when going around in circles and it seems to roll around on uneven terrain without toppling. In fact, the video also has handle rolling down a flight of stairs without losing balance, while the robot can zip towards a load, pick it up and then zip back to its destination. It can even jump, while on the move.

Handle’s capabilities are basically underlined by the dynamic movements it makes. The bipedal robot is 6.5 feet tall and can travel at 9mph. It can jump up to 4 feet vertically and uses both hydraulic actuators and electric power to operate. It has a range of 15 miles on a single battery charge.

You can find all of Boston Dynamics' robots here.