5 times that space totally shocked us

Looking up at the heavens on a moonless night, the inky blackness of the sky speckled with the few stars that light pollution still allows us to see, represents the vast depths of human ignorance. Despite the best efforts of theoretical physicists and despite what they might tell you, we are still only at the tip of the proverbial iceberg of the true nature of cosmology and astrophysics. Over the years theories have been raised, proved, rebutted, brought down and reformulated and with every successful attempt, we get a little more insight of how space works. Yet, despite this it is not the unknown that surprises us poor mortals, it is the disproving of the known, of theories that we assumed to be true; so true in fact that we often didn’t even bother questioning them. Time and again, human complacency has been dealt a slap in the face by some shocking observations about space. In this article, we look at five instances where space has shocked us and given us much to ponder about.

The expansion of the universe

The expansion of the universe was confirmed through many astronomical observations in the early half of the 20th century. This was the period when the Big Bang hypothesis was gaining popularity, a hypothesis that stated that the universe originated from one single event, what is scientifically known as a singularity. What was surprising, however, was the observation that galaxies that are further away seem to be moving away at a faster speed. At first thought, this may seem contradictory as it seems to imply that all objects are simultaneously the centre around which the expansion occurs. This conundrum is resolved by hypothesising that it isn’t galaxies as such that move away from each other, it is space itself. To visualise this, take a balloon and draw a few dots on the surface with a pen. 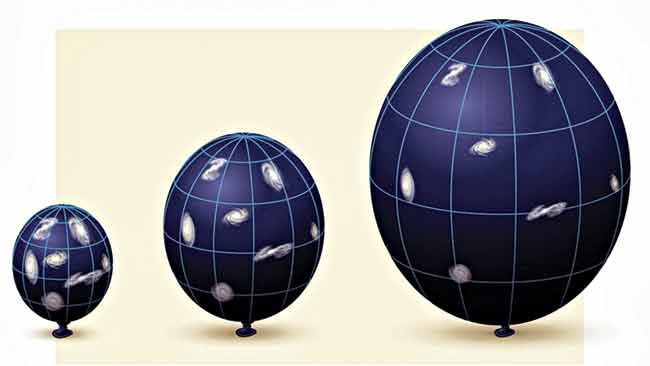 Now, as you blow into the balloon, you are basically simulating the same kind of expansion that happens in the universe, where the distance between the galaxies seems to increase because the balloon itself is expanding. If we trace this back, it implies that space(and consequently time) were concepts that were created at the moment of the Big Bang. Till date, this remains the most popular theory for the origin of the universe, but this also poses a problem as we can no longer reasonably study what happened before the Big Bang. This observation had huge impacts for cosmological models and continues to serve to remind us that the universe works in strange ways.

The discovery of cosmic background radiation

Around 1950, it was predicted that the entire universe is bathed in a radiation. This radiation is a remnant of the biggest cosmological event of all time: The creation of the universe itself. This radiation, called cosmic background radiation is the oldest light in the universe, dating back to the time of the recombination from Big Bang cosmology. This theoretical prediction was a massive requirement for validation of the Big Bang hypothesis. More than that, it also provides a way for us to see more in the universe, giving us a new pair of eyes with which to survey the skies. Normally, when one looks at the cosmos through a traditional telescope, the space between stars is dark. However, through a radio telescope, there is a faint glow when tuned to the right frequency and temperature that gives us a vast range of data that was unavailable earlier. A lot of predictions were made about the exact nature of this radiation and the properties that it would possess but the actual discovery was accidental. Working at Bell Labs in Holmdel, New Jersey, in 1964, Arno Penzias and Robert Wilson were experimenting with a 6 meter (20 ft) long, supersensitive horn antenna which was originally built to detect radio waves bounced off satellites. 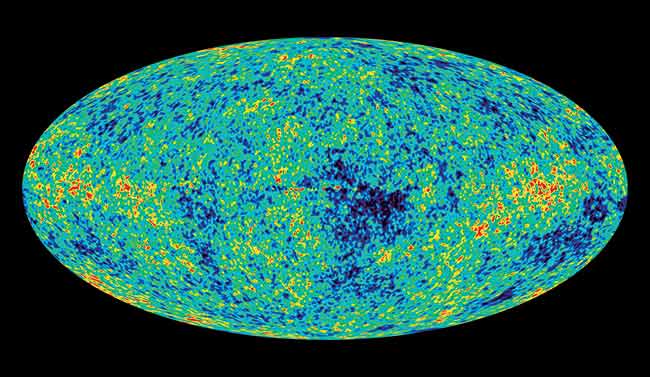 A map of the cosmic background radiation in the universe

These radio waves they were studying were faint and required a lot of noise cancellation and a reduction of temperatures to 4K. However, their observations were different from their expectations: They saw a low, steady noise that was omnipresent and certainly not originating from our solar system. After clearing some pigeons nesting in the antenna and cleaning out the accumulated droppings, the noise remained. A friend (Bernard F. Burke, Prof. of Physics at MIT) told Penzias about a preprint paper he had seen on the possibility of finding radiation left over from an explosion at the beginning of the universe’s existence by Jim Peebles. This made Penzias and Wilson realise the significance that their discovery had. The radiation detected by Penzias and Wilson and its characteristics fit exactly the radiation predicted at Princeton University by Robert H. Dicke and his colleagues. This radiation was subsequently identified as a signature of the Big Bang. For their accidental discovery and the ingenious interpretation, Penzias and Wilson were awarded the Nobel Prize in 1978.

These are not shocking because of some obscure deviation from theory, rather these star systems are some of the most breathtaking cosmological objects in the sky. As the name indicates, these systems consist of two stars. These two stars orbit around each other, or to be more precise, they orbit around their centre of mass. From plenty of science fiction examples, we know that this leads to some extremely wonderful phenomena. If there were a planet associated with this system, one would witness two sunrises and two sunsets, one after the other. The surprising part is that the equations that govern the motion of a binary star system are extremely simple to comprehend Newton’s laws of gravitation alone will give good approximations of how a binary star system works. However, for such a system to be created at all, you will need two stars of a particular mass to come close to each other with a particular velocity. Yet, there are plenty of binary star systems in the universe. In fact, the recent observation of gravitational waves at the LIGO facility in the USA was because of waves emitted by a binary black hole system, which is a binary star system where the stars have collapsed in on themselves. These systems represent some of the best artistic work that one can observe on he infinite canvas of the night sky. 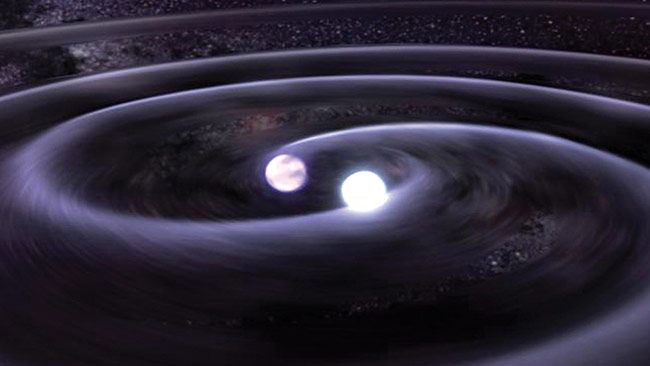 An artistic visualisation of a binary star system

Despite the extremely vast size of the universe, there are relatively few planets that can potentially harbour human civilization. A lot of this has to do with the fact that these planets are too far away. The question then is if there are any planets close by that aren’t exactly ideal for human civilization but provide enough of the basic necessities so that technology can take care of the rest. One of the most basic requirements for long-term habitation is water. Evidence of water (in the form of polar ice) is being confirmed time and again by observations as well as by tests conducted on the Martian surface by the NASA rovers that continue to roam the surface. There are also proposals to send the first team of astronauts to inhabit Mars on a trial basis. All of these point to the possibility of human civilisations on the red planet at some point in the future, a statement which, 100 years ago, would have earned the writer a one-way ticket to an asylum. 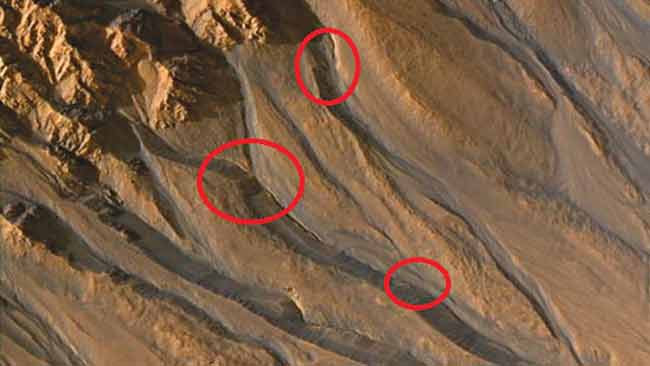 The mysterious WOW! signal and the search for alien life

There are some facts about the universe that leave humanity both exhilarated and utterly terrified at the same time. The fact that we may, despite the nearly infinite expanse of the universe, be alone is one such example. For a long time, we have been harbouring the hope that alien life may exist, yet we found absolutely no evidence to back that hope up. However, in 1977, Earth received a strong radioband signal, a signal so strong that it was hypothesised that it may have had an alien origin. In recent years, the speculation has died down as no further evidence has been found that the signal, nicknamed ‘WOW!’, had an alien origin. In 2012, a response to the signal was generated and beamed out to the galaxy. The signal, a constant pulse that the Arecibo Observatory in Puerto Rico sends out into the universe has so far seen no response. In addition to the signal sent out by the Arecibo observatory, there exist entire organisations devoted to scouring the skies for signs of life. SETI or the Search for Extra-Terrestrial Intelligence is an organization and a worldwide effort spearheaded and supported by individuals of worldwide repute such as Stephen Hawking and Yuri Milner. 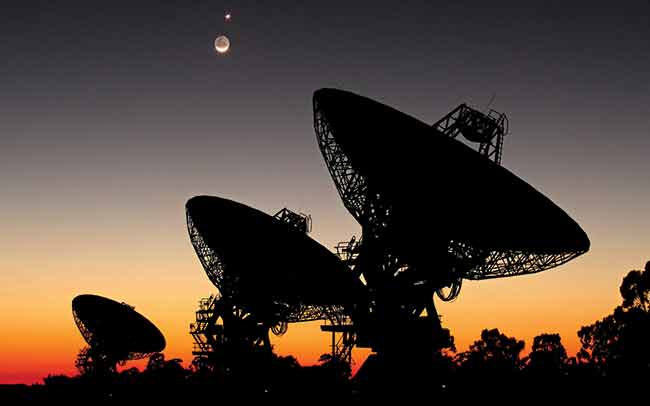 SETI receivers looking to the sky for any sort of life

For many years now, SETI has been searching for life in the stars, operating under the belief that any existing civilizations out there will emit some signal of communication or at the very least, respond to the scans that SETI does with its multi-million dollar infrastructure, such as the Allen telescope array at the University of California, Berkeley. The SETI@Home project, which uses idle operating power of computers and laptops around the world to scan for extra-terrestrial life in the cosmos has returned no results either.  This may possibly be because alien civilizations, if they do exist, may not be advanced enough to be able to respond, but the fact remains that it is a reasonable expectation that among the millions of planets that can hypothetically support humanoid life forms, at least one of them should respond. The very possibility that we may be truly alone, a tiny speck in this vast ocean, is about as shocking a truth as science can throw at us. Yet, SETI continues its search and all we can do is wait. And hope.

This article was first published in July 2016 issue of Digit magazine. To read Digit's articles first, subscribe here or download the Digit e-magazine app for Android and iOS. You could also buy Digit's previous issues here.