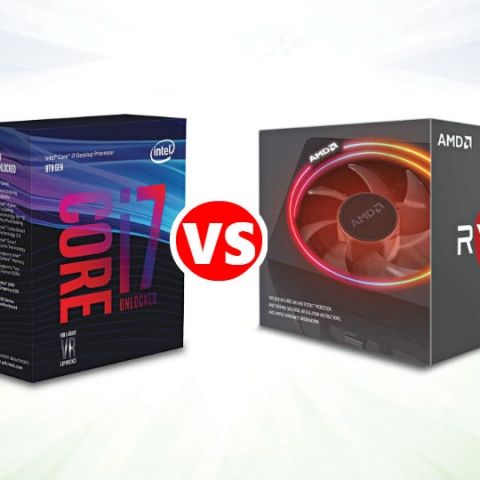 AMD is back with a revision of their desktop CPUs and this time they’ve polished out most of the kinks and brought out a CPU that’s all set to set fire to the CPU battle yet again. The new lineup is led by the AMD Ryzen 7 2700X which is still rocking 8 cores / 16 threads but thanks to a new process node, it is supposedly more efficient and performant as well.

The Ryzen 7 2700X is retailing at an SEP (Suggested Electronic Price) of Rs 24,490 and we’ve seen Indian retailers selling it for Rs 29,488 which is roughly Rs 2,000 more than the Intel Core i7 8700K that it’s set to compete against. The Intel Core i7-8700K is the current king of the hill. It has two fewer cores than the AMD CPU but its IPC is way greater and thus, it excels in single-core performance. Let’s see how they match up this time.

Both the Intel and the AMD CPUs ship with unlocked multipliers. The Intel Core i7-8700K (review) has a lot of overclocking headroom and has been overclocked to 7405.12 MHz as of writing this while the Ryzen 7 2700X (review) has been clocked to 6000 Mhz. The former has been out in the market for a long time so there are a lot more overclocking submissions on HWBOT and the next couple of months will paint a better picture of how well the 2700X overclocks. As for the stock frequencies, the 8700K starts off at 3.7 GHz and tops out at 4.7 GHz while the Ryzen 7 2700X has a base clock of 3.7 GHz and has a ceiling of 4.3 GHz. Overclocking the Intel CPU is ridiculously easy. Simply ramping up the multiplier takes you quite far and you only need to start tweaking the granular controls once you’ve hit 5.2 GHz and above. AMD’s CPU, on the other hand, isn’t that easy to overclock. Ryzen Master lowers the barrier significantly but you’ll hit a snag before you even go past an additional 300 MHz overclock.  Then onwards the dance of the clocks begins. Thankfully, scouring through HWBOT gives you a decent set of voltage values you can use to properly push the 2700X further but in comparison to Intel, it’s simply not as easy

Let’s see how these two CPUs perform out of the box.

Under idle conditions, the Intel Core i7-8700K consumed about 11.3 Watts which is very good. The figures were jumping between 11.2-11.4 W so we averaged it out at 11.3 W. To achieve this idle state we killed off all non-essential services, we did not install any of the bloatware that came with the motherboard and if possible we picked the lean software/driver package for any of the motherboard’s components. We then ran Cadalyst Systems Benchmark and that too under the default configuration. After awhile the power draw settled down to an average of 37 W. And lastly, we ran Prime95 with AVX enabled and the total power consumption went up to 160.3 W. That’s quite a lot for the Intel Core i7-8700K. We should also mention that the cooler used was a Corsair H115i PRO with the entire rig placed right in front of an air-conditioner. We did not overclock the CPU this time around.

In case of the AMD Ryzen 7 2700X, we saw the CPU consuming 12.9 W on average under the same idle conditions as the Intel CPU. However, being on a different motherboard, there’s going to be a slight difference in the reported numbers. It’s not an apples-to-apples comparison. Thankfully, both boards were from GIGABYTE with similar quality of components for the VRM circuitry so there shouldn’t be that large of a difference in the overheads of the reported values. In the Cadalyst load test, the Ryzen 7 2700X ended up consuming lesser power than the Intel Core i7-8700K which was quite surprising. At 31 W, the difference between the two CPUs is quite significant. Then we then ran Prime95 hoping that it would go berserk. And that’s exactly what the Ryzen 7 2700X did as it shot up all the way to 205 W. The delta between the two CPUs in the Prime95 test was a massive 44.7 W.  So the AMD CPU has certainly improved where it matters the most – in the midrange. After all, no PC is going to hit the ideal idle condition or be continually stressed the way Prime95 does.

We begin with Cinebench and it’s quite evident that the AMD Ryzen 7 2700X ploughs through in the multi-threaded run whereas it still lags behind the Intel Core i7-8700K in the single-threaded run. The same can be seen in Cinebench 11.5 as well. Compared to the first gen Ryzen 7 1800X, it’s a significant improvement and has come quite close to the 8700K but never crossed that of the 8700K in our benchmarks. The 8700K scored 1394 points in Cinebench 15 nT and 197 points in Cinebench 15 1T while the Ryzen 7 2700X scored 1801 and 177 in the same test. The scores scaled similarly in Cinebench 11.5 as expected. POV-Ray being a multi-threaded benchmark sees the Ryzen 7 2700X excel but it comes very close to the Intel Core i7-8700K. In our tests, the lead was just 2%. We then ran our Handbrake benchmark which basically consists of transcoding a 4K video clip from one CODEC to another without changing the resolution. Handbrake is quick to incorporate new CPU encoding engines and has the Intel CPU leading in the test. The 2700X is not left far behind and comes in as a close second to the 8700K.

We then used Blender which is a fairly well known open-source rendering software. In this benchmark, we’re looking at the time taken for a run to finish rendering. So the CPU with the lower score in this test is the better one. The 2700X finished the run earlier than the 8700K with a difference of 41 seconds. That’s a pretty impressive gain even when compared to the older 1800X. Over the past year, we’ve been receiving a lot of requests from content creators for PC configurations and it seems that the 2700X is going to be recommended from now on. 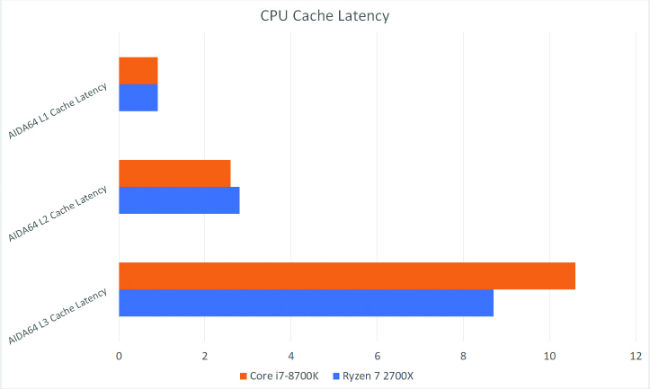 We’ve stopped using PCMark 8 for our CPU tests with the advent of the newer PCMark 10 benchmark. For our tests we do not run PCMark 10 in its default state. We turn off OpenCL to ensure that the IGP/GPU doesn’t affect the benchmark run. The delta in this case was 194 points with the 2700X in the lead.

One of the things that AMD said they’d improved in Ryzen 2nd Gen was the cache latency and in AIDA64’s cache tests we can see the claimed improvement in cache latency in the 2700X. The numbers are practically equal to the Intel CPU, especially L1 and L2 cache latencies.

Lastly, in the compression and decompression benchmark within 7-Zip, the Ryzen 7 2700X can be seen with a significant lead. It appears that 7-Zip is more core-conscious as compared to the older WinRAR benchmark. 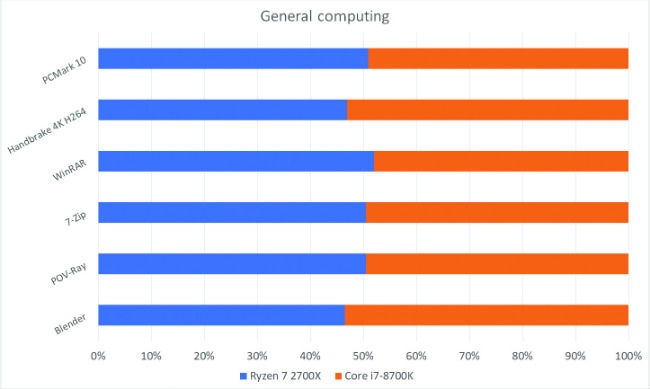 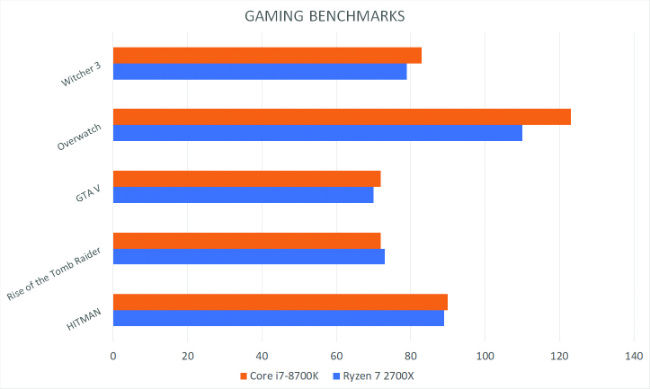 AMD’s latest desktop flagship certainly has all the bells and whistles that they promised. For most folks who’ve been sceptical of moving to a new platform, a revision or an optimised iteration is what they’re looking out for. One which improves upon the drawbacks of the previous generation to provide a more streamlined performance across all use cases. Ryzen 7 2700X comes ahead of the Intel 8700K in all multi-threaded tasks but even with the improvements to the whole manufacturing process and the microarchitecture, single threaded performance isn’t exceeding that of Intel. But that’s not to say that it hasn’t improved, it certainly has managed to even the scales. The gaming performance of the new CPUs is just about at par with Intel CPUs so all gamers who held out on getting the Ryzen CPUs can certainly take the plunge now. The only issue right now is that the Indian prices don’t match the International pricing, so we don’t expect the same sales for the new Ryzen 7 2700X as the Intel Core i7-8700K. For everything else, they’re “practically” twins.

This comparison was first published in the May 2018 issue of the Digit magazine. To subscribe to the Magazine, click here.