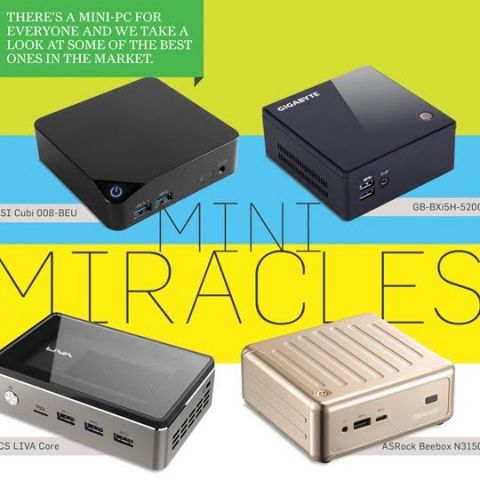 The Mini-PC market is slowly saturating with devices of every size and feature set within the domain that would qualify them as a Mini-PC. You have the credit card sized ones like the LIVA Core from ECS which are powered by an Intel Core M 5Y10c and, on the the other end of the spectrum you have the  ZOTAC Magnus EN970 which has an Intel Core i5 - 5200U making it a lot more powerful. However, putting both of them in the same bucket is a little unfair on the little ones. After all, they put a lot more effort in squeezing in all the components within a smaller footprint. So we decided to class them apart. We’ll be taking a closer look at the ZOTAC Magnus EN970 and the ASUS GR8 which occupy about four times the volume, and thereby, can squeeze in a lot more powerful components. Also, comparing a machine that costs Rs. 9,000 with another that costs Rs. 80,000 is not only unfair but also outright silly.

This leaves us with the ASRock Beebox, MSI Cubi, ECS LIVA Core and the Gigabyte GBBXi5H-5200. All four are small form factor machines with a variety of hardware for all kinds of usage scenarios. While this isn’t an exhaustive comparison, you should be able to find some connect between the specifications of one of the competitors with what you hope to buy. 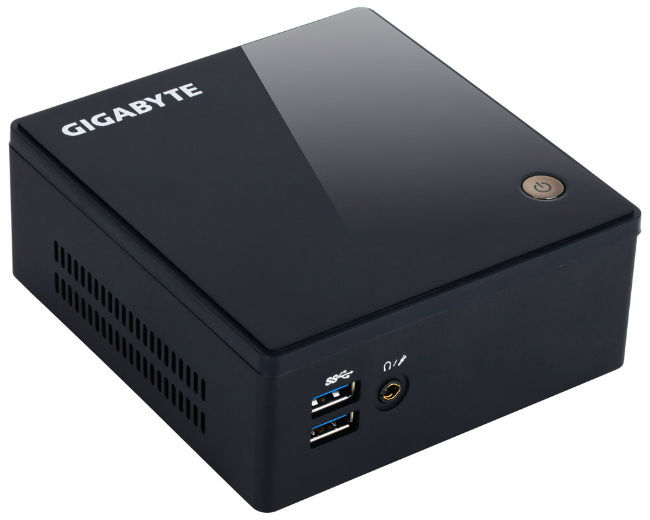 Surely the Mini-PC with the beefiest hardware among all the competitors in this test. The Gigabyte Brix GB-BXi5H-5200 is powered by an Intel Core i5 5200U which is commonly used in laptops. The 15 W Broadwell  processor is not only clocked at the highest among all, but the onchip IGP is also the highest clocked with the most number of execution units. It also happens to be one of the two Mini-PCs in this comparison with 4K playback capability.

It has a sleek exterior and is relatively heavier once fully setup but not too much to be an inconvenience. On the inside, the construction is a testament to the durability that Gigabyte has been known for. Moreover, the components are well spaced and, the HDD and the CPU are well ventilated. 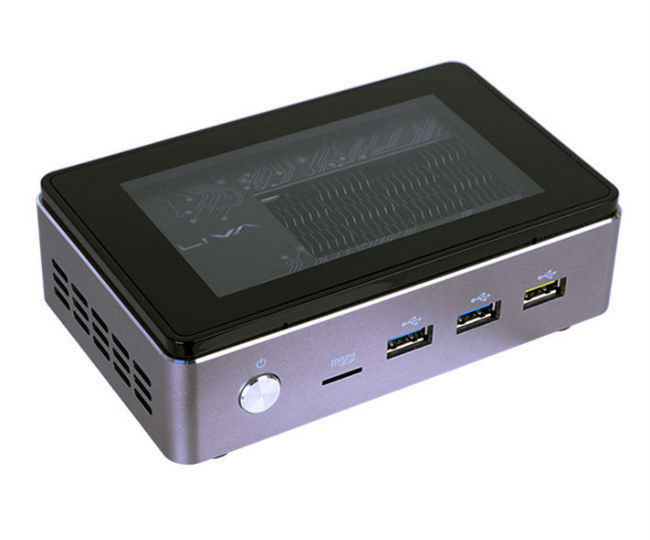 Terribly close on the heels of the LIVA X comes the LIVA Core. ECS has maintained the same build quality with the LIVA Core as  was the case with the LIVA X.  It has the second most powerful processor in this comparison test and an equally powerful IGP to go with it. Moreover, it offers more value for money since it comes pre-loaded with an Intel 535 series 120 GB M.2 SSD and RAM. This does allow for greater quality control and removing user intervention from the equation is a plus point for those who want a plug and play device.

The body is made out of one solid piece of metal and it scores high in the looks department. Another plus point is that it has a massive heatsink that gels well with its external appearance. It is essentially, one huge heatsink. 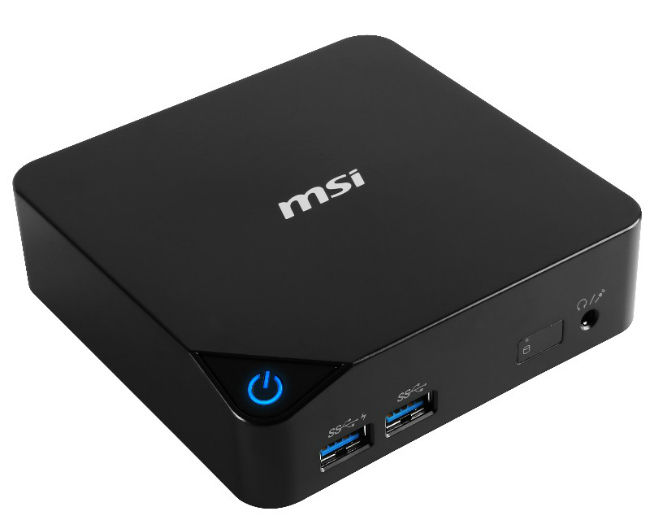 And with the MSI Cubi, we’re looking at an entirely different price segment. This is the sub-10K range entry level range. Most devices in this bracket are barebones and have a ULP SoC at their heart. In this case, the MSI Cubi has an Intel Celeron N3205U and the on-chip IGP isn’t spectacular. But these devices weren’t meant for an all round usage scenario. It’s mostly office work and media consumption that suit this device.

When it come to build quality, one would assume that there will be certain compromises made. While it doesn’t match up to the LIVA Core, it isn’t flimsy by any means. The chassis  is made out of plastic and metal. The extra base plate is a welcome addition and PCB on the inside is easy to remove and clean. 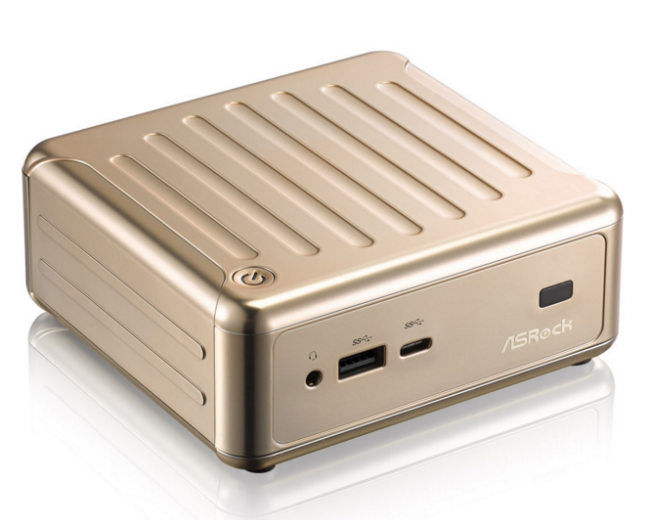 Right behind the MSI Cubi is the ASRock Beebox powered by the Intel Celeron N3150. This quad-core Braswell SoC is  clocked slightly higher than the Cubi’s 3205U and that gives it a slight advantage. This particular Beebox is the only one with a USB Type-C port and has 2 HDMI and a Display port.  This makes it the only unit capable of running three displays simultaneously. Also, this was the only model that came with a media centre remote which made it a little more of an attractive HTPC option.

Like the Cubi, the Beebox also makes use of a plastic and metal combination for the chassis. And disassembly is quite simple as well. Scratches on the light coloured chassis  are really visible but then again, you can opt for a darker shade.

When you to make a transition from a laptop or a more powerful form factor, you’d feel at home with the Gigabyte Brix. The Intel Core i5 5200U pretty much aces all the benchmarks with this particular unit scoring the highest in all benchmarks. The on-chip IGP is sufficiently powerful to crunch out approximately 30 FPS in quite a few games with minimal reduction of graphics settings.

While the device isn’t made for hard-core gaming like the MAGNUS EN970 and the ASUS GR8, you still can get away with a fair amount of gaming.

All units compared in this test use the same Intel 3160NGW 802.11ac Wi-Fi module, so a performance difference in that aspect is out of the question. All that’s missing is a USB 3.1 connector and this’d be untouchable.

And then there’s the ECS LIVA Core which turned out to be the second highest performer in the comparison test. The Core M-5Y10c is slightly older than what the competing products are powered by but it is also the one with the lowest TDP making the LIVA Core relatively cooler. This is why it’s the only one using passive cooling effectively. And less moving parts bodes well since the LIVA Core is a little difficult to disassemble.

The Intel Core M 5Y10c’s HD 5300 being a generation older doesn’t perform as well as the rest so it ended up scoring the least in all gaming benchmarks.  Overall, it more than compensates for this by scoring second highest in all computing benchmarks. The Intel 535 Series 120 GB SSD gives it one of the best storage characteristics as well.

Regrettably, this particular CUBI scores the least in our compute benchmarks but that doesn’t make it a bad investment. It is designed for office productivity and casual multimedia consumption. And it performs these tasks without any hiccups. It’s gaming performance can be said to be a glimmer of sunshine as it does perform better than the LIVA Core and happens to be the second highest performer overall in graphics benchmarks. So if you turn down the graphics settings all the way down, then you can manage playable FPS rates.

Internally, it’s cooling capabilities also happen to shine through. It has an active heatsink with a dedicated heat-pipe  which helps bring down temperatures after bursts of high performance runs.

Standing out from the crowd for implementing features that are very premium in an economy segment price bracket is the Beebox N3150. However, in an attempt to be the jack of all trades – which it is – it takes a few steps back in almost all departments. It’s compute performance pegs it at third position in this comparison and its graphics performance pegs it at third as well.

Casual gaming is all you should expect from the Beebox N3150. But like we said, it has managed to squeeze in 4K playback on one display or power three separate displays simultaneously. Overall, its performance is just a little ahead of the MSI Cubi but with the amount of  features that ASRock have managed to pack in, the Beebox does manage to be the jack of all trades in this comparison.