A comprehensive look at the AMD890GX chipset

Nearly a year and a half after launching the 790GX integrated graphics chipset, AMD has come out with its successor called the AMD 890GX. It is the first series 8 chipset launched by AMD. Feature-wise, comparison between the 890GX, the 790GX and the 785G throws up a lot of similarities. However, the new Southbridge SB850 has a lot of additions. It also comes with an HD4290 integrated graphics solution, which apart from offering a flawless gaming experience, also allows you to do a lot of other things such as enhanced video viewing. But first up, let's take a look at the architecture of the AMD 890GX. 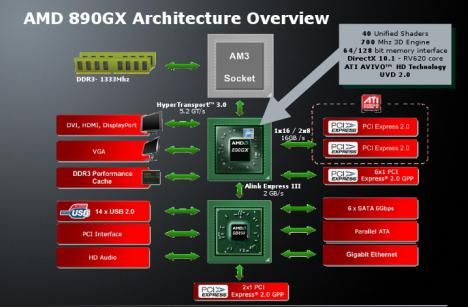 As can be seen, this is one of the few AM3 sockets around and has a HyperTransport 3.0 connecting the processor to the north-bridge. On comparing the 890GX with the 790GX, one comes across many similarities like the 55nm fabricated chipset, 700MHz of core clock frequency, and eight shader processors. But this chipset comes with an upgraded graphics solution in the HD4290 which now supports DirectX 10.1. The integrated graphics solutions has 40 shader processors and is built on the the RV620 core. Presence of DirectX 10.1, an upgrade from the DX10 supporting AMD790GX is not of much help when it comes to gaming. There is only a minute performance boost. To see a considerable improvement, you will have to use an external graphics card. With the 890GX, AMD is future-proofing the motherboards, as this chipset is compatible with the six-core, 45nm Thuban processors that AMD is planning to release in the April-May period.

The presence of two ATI Avivo HD units enhances video decoding. This means, next time you play an HD video, the majority of the decoding will be done by the GPU and not the CPU, thus leaving it free to do other work. The Unified Video Decoder 2.0 which is bundled in with all the HD 4000 series graphics cards, allows full bitstream decoding of H.264/MPEG4 video and also supports dual-video stream decoding, which enables one to have a sharp picture-in-picture viewing experience.

The HD4290 supports Blu-ray 1.1 provided you have a Blu-ray media player and a compatible HD monitor. The UVD (Unified Video Decoder) 2.0 helps in decoding high-definition videos and it also supports picture-in-picture viewing. High quality video scaling allows you to watch DVD quality movies in HD quality. This is a very desirable feature for HTPC systems.

The new SB850 southbridge has a lot of interesting new features as compared to the previous version - the SB750. The Alink Express III connecting the northbridge to the southbridge has a bandwidth with a data transfer speed of 2 GB/s which is twice that of the previous AMD790GX-SB750 combination. This was inevitable in a way because there is a native support for the supremely fast SATA 3.0 on board. It has six SATA 3.0 ports which give a data transfer speed of six GB/s. The six GB/s support also extends to RAID drives, which is an industry first. Moreover the presence of a 24 PCIe 2.0 lanes with support for CrossfireX can be used to exploit the bandwidth to its maximum.

The CrossfireX support can combine the graphics processing power of a chipset with another graphics card to give a great gaming experience. Presence of Sideport memory also assists in graphics-related tasks. This is another aspect which brings out the future-proofing aspect of this chipset. USB 3.0 support is not native on the chipset, but it supports as many as 14 USB 2.0 ports. However, AMD claims that motherboards that will house the chipset will most likely come with an USB 3.0 controller, which allows USB 3.0 drives to be connected to the system.

Advanced Clock Calibration is supported by the SB850 which allows you to unlock the locked cores in AMD Phenom II X2/X3. Processor manufacturers lock defective cores on processors by a process called chip harvesting or feature binning. ACC allows you to unlock these cores by setting the ACC to auto-mode in the BIOS and rebooting the system. Core unlocking may or may not happen based on the motherboard.


We recently received two motherboards based on the AMD 890GX chipset namely the Gigabyte GA-890GPA-UD3H and the ECS Elitegroup BlackSeries A890GXM-A. Using a similar AMD Phenom II X4 955 processor along with two 4 GB Corsair DDR3 RAM and a Corsair HX620W power supply, we ran a series of benchmarks to test the newest chipset from AMD. 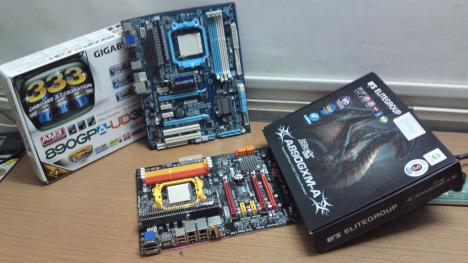