OnePlus 8 gaming performance tested: How does it fare against iQOO 3 and Realme X50 Pro? 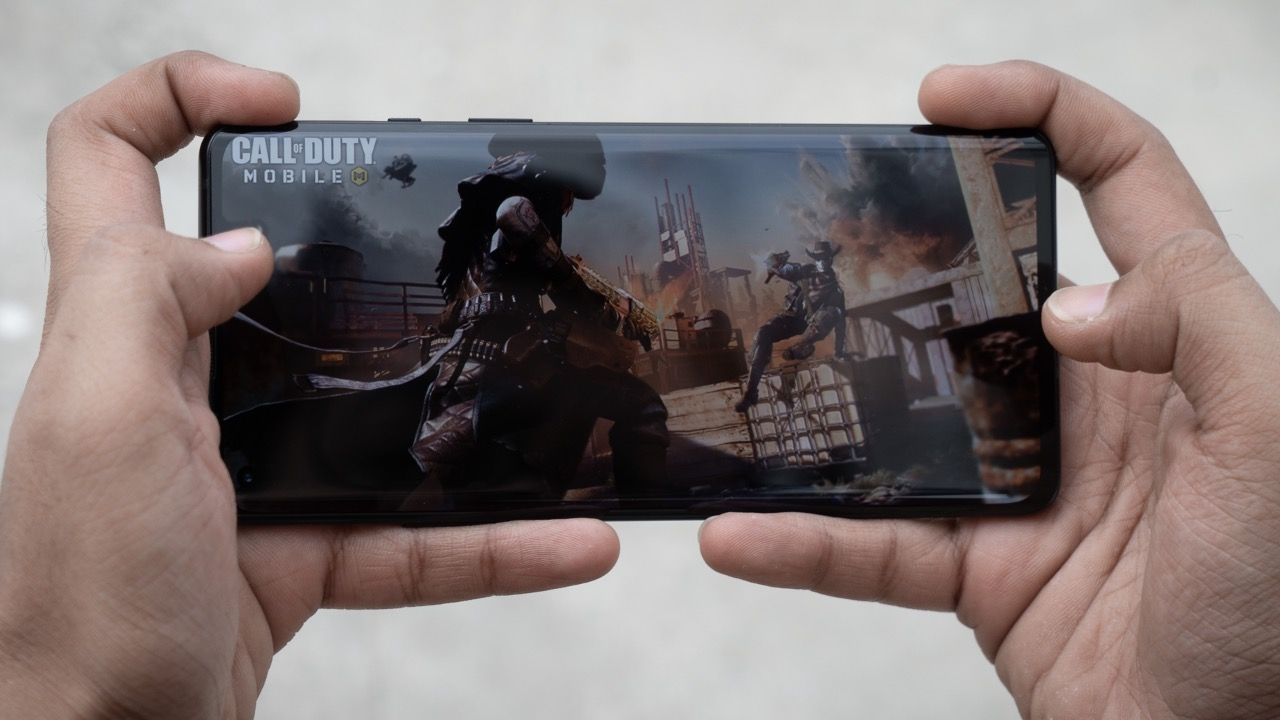 The OnePlus 8 just entered our test lab for review and we have been using it for close to 24 hours now. One of the first things we tried on the phone was playing games on it.

OnePlus 8 succeeds the OnePlus 7 which was announced last year and was followed by the OnePlus 7T later in November 2019. OnePlus phones have gained a reputation for providing one of the best Android experiences than any other smartphones and it achieves it by effectively optimising its hardware with its software, that is the OxygenOS. Moreover, the OnePlus 8 builds upon the previous generation by upgrading most features and brings it up to speed with the current developments in consumer technology space.

We tested the gaming performance of the OnePlus 8 and also pitted it against the iQOO 3 and Realme X50 Pro, the closest competitors. Here’s what we found out. 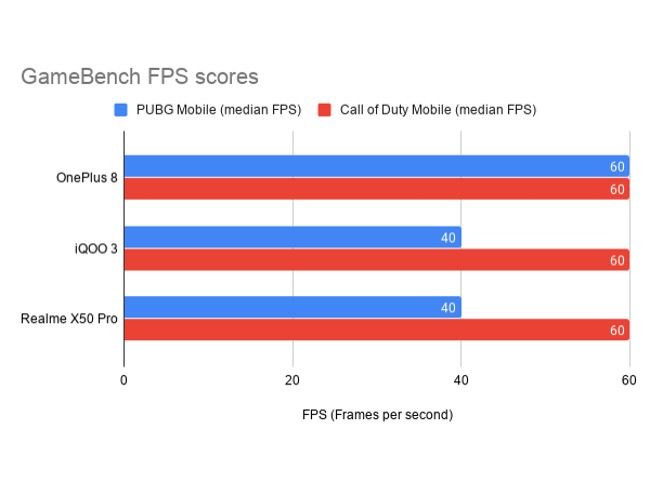 Testing the Gaming Performance of the OnePlus 8

OnePlus 8 packs in the top-of-the-line Qualcomm Snapdragon 865 chipset with inbuilt 5G modem, an octa-core CPU that is clocked at upto 2.84 GHz and Adreno 650 graphics processor. This is paired with upto 12GB of RAM and 256GB of internal storage that makes up the maxed-out variant, the one we have received for review.

The SoC onboard this phone is the most advanced processor for Android phones in the market yet as it is made on a 7nm fabrication process with a dedicated X55 5G modem, Snapdragon Elite gaming features and eight cores to drive home the robust performance that you’ve come to expect with a OnePlus phone.

The curved screen has a peak brightness of 1100 nits and is just great to look at. It’s vivid and produces punchy colours and the 90Hz high refresh rate takes care of ironing out animations, transitions and helps in giving that buttery smooth user experience that remains unmatched.

With the OnePlus 8 running on the latest Snapdragon chip under the hood, there’s no question of the chip to falter when running existing gaming titles. It does it all without breaking a sweat and it is a delight playing on the OnePlus 8.

For our brief test, we played a couple of rounds of PUBG Mobile, Call of Duty: Mobile, Forza Street and LifeAfter to get a sense of how the OnePlus 8, with all its might, performs when running some graphic-intensive titles. We recorded the performance metrics using GameBench. 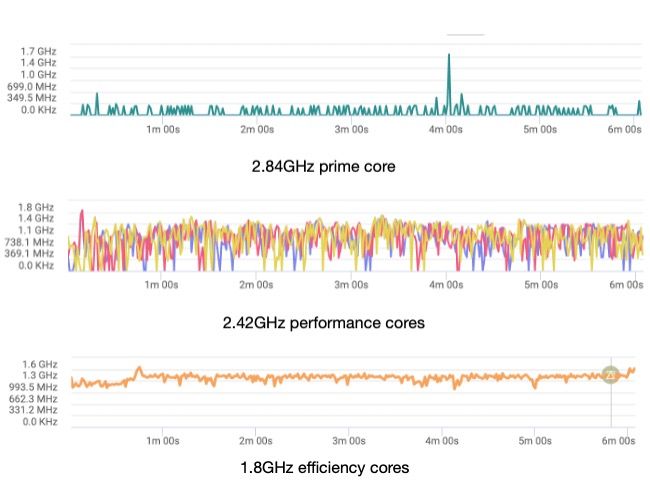 Interestingly, the prime core was rarely engaged as most of the processing was handled by the three performance cores with intermittent drops in frequency and four efficiency cores that were running at all times. Our gameplay experience remained smooth throughout with no noticeable frame drops and the GameBench data doesn’t show signs of thermal throttling. 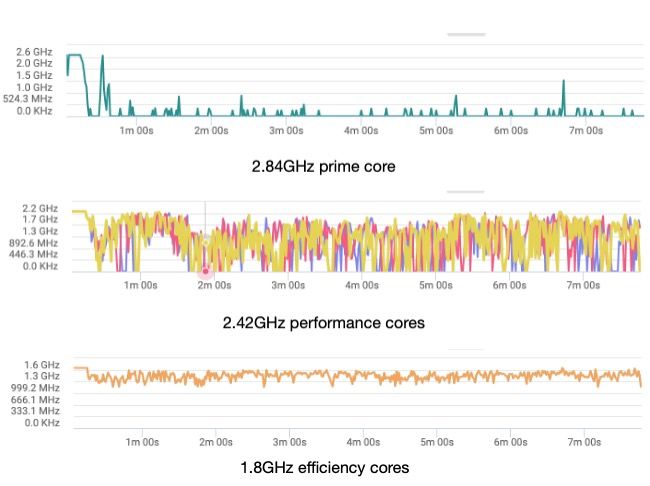 Next, we switched to PUBG Mobile with highest settings-- HDR graphics and extreme frame rates and the phone clocked in 60FPS with a 95 per cent stability. As per the recorded data, the prime core was rarely used and the maximum peak frequency during our gameplay was 2.6GHz. The performance cores were running at 2.2GHz while the efficiency cores were powering through at 1.6GHz. It’s a breeze to play PUBG Mobile on the OnePlus 8 with HDR enabled as the screen is certified for HDR10+ playback.

Forza Street is the new kid on the block and was a cakewalk for the OnePlus 8. GameBench recorded Forza Street running at 30FPS with 90 per cent stability. Do note that the game can go up to 30FPS only. Another graphics-intensive title, LifeAfter, which is a survival role-playing game clocked in 60FPS with 59 per cent stability. This was with the graphics and frame rate set to maximum and anti-aliasing enabled. The data we recorded shows that the prime core wasn’t engaged and the phone used performance cores intermittently and the game only relied on the efficiency cores during our gameplay.

How does the OnePlus 8 fare against the iQOO 3 and Realme X50 Pro? 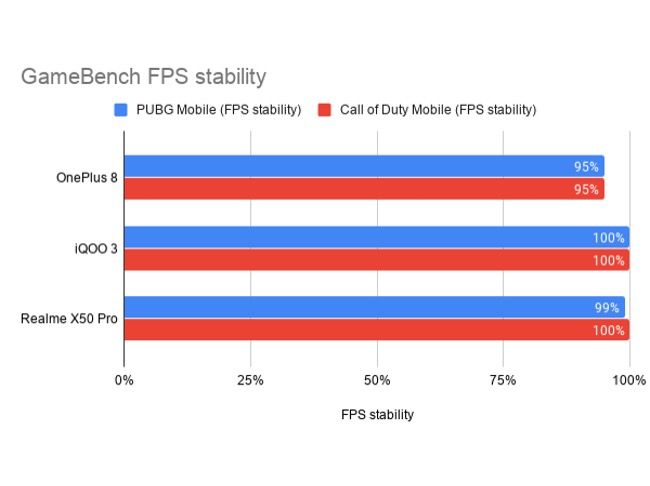 Here again, we used GameBench to record performance metrics to see how the OnePlus 8 performs against the iQOO 3 and Realme X50 Pro. We played a session each of PUBG Mobile and Call of Duty to see how well the three phones stand out when gaming. 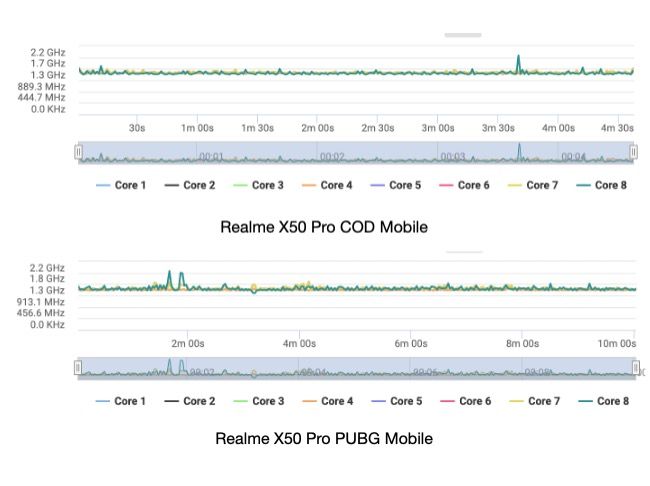 The Realme X50 Pro runs at 60FPS with 100 per cent stability and our session consumed 9.56 percent of CPU. As for the CPU cores, the prime core went up to 2.2GHz while the performance cores clocked 1.7GHz and efficiency cores running at 1.6GHz. One thing that we noticed about the core frequency use was that the X50 Pro fired up all of the eight cores during our session and remained constant throughout. 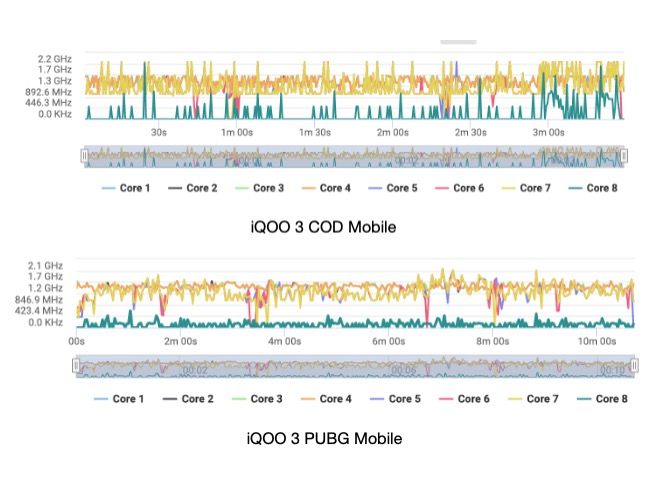 Similarly, the iQOO 3 clocked in 60FPS at 100% stability and used 9.62 per cent of CPU in this session. The prime CPU core was rarely fired up and went up to 2.2GHz at its peak while the performance cores clocked in 2.3GHz and the efficiency cores ran at up to 1.7GHz. Out of the eight cores, only seven were running at almost their full potential.

As for the OnePlus 8, as we’ve stated above, it was able to run Call of Duty Mobile at 60FPS with 95% stability and we didn’t witness any lags during our gameplay. Though the GameBench data shows us some frame drops when the player gets eliminated and kill cam is shown which is natural. Other than that, what we were able to see from the data recorded by GameBench was that the OnePlus 8 rarely fired up the prime core in between the gaming session as most of the processing was handled by the three performance cores with intermittent gaps and four efficiency cores.

Coming to PUBG Mobile, both the iQOO 3 and Realme X50 Pro clocked in 40FPS at 100% stability while the OnePlus 8 runs the game at 60FPS with 95 per cent stability. As we saw with the Gamebench data of COD Mobile, the iQOO 3 doesn’t fire up the prime core and the PUBG Mobile gameplay is handled by performance and efficiency cores during our session. On the other hand, PUBG Mobile on the X50 Pro uses all of the eight cores constantly running at 2.2GHz, 1.8GHz and 1.6GHz. Here again, the optimisations built into the X50 Pro seem to utilise all the resources but still doesn’t run-up to its full potential as is the case with OnePlus 8.

The OnePlus 8 is able to run PUBG Mobile at 60FPS with 95 per cent stability, wherein the phone uses the prime core rarely. The performance cores clocked in 2.2GHz while the efficiency cores were up constantly running at 1.6GHz.

Going by these numbers, we can deduce that the OnePlus 8 has better optimisation techniques under the hood that don’t require the use of the prime core as the rest of the seven cores can handle games adequately. This means that the OnePlus 8 has been tuned keeping in mind sustained performance that helps the phone in running smoothly in the long run.

Even though we played only a bunch of games for this brief test, Call of Duty Mobile and PUBG Mobile are fairly popular and demanding titles. The gaming performance of the OnePlus 8 speaks volumes about its calibre in blazing past any and every gaming titles present on the Play Store. The most important thing when playing any game is to have an enjoyable experience and that isn’t entirely possible every time as most phones aren’t well-optimised to translate sheer raw power into a great gaming experience. OnePlus 8, however, is the closest we will get to experience a lag-free, smooth and enjoyable gaming experience.

We’ll be testing out the OnePlus 8 in detail for our full review so stay tuned for that.

Disclaimer: When we tested the iQOO 3 and Realme X50 Pro, both the phones maxed-out at 40FPS while running PUBG Mobile at HDR graphics. We will be performing a second round of test and will update the scores accordingly.