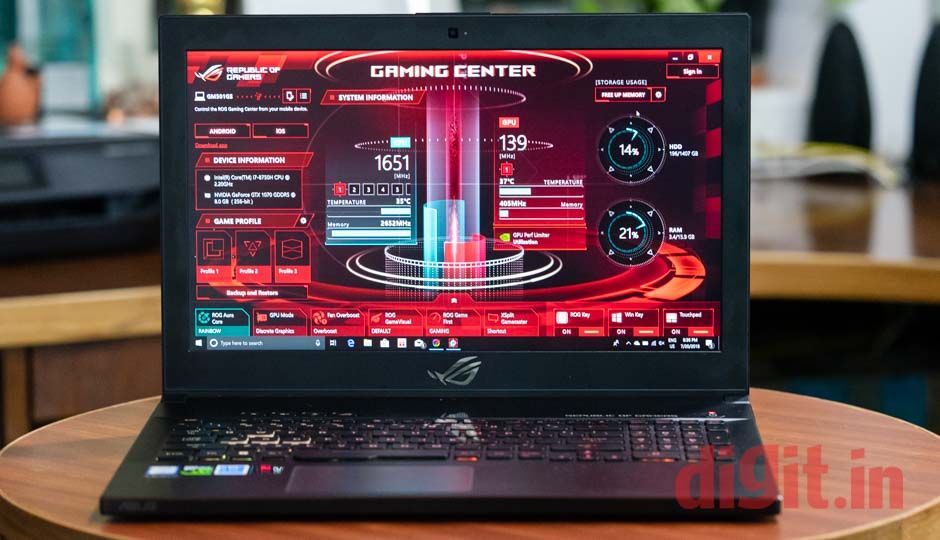 Gaming laptops have traditionally always been seen as bulky and heavy, with a design language that was more synonymous with “beast” than “beauty.” However, as time has gone by, not only have components become more powerful, but also better at withstanding heat. However, clever engineering has allowed companies to pack extremely powerful hardware into laptops less than an inch thick. The Asus ROG Zephyrus M is one such laptop, employing nifty design tricks that allowed Asus to throw in the eighth generation Intel Core i7 processor mated to a Nvidia GTX 1070. We’ve had some time to spend with the Asus ROG Zephyrus M and here are our first impressions of this machine.

Design and Build
When I unboxed the Asus ROG Zephyrus M, the packaging itself was pretty impressive. Of course, when you’re buying a laptop this special (and expensive) every aspect of the experience matters. After unboxing the machine, I was a little surprised at how thin the Zephyrus M was. I use an Asus ROG Strix GL503, which isn’t the thinnest laptop around, so when I picked the Zephyrus M out of the box, I was completely surprised by its less-than-1-inch-thickness. What also caught me off guard was its heft. When we think of thin laptops, we automatically associate it with light. The Zephyrus M may be thin, but it is in no way a light laptop. The reason for this is probably the fact that it's built out of solid aluminium, with the body having very little flex, whether it's on the keyboard island of the lid. 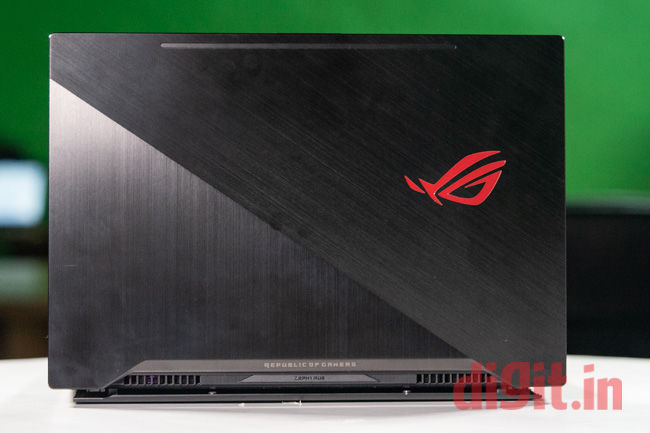 Overall, the design of the Zephyrus M is classic ROG. It has the usual sharp looking lines and clean cut edges. It has the menacing ROG symbol (which lights up red) and there’s also the raising hinge at the back which creates a vent when the lid is opened. There’s, of course, LED lights in there as well because we gamers love our LEDs and we ESPECIALLY love RGB everything. There’s very little to consider wrong with the build and design quality of the Asus ROG Zephyrus M, but if I had to point at something, I’d point at the laptop tipping the weighing the scales at roughly 2.2 kilograms.

Gaming
The Asus ROG Zephyrus M unit I’ve got under my fingers right now comes with an 8th generation Intel Core i7-8750H processor, 16GB of DDR4 RAM, a 512GB NVMe SSD along with a traditional 5400rpm 1TB hard drive. Graphics duties are performed by a Nvidia GTX 1070 which replaces the GTX 1080 Max-Q that was present on the Zephyrus. There’s a full HD IPS display with Nvidia G-Sync support, so gaming is supposed to be nothing short of stellar on this machine. I managed to play Doom on the machine for about half an hour on the laptop and I walked away feeling like this is a machine I must own and here’s why. 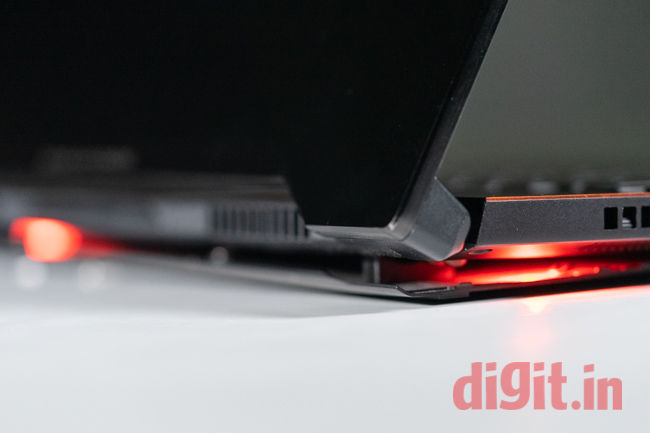 For starters, the game loaded faster on the Zephyrus M than it does on my Xbox One. I was in the map, shooting up demons without a single frame drop or tear, and this is with the game’s video settings set to ultra. The game was running in 1920x1080p resolution. During the time, the Zephyrus M’s fans kicked into overboost mode as they become clearly audible. Interestingly, the area where the WASD keys reside was releasing cool air and the keyboard didn’t get throughout the time I used the laptop. The area above the keyboard did heat up to 50 degrees at one point and Asus Gaming Center said the CPU was hitting 96 degrees, but at no point did the heating become an issue, either for the system or for me as the user. The bottom of the laptop didn’t feel too warm either, possibly thanks to the bottom-lift design. 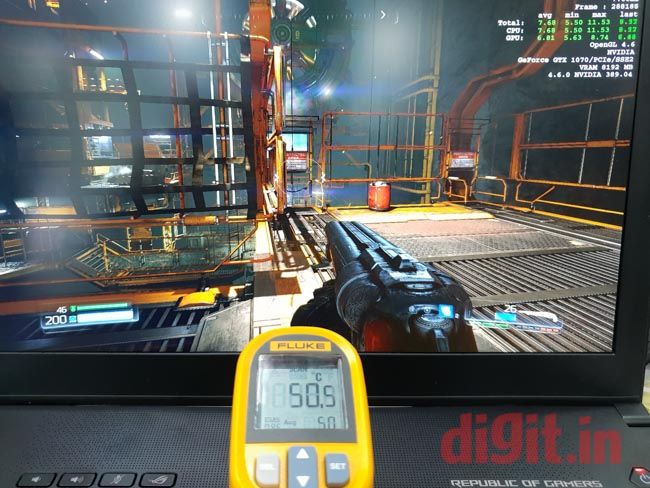 Keyboard and Trackpad
Last year’s Zephyrus (Review) was also a thin gaming laptop, but Asus tried to do things radically different from that one. There was unnecessary space above the keyboard and the trackpad was off to the extreme right doubling up as the num-pad. With the Zephyrus M, Asus has gone back to a more traditional design, with the standard layout. The space above the keyboard has greatly reduced, allowing the trackpad to move back to its usual spot. You may initially think that there are speakers under this part of the laptop, but its actually an array of holes through which the fans pull in cool air. This also means that there is now a regular num-pad on the right, which is great. Booting the laptop up treated me to the usual RGB Rainbow mix of pulsating colours on the keyboard. There are more customisation options available in the Aura Sync on the Zephyrus M than there are on the Strix I am using right now with the ability to fine-tune most aspects such as pace, intensity and even zone-based lighting setups. The key travel felt a little shorter than that found on normal gaming laptops, feeling more like chiclet-style keys than "gaming keys." Regardless, in the short time playing Doom, the keys felt responsive enough, but whether they're ideal for long hours of gaming is something we'll only know once the Zephyrus M has gone through our rigorous testing process. 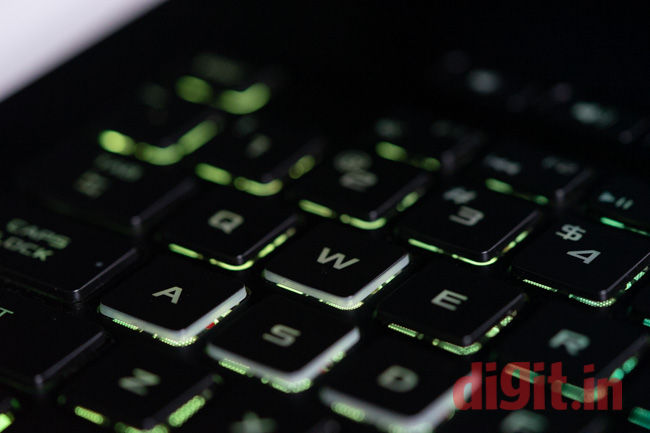 Ports and Connectivity
One of the nicer things about gaming laptops is that they come with all sorts of ports because gamers like everything wired. The Zephyrus M leaves very little out in this regard. There are three USB 3.1 Gen 2 ports on the left side of the laptop nestled right next to the HDMI 2.0 port. The HDMI port supports a maximum output resolution of 4K at 60Hz which is awesome if you're looking to game on a bigger/higher resolution screen. Lastly, the left side also has the unified headphone-microphone jack along with the charging port. On the right side, you would find a solitary USB 3.1 Gen 2 port along with a singular USB Type-C Gen 2 port. Unfortunately, there is no SD card or microSD card reader on this machine. In terms of connectivity, the ROG Zephyrus M is pretty loaded, offering plenty of ports to not only connect gaming peripherals but also to charge your phone and even plug in an external hard drive or two. 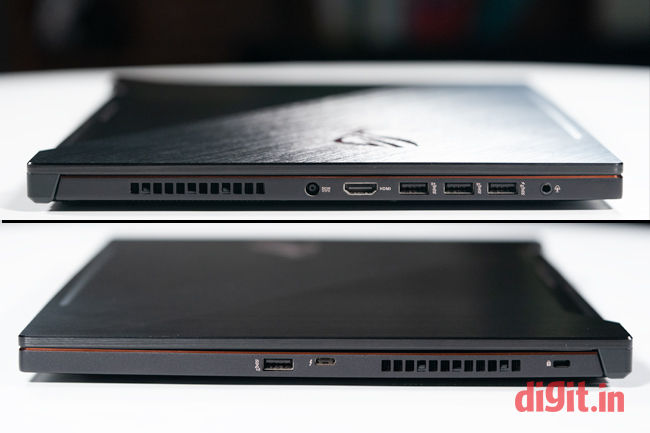 First Impressions
The Asus ROG Zephyrus M is definitely one of the nicer looking gaming machines in the market right now. Of course, the definition of nice is relative, but if you’re looking for a machine that will turn heads both at LAN parties and board-room presentations alike, the Zephyrus M is definitely a worthy candidate. This is, of course, assuming you need a gaming machine that meets not just the graphics intensive demands, but also your aesthetic needs. The keys have decent travel, the RGB lighting is wonderful and the matte display is definitely going to eliminate all the annoying glare from bright ceiling lights. Of course, this is just a first impression and it is immensely positive, even if the machine costs Rs. 1,99,990, however, whether it's actually worth its lofty price tag is something we’re going to have to discuss in our in-depth review of the Asus ROG Zephyrus M.