Micromax A116 Canvas HD vs. Galaxy Note II: Half the price, double the value? 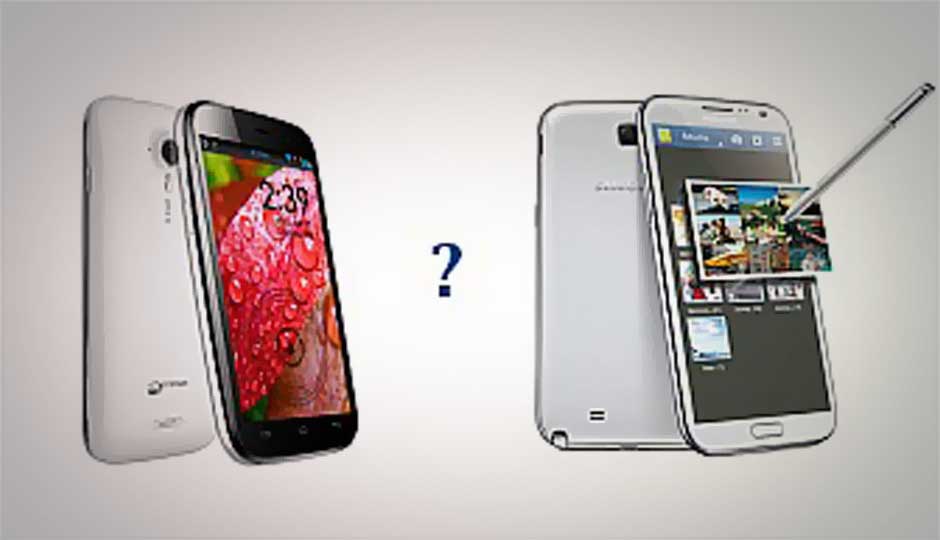 Micromax managed to stir up quite a bit of interest yesterday when they unveiled the A116 Canvas HD, a “phablet” with a five inch display and a quad-core processor. Naturally, it drew immediate comparisons with the current reigning king of the large screened handsets - the Samsung Galaxy Note II. The Galaxy phone boasts of similar specs but also of a much higher price-point- it's currently selling for about Rs. 37,000.

Let's take a quick look at how the two phones stack up against each other:

1. Under the hood: Both the Canvas HD and the Galaxy Note II are powered by quad core processors - a 1.2GHz Cortex A7 on a MediaTek MT6589 chipset in the former and a 1.6GHz Cortex A9 on an Exynos 4412 chipset in the latter. It's worth pointing out here that although both processors may seem similar, the Exynos 4412 powers a bunch of premium, high performance devices such as the Galaxy S3 and the Galaxy Tab 10.1, the MediaTek SoC is currently only being used in budget phones.

2. Display: At 5.5 inches, the Galaxy Note 2 has a slightly larger display than the Canvas HD- 0.5 inch larger, to be precise. However, both displays offer a resolution of 1280x720 pixels, which means that the Canvas HD, with its slightly smaller display, offers a higher pixels per inch (ppi) count than the Note 2. The Samsung's display uses Super AMOLED display that leads to lower power consumption and more vibrant colours. The Canvas HD's IPS display means high brightness, better viewing angles, and sharper and more readable text.

3. Battery: The Canvas HD has a 2100mAh battery while the Galaxy Note 2 has a 3100mAh battery. Couple that with the AMOLED display and it seems evident that the Samsung phone will be able to last longer on a single charge.

4. Price: This is where the Micromax Canvas HD pulls ahead of the Galaxy Note 2. The Galaxy is currently priced at about Rs. 38,000 while the Canvas HD is expected to cost below Rs. 15,000. If value for money is the primary deciding factor for a user, the Canvas HD does appear to be a much better deal, especially when you consider that it also lets you slot in two SIM cards.

The Micromax A116 Canvas HD can be compared to the smaller 4.8-inch Samsung Galaxy S III as well, which once again sports quad-core specs, and no S Pen stylus functionality.

We hope to get our hands on the Micromax Canvas HD soon for a much more exhaustive analysis. In the meanwhile, do check out our first impressions of the device, here.