Everything you need to know about TN Panel displays Even though they have become very rare nowadays, most of us have seen a Cathode Ray Tube (CRT) display, either as a television set or as the monitor for a personal computer. They were massive, difficult to move and plug (Anyone who has ever tried to connect a VCR/DVD/Video Game player to a CRT TV can vouch for the gymnastics involved). Hence, it was no surprise when even after ruling the display market since their commercial launch in the 1930’s, they disappeared quickly when a new piece of technology made the much slimmer and better looking LCD displays practical. That technology is the Twisted Nematic Field effect, or simply put, TN effect.

A majority of the displays sold currently are TN displays. It is no surprise, given that it is one of the cheapest type of displays to produce and has a very low response time because of its ability to change state faster than any other LCD technology in the market. It is due to this ability, that TN displays are chosen by those in the gaming profession.

Compared to its predecessor, LCDs in the form of TN displays are better in almost every aspect. To begin with, they were almost 90 percent slimmer and almost 10 kg lighter on an average than their bulky CRT counterparts. The displays on LCDs are truly flat compared to the curvature necessary on CRTs. Since there is not a major need for thick outer frames, LCDs offer a much better screen size with respect to total size as compared to CRTs.

On an environmental level, CRTs are much more harmful than TN LCD displays, due to the comparatively more radiation emitted and almost 200 percent electricity consumed as compared to LCDs. Even the display quality is prey to glare and lack of sharpness for CRT displays whereas both effects are barely felt in LCDs, not to mention the immense heating problem.

How does a TN display work?

The underlying principle in a TN display is that of polarized light. Any display is made of pixels. In case of an LCD display, each of these pixels is typically a liquid molecule layer between two transparent electrodes and two polarizing light filters set perpendicular to each other. In its uncharged state, the light incoming through the first filter cannot pass through the second filter due to the different orientations of the polarizing filter. When a low voltage is applied to the molecules, the orientation is changed to bend the light between the two filters to match the orientation of the second filter as well. If the orientation is completely changed then the light is passed unfiltered. By varying the voltage applied, various levels of intensity can be achieved. 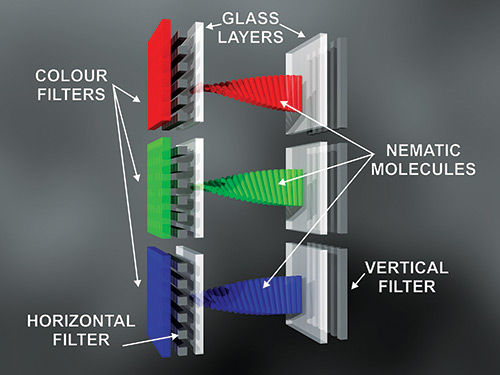 A small section of a typical color TN panel. Notice the nematic molecules
which bend the light between the filters.

At this level, the technology is good for small scale electronics like calculators and digital wrist watches. But to be potentially useful for larger displays like that of televisions and computers, the technology was improved to be able to handle colour filtration instead of just dealing with white light. Now, along with filtering the amount of light passing through, each pixel could also use its orientation to define the colour being displayed on the screen.

One of the major milestones in TN technology was Super Twisted Nematic Displays, or STNs. Standard TN displays didn’t have much of a difference between the ON and the OFF thresholds for the pixels, due to the low angle of 90 degrees between the two states. In the mid 1980’s, STN displays were invented which solved this problem by allowing the light director to rotate through an angle of 270 degrees.

On a smaller display, like those in calculators and watches, to control each segment voltage can be directly applied to it through a direct connection. But for any larger displays, this would mean millions of connections to cover all the pixels. To resolve this, pixels are addressable with rows and columns, bringing down the connections from millions to thousands. To control each pixel on the display, the display needs to use a multiplexed scheme of addressing that can deal with a large number of pixels at the same time. The lower difference between the ON and OFF voltage of the STN made this possible. To further reduce undesirable coloration due to a shifted transmission spectrum, Double STN, or D-STN was implemented. As the name sounds, it consisted of two STN layers in a single cell with opposite twists to each other to negate undesirable phase shifts in the light. 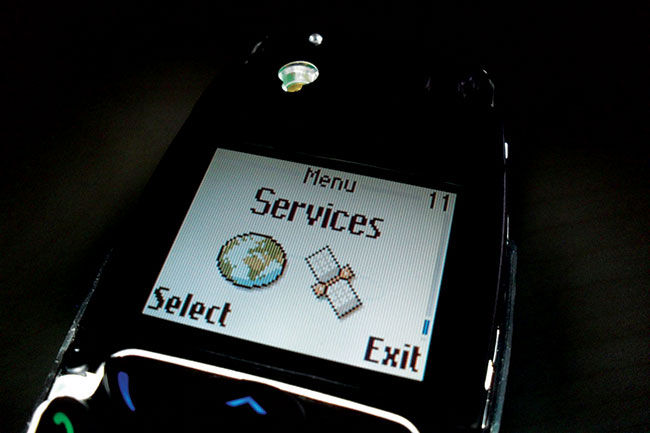 Another type of STN display was the CSTN, or the Color Super Twisted Nematic Display, originally developed by Sharp Electronics. The CSTN used colour filters for red, green and blue colours to be displayed. Even though in its earlier years CSTN suffered from slower response times and ghosting, recent advancements in the technology allow a 100 ms response time, 140 degree viewing angle and high quality colour reproduction rivalling that of a TFT display – all at about half the cost.

A few other types of STN displays are:

What is a TN TFT

As we know by now, the orientation of the crystals in the TN display is controlled by electric charge. TFT, or Thin-Film Transistor technology puts transistors to use to control the row-column addressing of pixels with much greater precision. Each row and column has a designated transistor and each pixel is a capacitor with insulating liquid crystal between two layers of transparent conductive Indium Tin Oxide layers. They are controlled via transistor switches, one for each pixel. Like the previous technology, this too used a multiplexed addressing system. 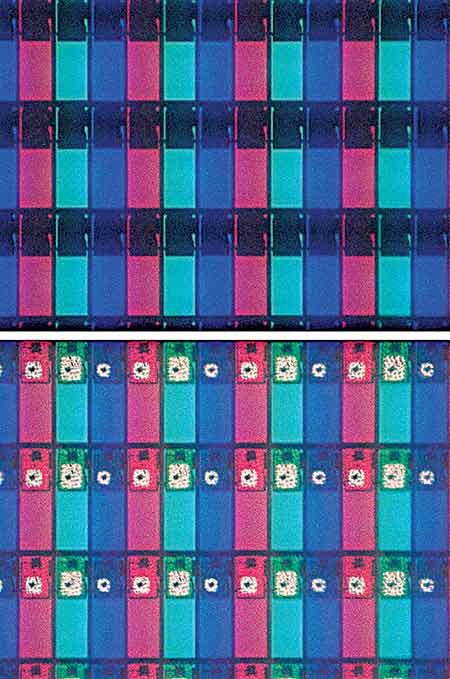 A TN TFT under a microscope. The transistors can be seen at the edges.

Low Production cost – The basic form of TN displays do not require complex components like transistors or advanced filters, this is why the production cost is so low, though this does affect its abilities compared to other technologies.

Faster response time – Due to its reduced complexity compared to other display technologies like IPS and VA, the TN displays can change state very quickly and thus are highly preferred by gamers as response time is paramount in gaming, especially online gaming. The introduction of Response Time Compensation (overdrive) drove down the response time even lower and now some TN displays can support true 120+ Hz refresh rates.

Comparatively poor colour reproduction – As mentioned earlier, TN panels use 6-bits per RGB colour, that is 18 bits in total and are unable to display 24-bit true colour that is received from graphics cards. Instead, TN displays use a 24-bit dithering process that which can be either special (combines adjacent pixels to produce the desired colour shade) or temporal (cycles between different shades to simulate intermediate shade). Both tend to make the individual pixels visible.

Narrow Viewing angles - Compared to more expensive displays, TN panels fall short in the department of viewing angles. It doesn’t take much effort to see the screen discolour. It just has to be viewed from a sufficiently steep angle. For example, viewing the picture from below can make the image appear quite dark and the opposite effect is achieved if you try to view the display from the top.

Apple Store Online in India has announced festive offers, and a lot more: Know what they are here
Google rolls out tool to let people remove personal info directly in Search
Here is a report on the state of Make in India manufacturing of phones, tablets, wearables, and earphones
India ramping up semiconductor manufacturing allegedly leaves a dent in China’s chip output: Details
Flipkart and eDAO has in store a 'Digital Treasure Hunt' ahead of The Big Billion Days: Here's what it is
Advertisements