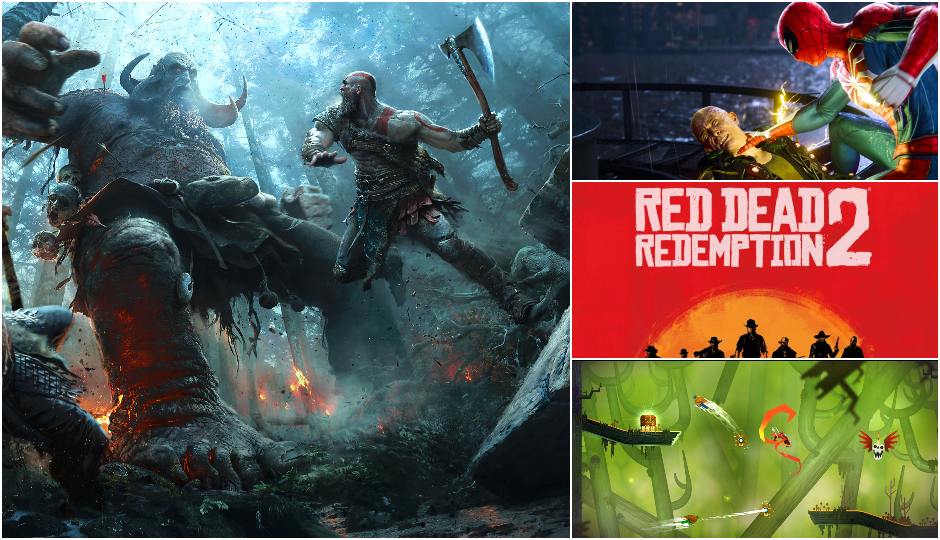 In 2018, not only have we seen the launch of a bunch of PS4 exclusives but also a long list of third part games that will ensure you spend a lot of time playing indoors.

If you are one that has a PS4 then 2018 has been a great year for you. Not only have we seen the release of console exclusives, but also a lot of third-party games ensuring you have a large library of games to chose from and different genres to enjoy. There are way too many games that we enjoyed so this list is going to be 10 games you absolutely must play if you own a PS4 or a PS4 Pro. Just to clarify, this list is in no particular order.

Calling this PS4 exclusive one of the most anticipated games of the year would be an understatement. Even since its reveal in 2016, fans were divided if this soft reboot was the right direction for Kratos. We are happy to tell you that yes, it is. God of War brings with it the perfect blend of story telling, gorgeous visuals and breath-taking action. Needless to say that the no cut camera in the game is a technical achievement.

Yet another PS4 exclusive Marvel’s Spider-Man is yet another game that breaks the curse of bad super hero games. This is developer Insomniac Games own story for the web head and it isn’t an origin story. Much like Rocksteady’s take on the Dark Knight, Marvel’s Spider-Man takes a look at Peter Parkers life a few years after he has become Spider-Man. The story of the game is a unique take on the webslingers universe, the gameplay is addictive and the graphics look stunning. Needless to say that swinging around the city just for fun is one thing you can do for hours on end.

I Robot meets Westworld is the best way to describe Detroit: Become Human. The game focuses only on story bringing with it photorealistic visuals. You don the role of three different Androids whose stories intersect with each other. The gameplay of Detroit: Become Human is simple but is the choices that you make in the story that will determine the outcome. This is yet another PS4 exclusive worth checking out for the visuals.

Yet another game that’s one of the most anticipated of 2018 is Red Dead Redemption 2. The game looks stunning no matter the console you play it on, has content enough to last you more than 50 hours of gameplay and that’s not counting the online mode. The mechanics of the game are quite similar to its predecessor keeping things familiar for Oldtimers and keeping things interesting for newcomers to the franchise. The game’s story is intriguing, gameplay may take a while to learn and the visuals make you question the need for a new console generation.

If you want to take on the role of a hunter and hunt some fantastic creatures straight out of a fantasy novel, then Monster Hunter World is one to check out. The game has deep RPG elements, a host of weapons to chose from and a rich world to explore.

If combat racing is your thing, then Onrush is definitely worth checking out. put simply, Onrush is the love child of the Burnout and Motorstorm franchise. The game has frantic races through challenging environments coupled with stylish takedowns.

Taking you back to Ancient Greece, Assassins Creed Odyssey builds on the foundation of Assassins Creed Origins and brings with it improvements to combat. The franchise has moved to a more RPG focused game giving you the option to chose between a male and a female protagonist this time around and bringing along with branching stories and choices giving you control over the final outcome.

Sure, on the PC Battlefield V shows off the capabilities of ray tracing, but the game is no slouch on the consoles. Building on the foundation and success of Battlefield 1 this new entry in the franchise brings with it a battle royale mode for those interested. The single player campaign puts you in the shoes of different individuals during war to widen your perspective.

Bringing back the nostalgia of couch co-op gaming, A Way Out is a 2 player game only with no single player option available. You can either play local or online but the game will always show you both the perspectives. A really good thing is that you and your friend both don’t need to own a copy of the game to play. If you own a copy, you can invite your friend to partake in the game with you. This prison break story is one reserved for the best of friends.

Our favourite luchador is back to save the day in Guacamelee! 2. The story of this side scrolling action adventure game as silly as its predecessor with the Mexiverse being in trouble this time around. Our hero must travel to a parallel dimension to save the Mexiverse. Just like the first game, you will get a bunch of powers and abilities throughout the game enabling you to pull-off complex traversal moves and insane combat combos.

New SIM for 5G in India? Will existing 4G SIM from Jio, Airtel, and Vi work in a 5G phone? Previous Post
What is algorithmic anxiety and why it's probably good for you Next Post