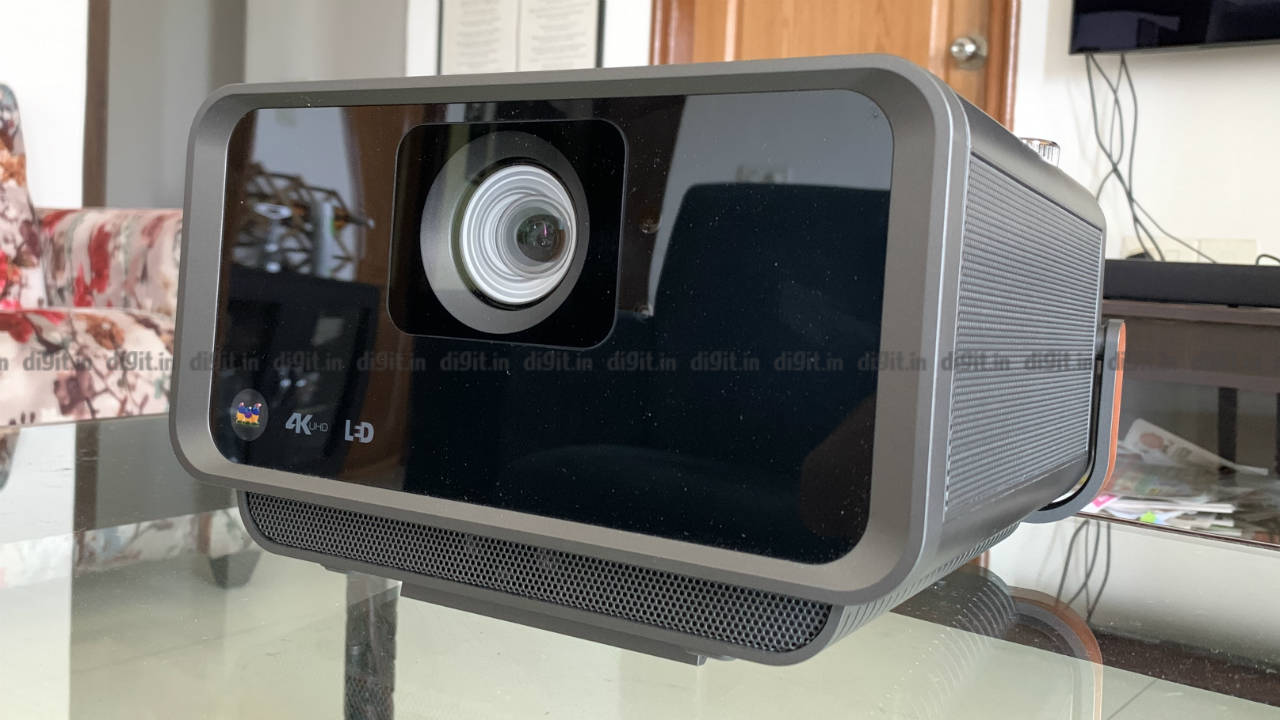 There is some pleasure to be had in building a 4K home theatre with multiple speakers and a large screen projector. Then you decide to take a road trip, only to wish you had a portable projector with you to entertain yourself. While we have seen projectors like the Viewsonic M1 (review) and the Rayo i5 (review), they offer an extremely compact form factor and resolution that isn't even 720p. What we have with us today is the ViewSonic X10. While its form factor wouldn't necessarily peg it in the portable projector category, it does have features that will let you carry it with you on the go. It also brings with it highlights like working as a Bluetooth speaker and also comes with Wi-Fi support. It has a built-in app store as well. Considering the ViewSonic X10 is a 4K projector with HDR 10 support, is this the ideal device for you to take with you on an outdoor adventure and double up as your home theatre projector? Let's find out!

ViewSonic X10 Specifications at a glance

Speaking of the build of the ViewSonic X10 projector, it is extremely well built. You have a mesh grill on either side which houses the speaker driver. The top of the projector has a gunmetal finish on it. The front of the projector has the lens with a protective glass on top of it. This means that even if you touch the area with the lens, you will only touch the protective glass on top. This has its own advantages and disadvantages. The advantage is that you don't need to worry about a lens cap when moving the projector. The downside is you better keep cleaning this protective glass. If it gets scratched or smudged, you may have a problem. 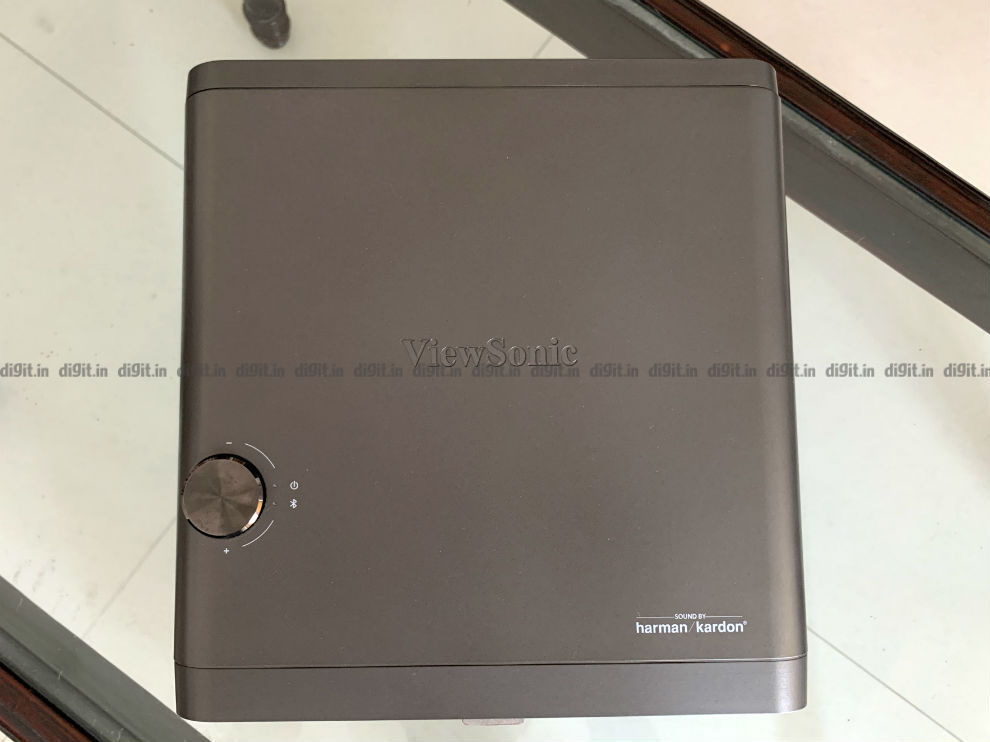 Even though the top has this gunmetal finish to it there is a small dial to control the volume. There is also an indicator for power and Bluetooth. At the bottom, there are 4 rubber feet to hold the projector in place and a small flap to adjust the height. Because of the portability of the projector, I wish the tilt had more layers of adjustment. This would make it extremely convenient to place the projector on a table and not worry about adjusting the height. Thankfully, the one-stop for tilt adjustment was enough for me to get a good viewing angle on the projector. 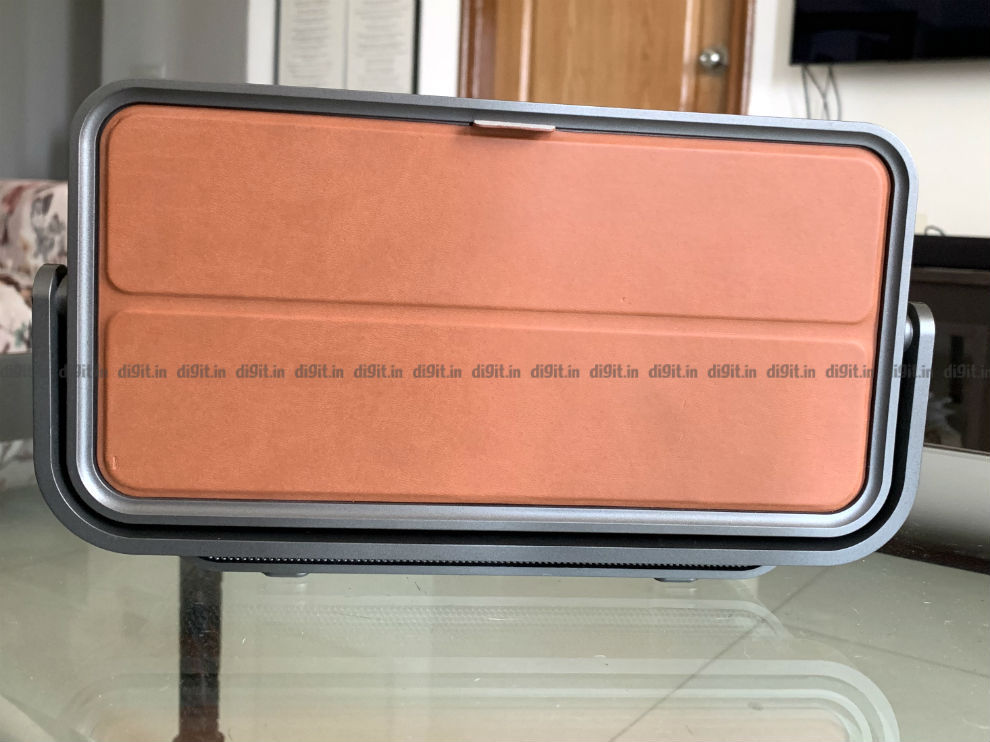 What's very interesting about the ViewSonic X10 is the placement of the ports. At the back, we have a magnetic cover which looks identical to the smart cover found on the iPad. It clips on magnetically, just like the smart cover does on the iPad. This is nice as it keeps the ports covered and protected. Speaking of the connectivity options, we have the power port, a housing for the Wi-Fi dongle, optical audio out, 3.5mm audio out, 3.5mm audio in, two HDMI ports with HDCP 2.2, one USB-C port, a micro SD slot, LAN port and two USB-A ports one of which is USB 3. There is also a Kensington lock here. The ports are plentiful and conveniently laid out.

There is no zoom ring or a focus ring on the projector. You can manually adjust the focus from the settings. The lack of zoom may be a bummer to some as it does help adjust to the size of your screen or wall without physically moving the projector. In this case, you will have to move the projector physically.

Overall, the projector has a unique build and design to it and that's also because it's meant to be portable. Not portable that you take it everywhere you go like the Viewsonic M1, but portable enough to carry with you for that week-long getaway. It is quite big to be portable in the traditional sense of the word and weighs 4.1 kgs. It isn't as big as the BenQ W5700 (review) and isn't as compact as the BenQ W1700 (review) either. 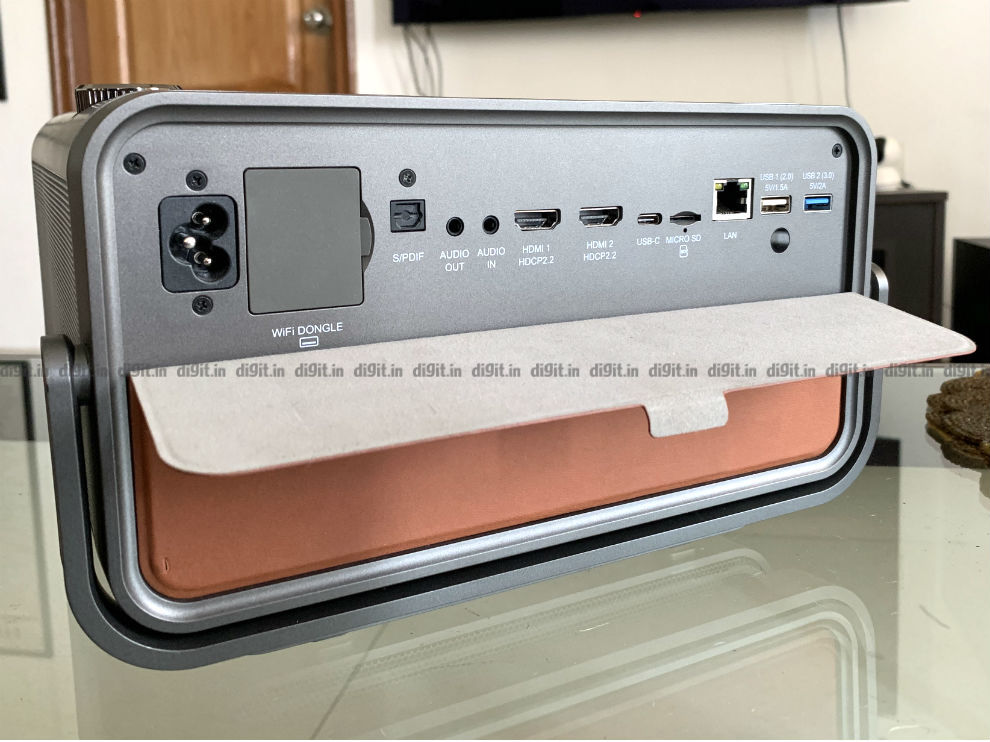 The projector also comes with a remote control. The remote control has backlighting and the backlighting is subtle, only highlighting the buttons enough for you to make out what button you are pressing. At the center, there is a circular wheel which can be turned to adjust settings or you could simply use it as a traditional directional button. There is also a physical toggle for the volume on the remote control. Not a volume rocker, but a traditional toggle and I'm enjoying it. Overall, the buttons on the remote are clicky, the subtle backlighting is a thoughtful touch and it responds well. 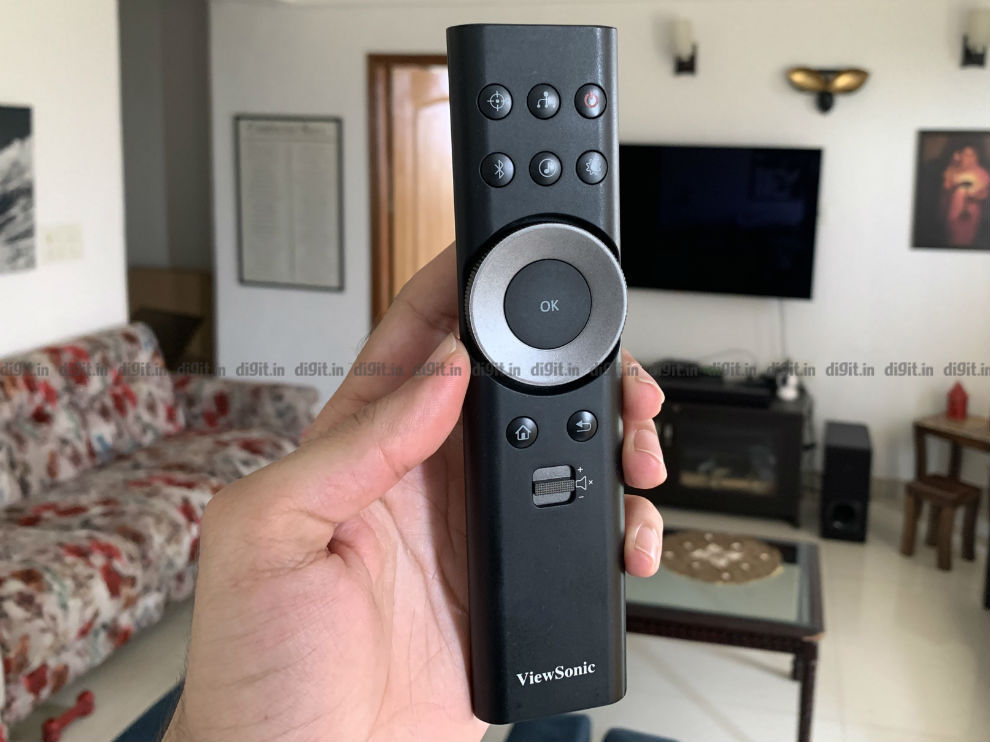 The UI is quite functional and if like us, you're not a fan of the Aptoide app store, then you will do better to keep a Fire TV Stick plugged into the projector if you intend on using it on the go. Since it has 2 HDMI ports, you have enough options to connect it to a streaming device and to your primary home theatre setup.

Before we get into the performance of the projector, we have a few specs and features to run through. Firstly, the projector can display a resolution of 4K and it also supports HDR. The projector claims to feature 125% of Rec.709 colour accuracy.

Our source of content for this projector was the 4K enabled Fire TV stick and an Xbox One X. The projector boasts of 4K resolution with HDR support. It doesn’t, however, support Dolby Vision which at this price point is disappointing. This projector truly shines when you have a completely dark room and a pair of speakers that can bring the house down. However, the projector is bright enough to let you watch content in a fairly bright room. In our case, we drew the curtains but there was a fair bit of light still coming into the room. 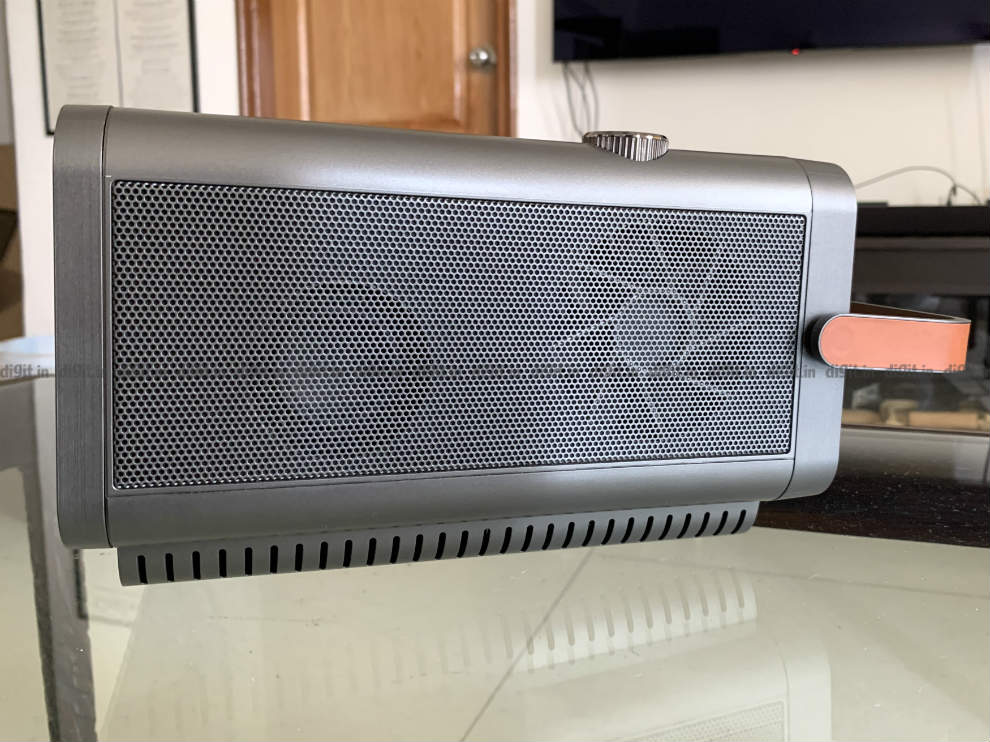 Action sequences from movies like the Dark Knight or John Wick which have fight scenes in the dark can get a tad washed out if there is room in the light. However, TV shows like Friends, Young Sheldon and more which have a bright vibrant colour palette from the get-go can be enjoyed even when there is light in the room.

When the sun goes down, is when the projector really shines. We watched a bunch of movies and shows like Spider-Man Homecoming, The Matrix, Grand Tour, The Boys and more and it was all an enjoyable experience. For the most part, we used the built-in Harman Kardon speakers. The speakers have an output of 16W and we had to keep the volume at 90%. While dialogue is clearly audible, it is the rest of the sound effects that left me wanting more. The background score is easily distinguishable from the dialogues but it is the bass which is quite lacking from the projector. It's safe to say that for personal viewing with just 2 or 3 people sitting around the projector, you should do fine, but for a more immersive experience, you may want to connect this to a soundbar or home theatre.

Coming to the picture quality, it really is quite good. From watching a bunch of YouTube videos to a lot of content of streaming services, the experience was largely enjoyable. The only downside is that HDR content didn't feel as punchy as it did on an OLED TV which can be a tad disappointing especially when you consider the price of the projector.

We blew up the projector to a little over 80 inches from about 3 feet away which lends to its short-throw nature to get a large picture. 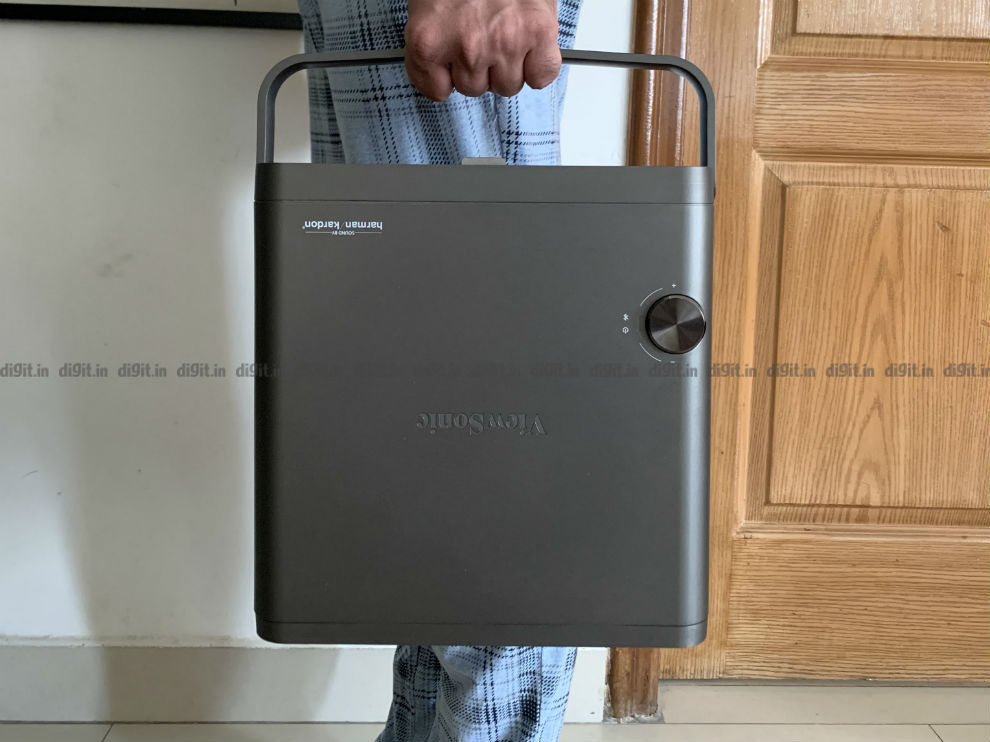 Overall, the picture was clear, the autofocus of the projector works well to make the image look sharp. The only place where we felt the picture performance could have been better was with gaming. We played A Plague Tale: Innocence, Gears 5 and Doom Eternal on the Xbox One X connected to the projector and the HDR colours seemed to be a bit off. In the case of A Plague Tale: Innocence it was a tad brighter while Doom: Eternal felt darker than it should. You can achieve a better picture setting by tinkering with the settings but out of the box, for these games, the settings felt off.

Another thing to note, and this could be because of the larger than life size, is the fact that I felt there was considerable input lag. Especially in a game like Doom Eternal where you have to be on your toes throughout each battle, I felt the response of what's happening on screen was a tad slower than my inputs. For a game like A Plague Tale: Innocence where it is more a cinematic visual experience, the controls worked fine. Needless to say, you won't be doing competitive gaming on this projector. 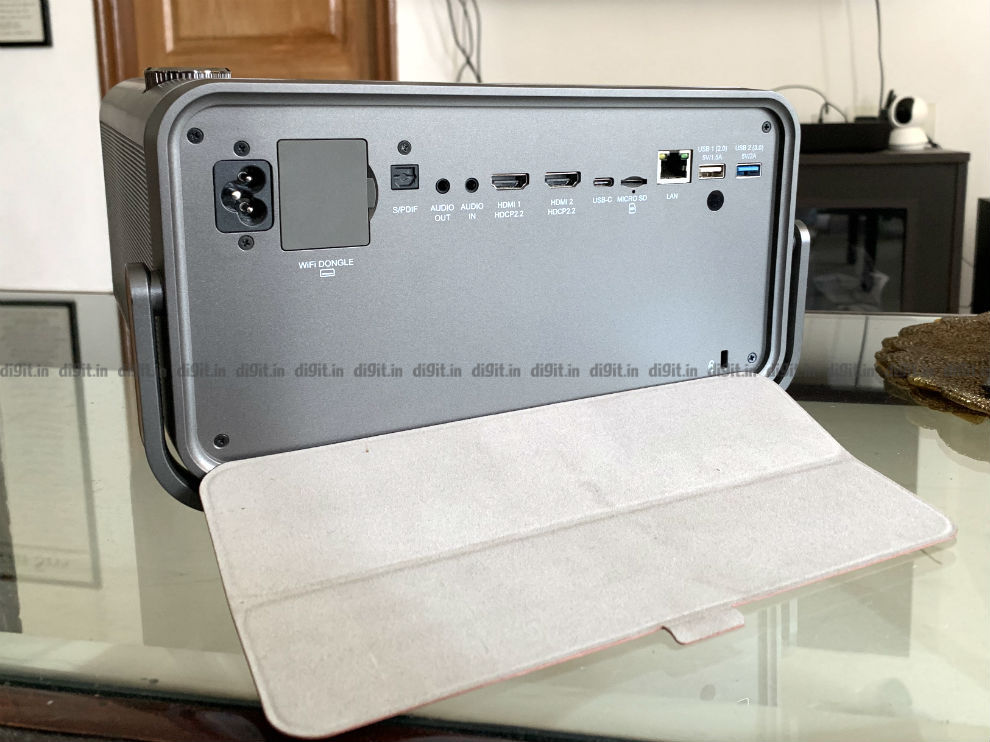 If you are looking for a projector for your home theatre, there are plenty of options to choose from, especially when you consider the Rs 3,50,000 price point of the Viewsonic X10. Some of those projectors even bring better HDR performance for the price. However, this projector is also aimed at offering portability and we haven't yet seen a portable projector bring with it support for 4K, HDR along with Wi-Fi and Bluetooth support. Not to mention the sturdy build making it easy and reliable to take this projector on a family trip.

Look at it this way - if you want a projector to be tied to your home theatre setup, then for this price there are better options. But if you want a high-end projector to take with you to a friend's house to enjoy sports, or to take with you to your holiday home, or if you have a backyard setup for watching movies under a starry night, then this projector has a lot of conveniences worth checking out. The autofocus, keystone adjustments and simple plug and play setup make it a great high-end option on the go. We only wish it had more options for the tilt to get that perfect angle under the screen.