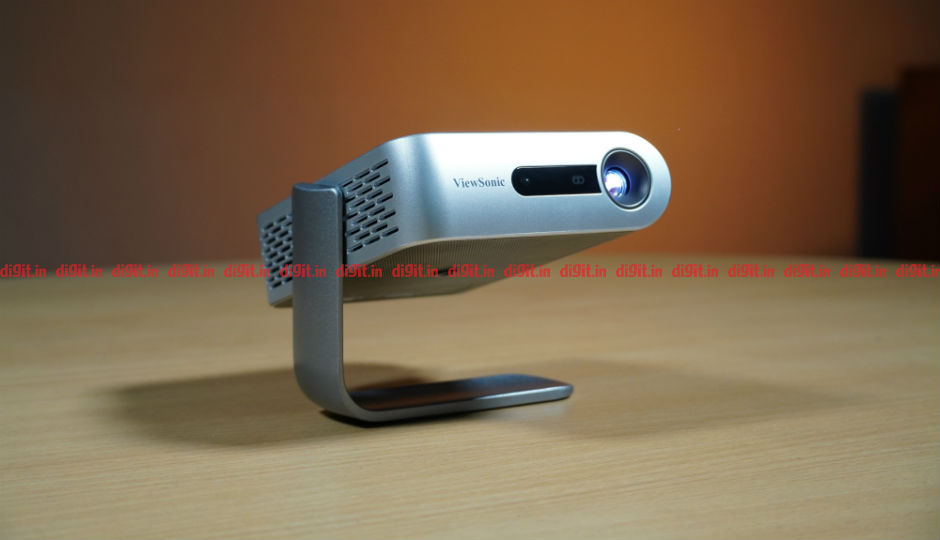 There are quite a few portable projectors available in the market and if you have a budget of about 35,000 there are plenty to choose from. One such projector recently made it to our test labs. The Viewsonic M1 is a battery powered projector with Harman Kardon speakers and it has quite a rich feature-set. It has an MRP of Rs 49,500 but is available online for Rs 35800. Is it a worthy contender for your money in the portable projector category? 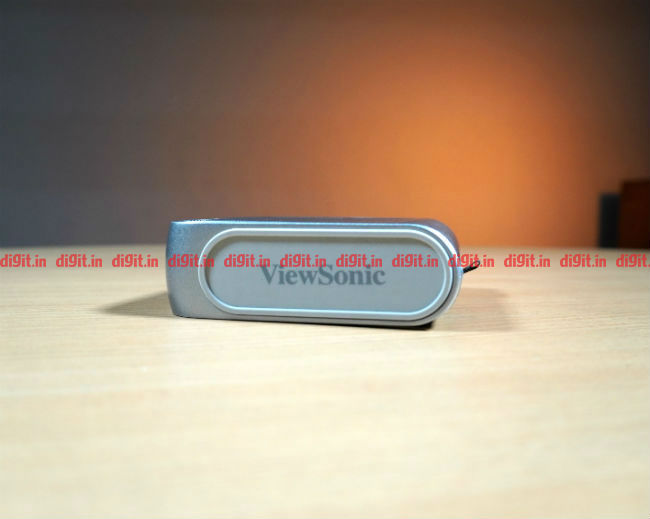 Kicking things off with the build and design of the projector, it isn’t the smallest or the lightest portable projector we have seen but it is compact and portable. It won't fit in your pocket like the Rayo i5 mini projector we reviewed earlier (read our review here) and that's ok as the bigger size brings with it a set of interesting features. The projector has a hard plastic shell with some metal thrown into the mix. It has a gunmetal finish giving it a premium look. It is quite well built considering its size and form factor. The plastic grill on the top of the projector houses the speakers. There is a flap on the side which houses the connectivity options. The bottom of the projector has a standard mounting port.

The physical controls along with an LED battery indicator rest at the back of the Viewsonic M1. The right of the device has vents to let out heat from the projector. On the left, we have the focus wheel as well. 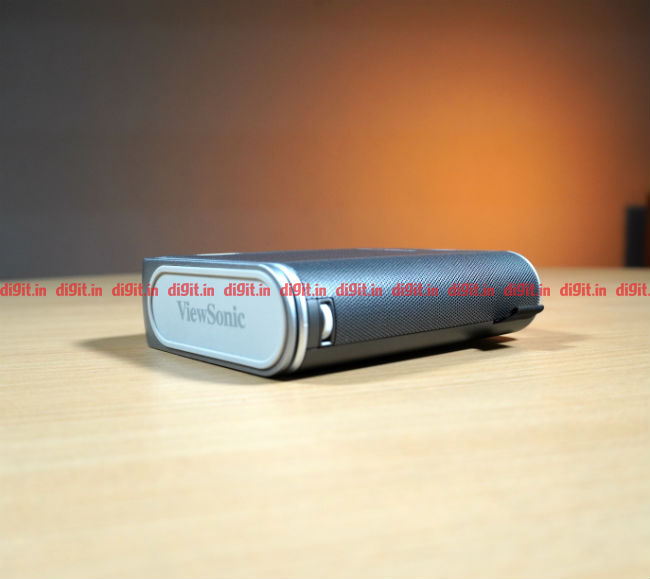 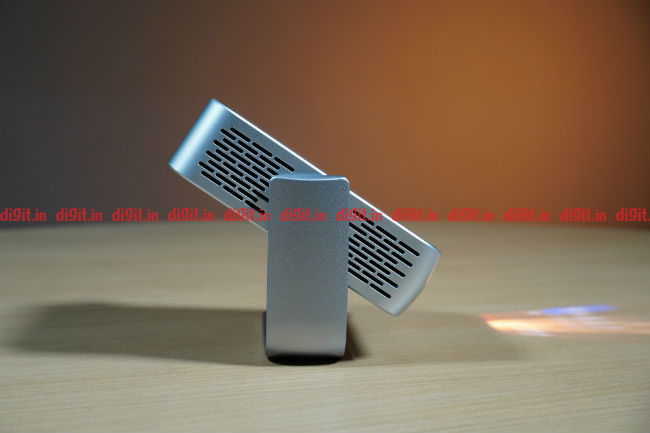 The projector also comes with a remote control in the box which is almost the same dimensions as the Amazon Fire TV remote control. It has all the essential functions like settings, volume, playback, vertical keystoning, and more. It runs on 2 AAA batteries and has a tapering design which adds to the ergonomics. I really like the build and design of the remote control except for one feature. The centre dial houses the rewind and fast forward function along with the vertical keystoning. There are quite a few times I used the keystoning buttons to try and navigate the projector and this takes some getting used to. A small con in an otherwise functional remote control. 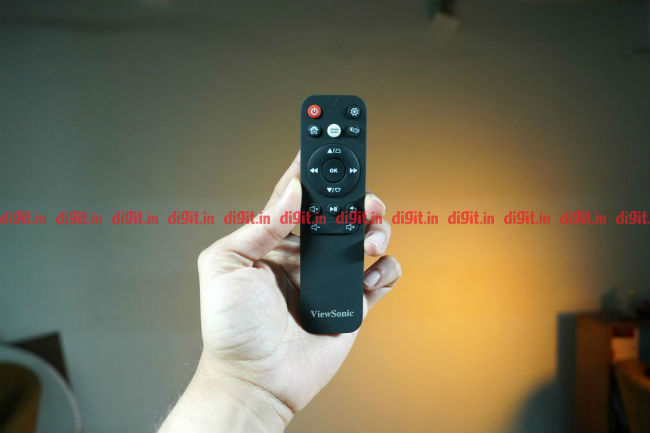 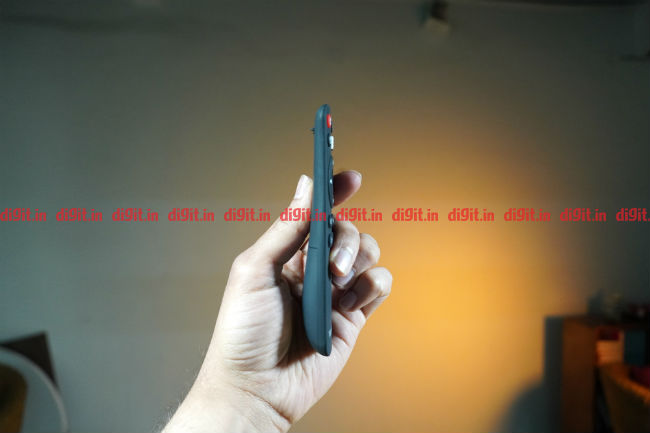 Overall, the build of the projector is very good, better than other budget projectors that we’ve seen in the recent past. The remote control is well built, functional, and you don’t need to point it at the projector directly for it to function which is nice.

When it comes to connectivity options, this projector has them all. On the left, you have the focus wheel. Below the focus wheel, you have a flap that hides a microSD slot, the DC in, a USB-C port, HDMI port, headphone out and a USB-A port. You can use the headphones out to connect the device to a pair of speakers but that’s something you may not need to do as the projector boasts of speakers by Harman Kardon. More on that in the performance section. 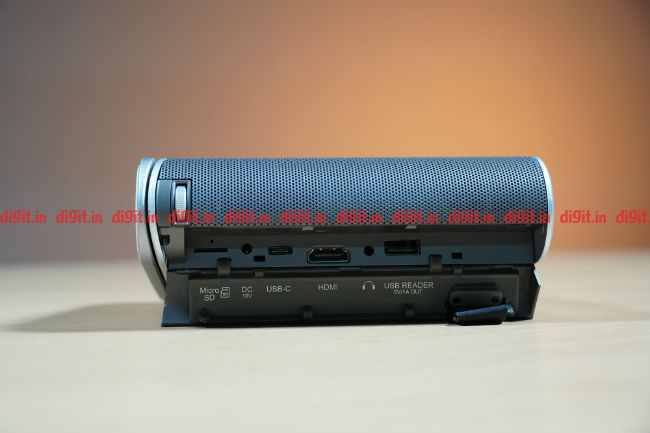 Setting up the projector is a breeze. You power it on and you are in the UI. there are no smart capabilities like Wi-Fi connectivity or apps which is okay. This is a projector meant to be used on the go with a host of connectivity options. When you fire up the projector, at the top you have the source selection options and at the bottom right you have things like settings, wallpaper and information. You also have a battery indicator in the top right corner.

Setting up the projector is as easy as plugging in your desired source and hitting play. It also has 16GB of built-in storage so you can copy your favourite movies or TV shows or even music to it from your USB or SD card eliminating the need for an input source. 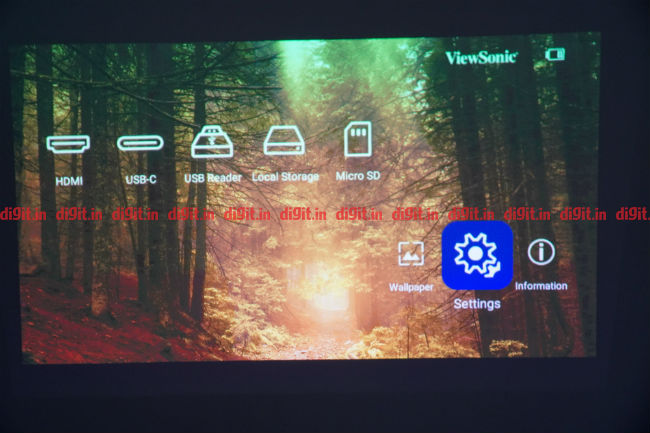 When it comes to performance, we tested the projector using the HDMI and USB source. For the HDMI, we connected a Fire TV stick to access our streaming services and used the USB port to playback video and music files.

When it comes to the visuals, the projector can give you a hundred-inch screen from a distance of 9 feet, but we say, don't go that far. The projector has a WVGA resolution of 854x480 pixels which isn't even 720p. Sticking to around 50-inches works but we wish the projector were 720p at least as the trained eye can see the low resolution.

While playing back videos from the Fire TV Stick, we saw movies like Mission Impossible: Ghost Protocol, John Wick and some Young Sheldon. The Viewsonic M1 projector does an excellent job of immersing you especially if you dim the lights. It will work well with a few lights in the room but you will need to bring up the brightness of the projector to full. Visually, the projector works quite well despite its low resolution. The red circle fight sequence in John Wick in a nightclub filled with blacks, blues and reds, mixed with a lot of gunfire was exhilarating to watch. Even the audio from the projector was engaging. It isn't the clearest we have heard when thinking of the audio quality alone but consider the fact that it is packed into this tiny projector and you will be impressed. At a little less than 50 per cent volume, the speaker from this projector delivered quite a bang in the action sequences while maintaining clarity in dialogue. 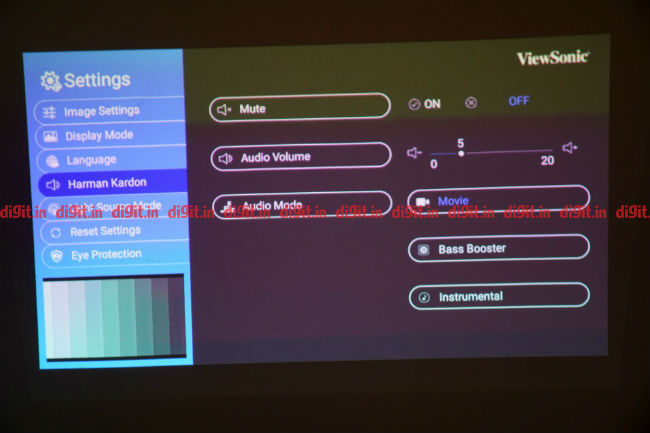 Moving over to shows like Young Sheldon, where the vocals are more important, you are met with clear dialogues which are loud, and very well audible.

Moving over to music, with a little tap of the Harman Kardon button on the remote control you can change the audio preset of the projector or if you want, you can do so by delving into the settings of the projector. Once again, we have heard dedicated Bluetooth speakers that sound better than the speakers in this projector, but considering the package on offer, they sound pretty good. Even when you hear a song like Starboy by Daft Punk, the bass is punchy mixed with electronic music. It made me bob my head.

You also have a bunch of display modes to choose from such as Brightest, Standard, Theatre and Music. All of them are self-explanatory with the music mode disabling the display to give you better battery life. Speaking of battery life, Viewsonic claims 6 hours of playback and if you use the device conservatively, you can get there. However, bump up the brightness, crank up the volume and you have a portable experience that will last shy of 4 hours. That's 2 Marvel movies I got through on the Viewsonic M1. 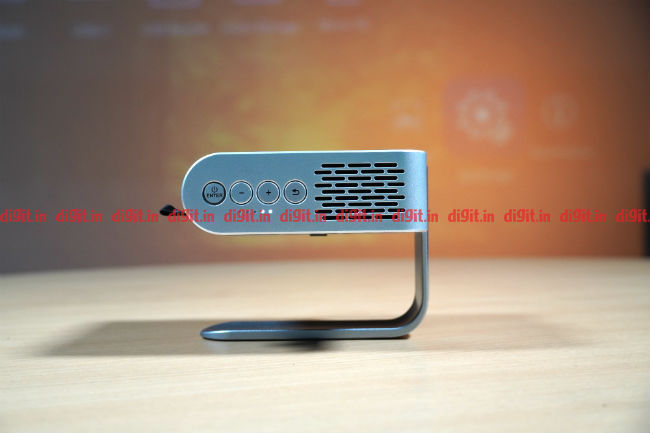 Moving away from the audio-video performance, the projector has a few handy features worth nothing. Most important of them is auto keystoning. When you angle the projector, the image appears like a quadrilateral, or a trapezium or even a rhombus at times. You can manually adjust the corners (using the keystone alignment) to get it in the right rectangular shape, or you could let the projector do it for you by simply switching the “auto keystone” feature on. This is a really handy feature as it ensures you get the picture just right.

By now you think we absolutely love this projector and you’d be right in assuming so. Considering its size, price and performance, it is impressive. However, there are a few niggles we have with the device. The first one is the placement of the keystoning button on the remote control. Pressing this by mistake automatically disables the auto keystone feature which has to be enabled manually by going into the settings. The other is the resolution, which we wish was 720p. The last is the fact that despite the vast array of formats the projector recognises, it didn't read some of the audio from our movie rips. We played Spider-Man: Into the Spiderverse and we have a 4GB rip with Dolby 5.1 audio. The file is an h.264 mkv file and even though the video ran butter smooth, it failed to give us a sound output. Other files like MP4, AVI, etc. ran without a hitch. Since the UI is Android-based, we wish the device came with a version of VLC or MX player to decode all file formats. 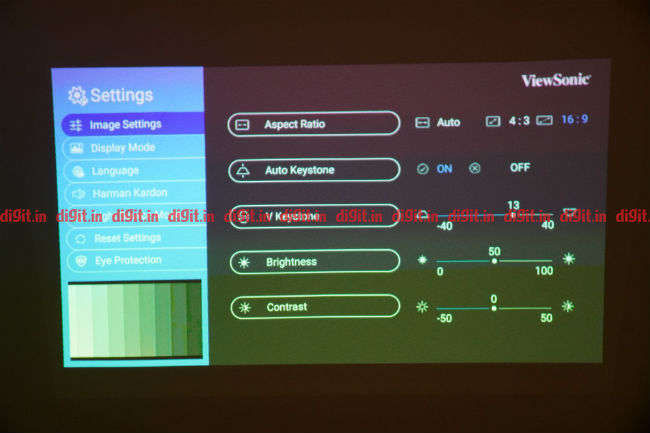 For a street price of about Rs 35,000 online (MRP Rs 49,500), the Viewsonic M1 projector powered by Harman Kardon speakers is a treat for those looking to enjoy content on the go. It has good sound output, a host of connectivity options, and battery life that can get you through 2 movies with ease. It is well built too. On the downside, we wish the resolution were 720p at least and it recognised the audio format from some of our video files.