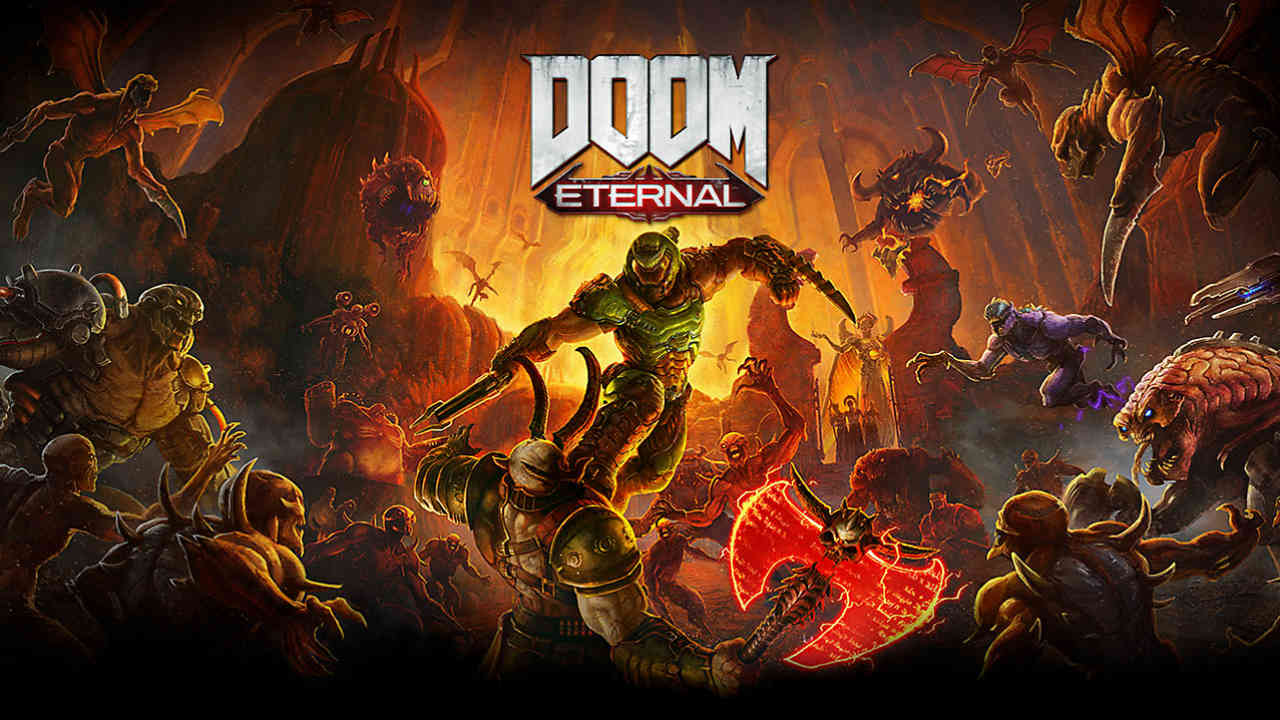 Doom Eternal Review: Rip and tear, until it is done!

Doom Eternal is a first person shooter game that will release on March 20 for the PS4, Xbox One and PC. The game is a sequel to 2016's Doom.

Calling Doom Eternal one of the most anticipated games of the year would be an understatement. 2016’s Doom was not only well-received but laid the foundation for a new generation to experience a franchise that gave birth to the first-person shooter genre. Doom Eternal aims to surpass the expectation set by its predecessor. Let's face it, all the previews of the game out there call this a fantastic game. Previews say that after playing Doom Eternal, 2016’s Doom feels like a relic. Is this true? Is this the sequel we’ve been waiting for? Or is this Doom 1.5? Read on to find out!

One thing that was hyped up is the Story of Doom. Is this the same Doom guy from the original games? Is this a reboot? Is it a continuation like God of War on the PS4? Well, let's break it down without spoiling anything. You play as the Doom Slayer, the same from 2016’s Doom. The forces of Hell have invaded Earth and it is up to you to teleport from your Fortress of Doom down to the planet's surface to wipe out the invasion. It is literally a one-man army against an entire planet. The stage is set and the story is pretty straight forward. There is a twist that I won't spoil here, but fans of the franchise will be happy with the story. For someone like me, I was excited to see more story elements in the game but as someone that loves a good cutscene elaborating on the lore of the story, I was left a tad disappointed. Don't get me wrong, there are a lot of codex entries to be found that give you a ton of background information along with a resistance radio broadcast that highlights what's happening on Earth but in the form of good old fashioned cutscenes, there is not a lot. There is just enough to justify your movement from point A to B. Without spoiling anything I'll leave it at this - the story left me with more questions than it answered. 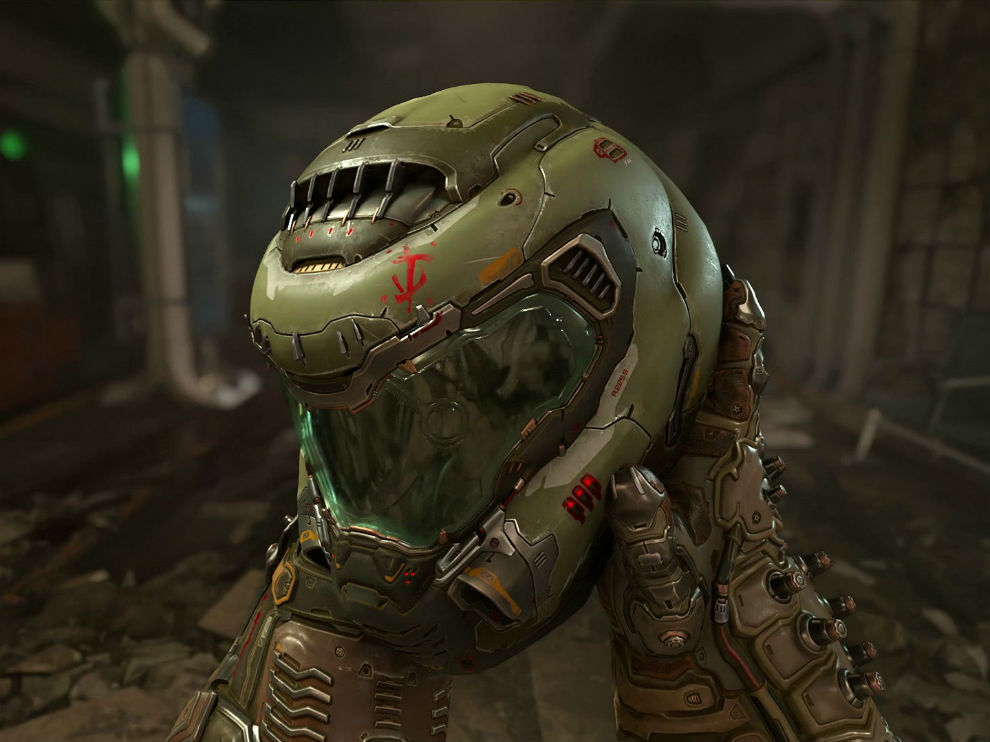 A combat puzzle is how the developers describe the gameplay in Doom Eternal and it is the best way to describe what's going on in the game. The gameplay is an evolution of what we saw in 2016’s Doom. You get abilities like double jump, dash, and alternate fire on your weapons early on. The biggest change to note is that there is no pistol with unlimited ammunition in the game and you have to strategically think about what you are doing. Strategic thinking needs to be second nature in the game as each weapon and ability has an impact on the demons you take on. For example, there are Zombies and Imps littered throughout for you to chainsaw for ammunition. However, they aren't just props and will come and attack you the first chance they get. At every turn, the game will throw an overwhelming number of enemies at you, each with their own vulnerability and strategy to take down. The demons aren't standing around either, even at the easiest difficulty, they come at you with a lot of aggression. The bigger demons include the Mancubus which will hurl fireballs at you from afar and set the ground on fire if you get too close to the Cacodemon that hurls projectiles at you from afar and even the Arachnotron that is a spider-like creature that fires energy shots from its weaponized tail.

The game throws newer demons at you as you progress, increasing the challenge and making you think on your toes as to what is the best strategy to take them down. You could fire a flame belch and make your foes bleed armour, glory kill a stunned enemy for health, chainsaw one for ammunition, fire a sticky grenade at the tail of the Arachnotron to disable its projectiles, fire a grenade in the Cacodemon's mouth to stun it, snipe the Mancubus’ hands to destroy its weapons all the while praying that a Revenant doesn't pop into the fight. It is intense and will keep you at the edge of your seat with each encounter forcing you to not only switch your weapons but the mods as well.

The developers say that they have doubled the number of Demons you encounter in the game and they are introduced at regular intervals to not only keep the experience fresh but challenging as well. 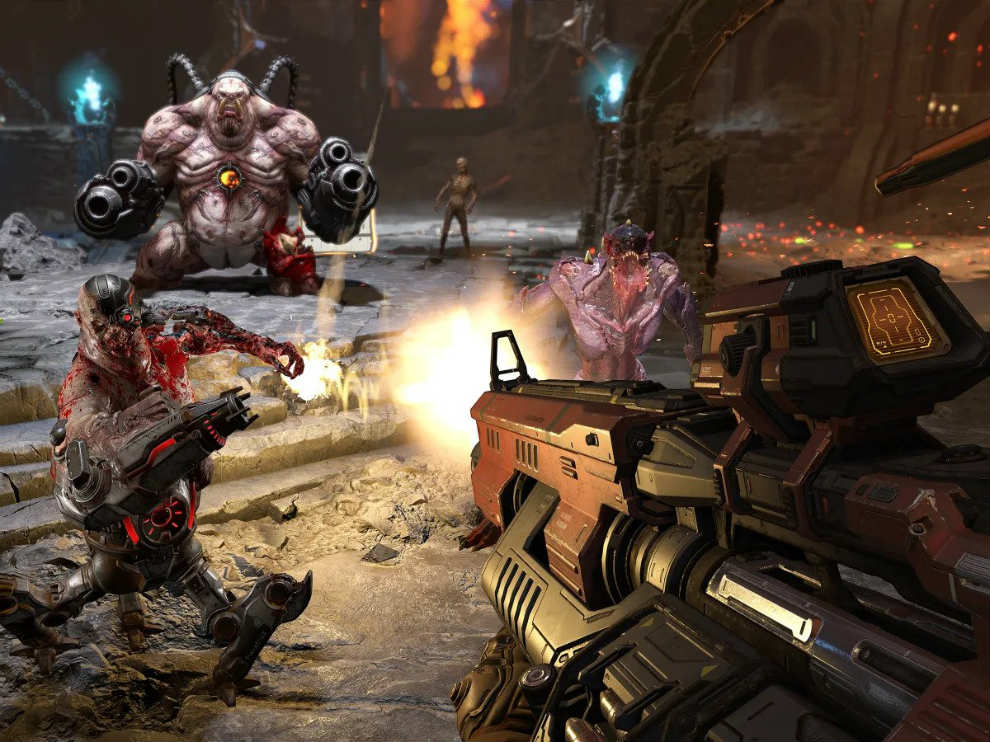 Coming to your arsenal, you have a number of guns at your disposal including the Combat Shotgun, Super Shotgun, Heavy Cannon, Rocket Launcher, Plasma Rifle, BFG 9000, Ballista and more. Apart from the BFG and the Super Shotgun, each gun has 2 mods that can be unlocked and the mod's abilities can be upgraded as well. The Combat Shotgun can be modded to house sticky grenades and rapid-fire. The Heavy Cannon can be equipped with the sniping mod and mini-missiles mod. Each mod makes the weapon rather dynamic to use and can be quickly equipped to get you out of a sticky situation. Unlike 2016’s Doom, Doom Eternal cannot be beaten by the shotgun alone.

There are some new abilities at your disposal as well. Connected to the left hand is a blade that can only be used during glory kills. On your left shoulder is a grenade launcher that can either launch traditional grenades or freeze grenades. You also gain an ability called Blood Punch which essentially takes out a number of small/weak foes in one swift punch or can significantly weaken heavier foes. There is a cooldown time between using a blood punch, grenades and the dash and all this information is in front of you on the screen, ensuring you keep an eye on these meters. This all amounts to a lot of diversification in the gameplay. The beauty is that it forces you to master a lot of these weapons and their mods to get through the game. Overall, the gunplay is the star of the show and the aggressive enemy AI is what will keep you at the edge of your seat. Each ability and equipment you have can be upgraded adding an RPG element to the game but it isn't complicated at all.

As fun as the combat in the game is, the platforming sections are a mixed bag. Jumping across a pool of lava with a rotating fire pole can give you the feeling of playing Mario in first person. But later on in the game, you need precise jumps and dashes to get from one ledge to the other and this can get frustrating at times. Missing the pole or even a dash can lead to you doing the platforming all over again. The platforming elements like poles to swing over, dash and even jump pads and portals all add strategy to combat, but the general traversal can get annoying at times.

Overall, the gameplay in Doom Eternal is its strongest suit and if you liked 2016’s Doom, you will love what Eternal has to offer. If you love FPS games in general, you will be enamoured by the diversity and thinking this game requires you to do to survive an encounter. It is a move in the right direction and one that will keep you coming back for more. 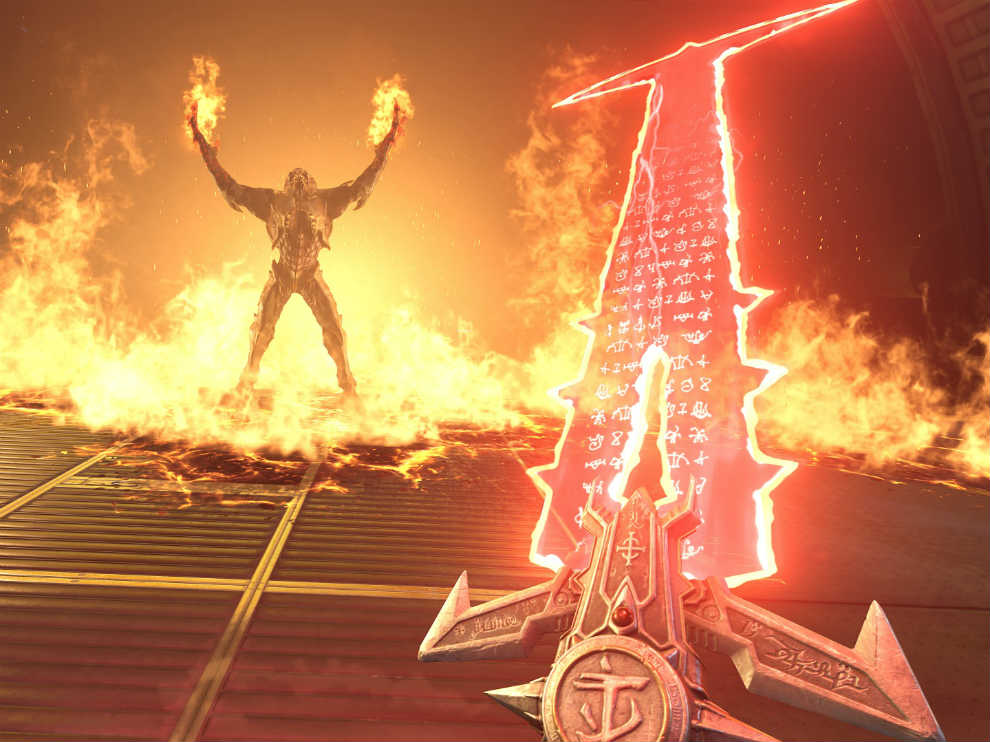 Doom Eternal is running on id Tech 7, id’s latest and greatest engine. The developers claim that the game has the ability to run at 1000 frames per second on capable hardware and you can read more about it here. We played the game on an Xbox One X and the developers have informed us that on the console, the game runs at 1800p upscaled to 4K at 60 frames per second. We played the game on an LG 2019 OLED TV and can confirm that the game looks breathtaking. From the sprawling devastated environments of the earth to the metallic spacecraft meets castle Greyskull Fortress of Doom, the environments are really large with the only loading screen appearing when you die or finish an entire level. There is no other way to say this - the environments are so large, they could give the likes of Metro Exodus a run for their money.

Moving to the Demons, each one of them sheds skin, muscle, and bone with every gunshot giving you a visual reference for every hit. Visually, the demons are detailed with fluid animations and movement giving them a life of their own. Even the weapons in the game, in the hands of the Slayer, looked detailed with convincing lens flares, recoil, and animations. The game is beautiful and a testament to what the developers can squeeze out of current-gen machines. 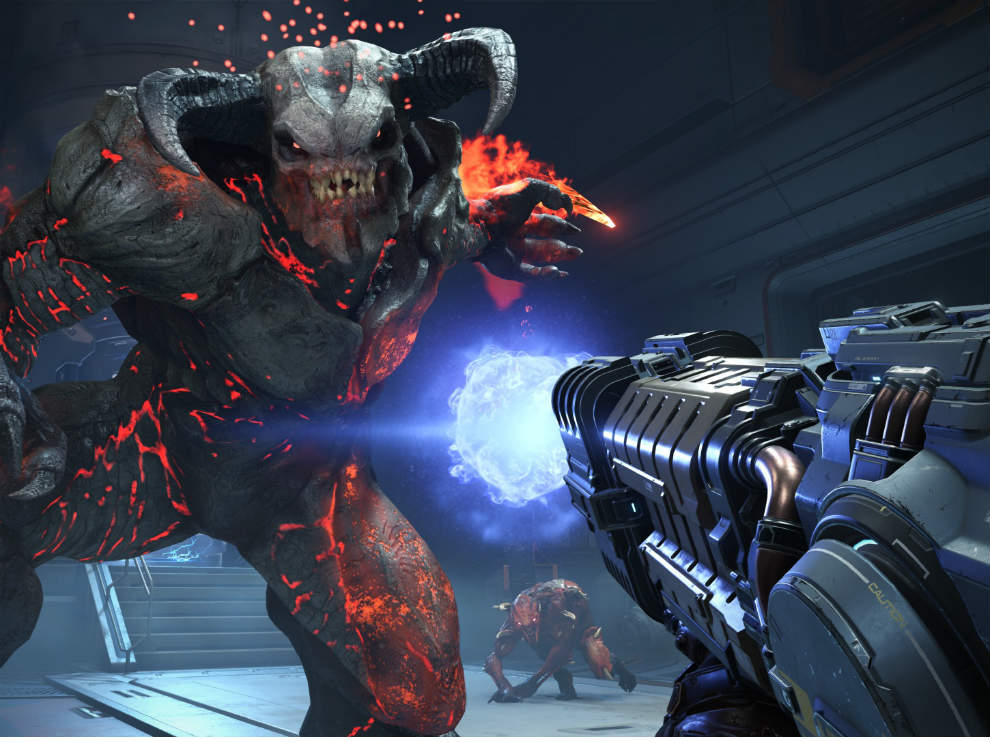 All hail the legendary Mick Gordon. Not only is the soundtrack of Doom Eternal amazing, but it is perfectly synced with what's happening on screen. There is a sombre silence when you are traversing the environment with the wind gushing in the background. Then all of a sudden the music starts - soft yet intense. You approach a large opening and as soon as you hear a demon appearing, the music picks up, loud and intense, and the hair will rise at the back of your neck preparing you for battle. Even the difference in the thump of the Combat Shotgun and Super Shotgun is different to be identified by sound alone. The feedback of the heavy cannon gives you the feeling of wielding a weapon of power. Each sound in the game is a subtle cue to something that is happening or about to happen and is one of the best in the world of videogames right up there with Uncharted 4 and The Last of Us. If you have a pair of nice headphones or a good pair of speakers, be prepared to bring the house down. 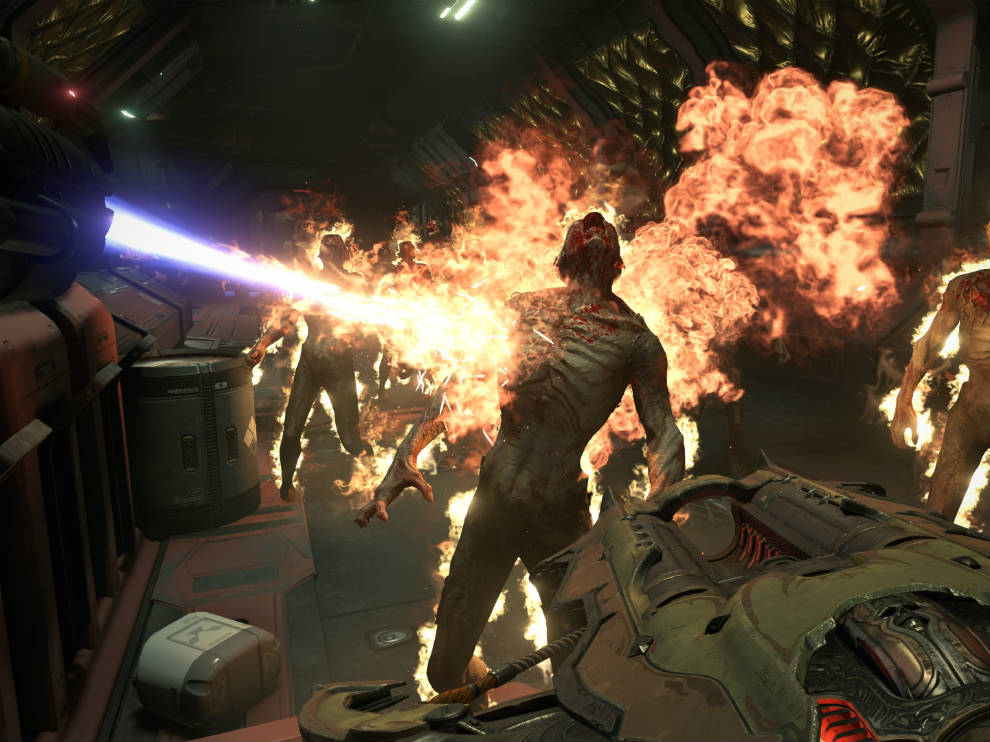 Doom Eternal has 13 chapters and for those that want to run through it can do so in one weekend. But that's not the appeal of the game. The appeal is to find the difficulty that challenges you, learn the strategy, explore the secrets of each level and then come back for more. Going back and revisiting completed levels with new abilities, higher difficulty and some tricks up my sleeve, I enjoyed the game even more. With each encounter I became better, a more seasoned slayer with an arsenal to destroy demons. With each increase in difficulty, I changed my strategy and came back for more. This doesn't include the multiplayer which was not live during the review period. But the single-player in the game is more than enough to keep you coming back to rip and tear until it is done!