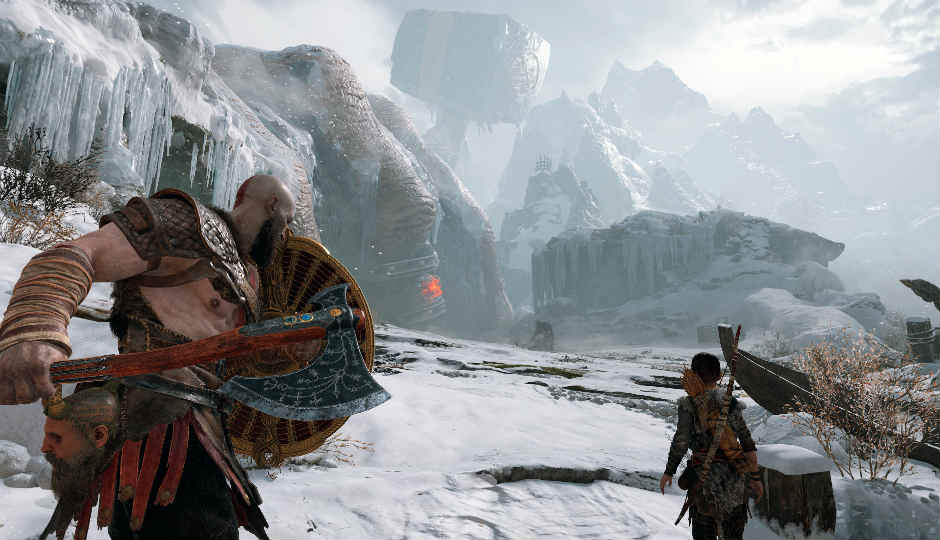 Kratos’ latest adventure releases on April 20. After playing and reviewing the new God of War game, here are 5 things we can tell you before you decide to buy the game.

Sony Santa Monica, the masterminds behind the God of War franchise have been hard at work for the past 5 years reimagining Kratos’ adventure and bringing it to the PS4. God of War releases for the PS4 on April 20 for Rs 3,999. The game is 45GB (approx) in size to download from the PlayStation Store. It also has checkerboard 4K support for the PS4 Pro. If you are skeptical about picking up the new game, then you can check out our review here. In this story, we list 5 things you should know about God of War before buying the game.

Free roaming camera with no cuts

Yes, that’s right. The camera is no longer locked and can be controlled by the player. This brings a whole new perspective to the game enhancing gameplay and combat. You have absolute control over where to look. The camera is also really close behind Kratos giving you an over the shoulder look. This helps immerse you in combat scenarios.

No camera cuts have been a large talking point about the game and we’d like to tell you that’s its near perfect. Some trickery has been used to mask loading screen when fast travelling and this is done very well. The only time the camera cuts is when you pause the game to check out the map or when you die.

Overall, the free camera is a welcome change and one that you will get used to immediately.

Kratos’ weapon of choice this time around is the Leviathan Axe. It works a lot differently when compared to the blades we’ve come to love from previous games. The axe gets you close to your enemies. You also have the ability to throw the axe and recall it at will which is a nice touch. From the animation, sound design and even the feedback of the controller, throwing the axe is a satisfying experience. You also have the ability to upgrade the axe in terms of its capabilities as well as magical abilities. Two magical abilities can be equipped at a time (light and heavy) but there are a number of light and heavy magic attacks you unlock through the course of the game to add variety.

Kratos’ son, Atreus has a quiver full of arrows and you can command him to shoot them at your foes. This not only adds a secondary projectile in your arsenal, but also adds diversity in the way you tackle combat.

All the previous God of War games have been rooted in Greek mythology. This time around Kratos’ is delving into Norse mythology. Most of your time will be spent in Midgard but there are other realms that you visit too. Kratos is still a Spartan and his Spartan rage is present in the game, a testament to his origin.

The game brings to light a number of Gods and Norse myths and those that are fans of mythologies will have a blast on this journey.

In past God of War games, Kratos has been a one-man army. This time around he has a companion on his journey. Atreous, His son who not only aids him in combat but gives him a lot of information about the Norse world. The relationship between Kratos and his son evolves throughout the game.

The last thing you’d expect from a God of War game is humour. However, the introduction of Mimir adds some light hearted humour to the game. He is knowledgeable about the Norse world and steals the show as far as sarcasm and stating the obvious in a funny manner is concerned. He also tells you tales of Norse which serve as a back story for a lot of what’s going on in the game and there are times when you will find yourself putting the controller down to let him finish what he’s talking about.

In our review of God of War, we said, “If you are a God of War fan, don’t fear the changes in gameplay; embrace them. There is a learning curve and once you got the hang of it, there’s no turning back. When it comes to experiencing God of War, the story is deep, the gameplay is satisfying and the visuals are stunning. If you like games like Bloodborne, Dark Souls, DMC, and Horizon: Zero Dawn, then you should definitely give this one a go. You will be left wanting more.”